This Investing Advantage Could Be the Secret to Massive Wealth
By Matt McCall
Wednesday, October 28, 2020

We sit on the verge of transformation.

A handful of innovations are about to change our world in the same way the Internet did in the 1990s. And informed investors stand to make gains similar to – possibly even larger than – those during the Internet boom.

The reason I say this is simple... It's the convergence of multiple innovations all at once.

Back in the 1990s, it wasn't just a computer revolution. It was computers PLUS the Internet PLUS microprocessors PLUS cellular phones. Each innovation helped drive the growth of others.

Now we have 5G, artificial intelligence, precision medicine, the Internet of Things, virtual and augmented reality, biotech, blockchain, and more. This convergence is enabling new businesses to run with unprecedented efficiency and productivity... and allowing them to create wealth faster than ever before.

This is the secret to building massive wealth during this tech boom. Let me explain...

Exponential progress is progress that multiplies in power and scope with each step. Profits also multiply.

Here's an old legend that helps illustrate the power of exponential growth...

Hundreds of years ago, a king invited a traveler to play a game of chess.

The king loved chess and wanted a challenge. He told the traveler that he could name his reward if he won the game.

In response, the traveler modestly asked for some rice. He asked the king to give him a single grain of rice on the first square of the chessboard and then give him double the amount – two grains – and place it on the next square. Then the king had to double that amount – four grains – and keep doubling for each square on the chessboard.

But by the 16th square, the numbers were getting very large and the king very uneasy. He owed the traveler 32,868 grains of rice on that square.

That is the power of exponential progress.

The way to achieve exponential profit growth is to invest early in smaller stocks that still have that kind of potential.

That's how the biggest gains were made in legendary wealth-builders like Microsoft (MSFT), up more than 342,000% since it went public in 1986. Take a look... 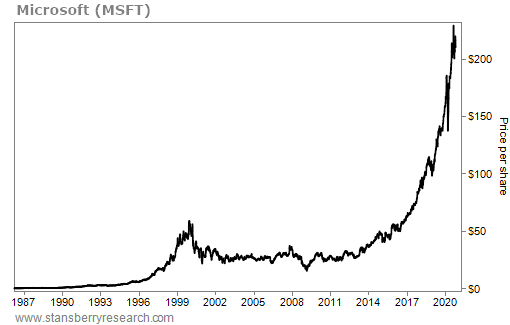 Now, if you bought Microsoft today, at a $1.6 trillion market cap, exponential growth would be almost mathematically impossible. It will take Microsoft years to double its current revenues or profits.

But back when Microsoft was valued at $1 billion... or even $100 million... it was an outstanding place to put your money.

And on and on.

My advice is to think big. Anyone who focuses on just one tech theme – no matter how massive it may be – is missing the boat.

Yes, 5G and biotech will both be huge. But by working together, innovation upon innovation, the gains will be truly epic.

Everyone knows Amazon (AMZN). It's a monster stock market winner. But not everyone recognizes why it's up so much. It's the synergies of top-notch web services PLUS powerful cloud storage PLUS phenomenal logistics PLUS world-class artificial intelligence. 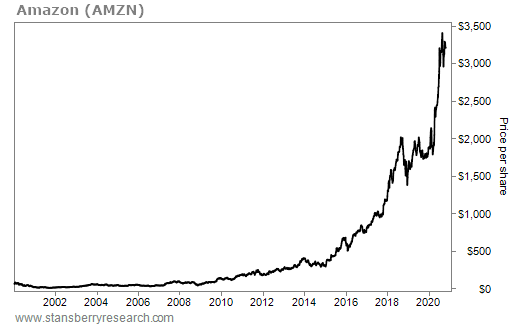 Knowing this difference between linear growth and exponential growth instantly sets you apart from your fellow investors and gives you a huge advantage. It can make you millions of dollars over the coming years.

When it comes to extreme wealth creation, almost nothing can compare to being an owner of a small company that grows large.

At this particular moment in history, there are dozens of stocks with that kind of potential. They're all around us right now.

Why not try to find and own them?

Editor's note: Recently, Matt joined us as a special guest during Steve's Melt Up event. He shared the No. 1 stock he recommends owning today... a chance to get in early on a company that's shaping "the future of medicine." To learn the name and ticker – and to find out why stocks could soon soar to unimaginable heights – check out our replay of the event... Click here before it goes offline.

By now, you know that interest rates and government stimulus make stocks the best place for your money today. And with all the technological breakthroughs happening now, there has never been a better time to hold this type of stock... Get the full story here.

"We'll see the world change more rapidly than any other group of people in history," Matt writes. Every aspect of our lives will be completely changed and new industries will be created at a breakneck pace. Be sure you're invested in the right areas to take advantage... Read more here: This 'Law' Is Setting the Stage for Outsized Returns.

Today, we’re looking at a company that’s aiding the fight against this pandemic…

As states have continued to reopen businesses, COVID-19 is still spreading. With more than 8.6 million cases and over 220,000 deaths in the U.S., medical companies are hurrying to develop a vaccine… But to do it as quickly and successfully as possible, they need devices, services, and chemical substances. Today’s company is helping researchers create and test vaccines efficiently…

Repligen (RGEN) is a $9 billion leader in bioprocess engineering. In broad terms, its products help companies make drugs that are based on living cells. Repligen’s technology has already helped narrow down an effective method for developing purified COVID-19 vaccines… And the company reported record quarterly revenue of $87.5 million in the second quarter – totaling 24% year-over-year growth. That was partly due to a big uptick in orders related to COVID-19 vaccine development.

As you can see, after dipping in late February, RGEN soared nearly 110% to a new all-time high. As medical workers and companies continue to race for a COVID-19 vaccine, this uptrend should continue… 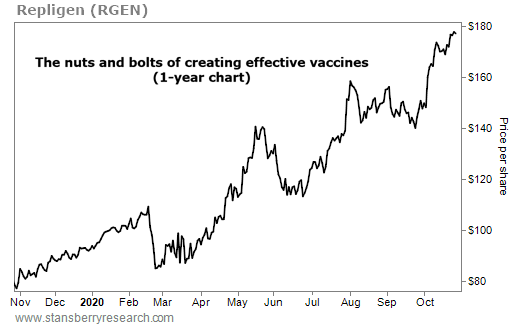