"Amazing things happen at the intersection of imagination and technology."

I couldn't agree with him more. I'm constantly astounded by how technology turns innovative ideas into valuable, world-changing intellectual property.

This combination has become a cornerstone of what I look for as an investor. It's the perfect recipe for outsized growth.

As an example, consider what a small company you've likely never heard of is doing to help one of the world's greatest athletes step up his game...

Because the arc of the ball is one of the most important elements of a successful shot, the company adopted the name of the biblical ark builder, Noah.

Marty's idea started out as nothing but a rake and a ladder in a driveway – the setup he rigged to teach his daughter to play basketball. Since then, it has morphed into a data-analytics firm employing machine learning and artificial intelligence ("AI"). The firm's top data analyst is none other than the little girl who helped her dad launch the business many years ago.

Armed with this insight, the company then created the Hoops app...

With your smartphone's camera positioned along the side of the court, the app uses AI to measure thousands of data points in real time for every shot you take. Then it provides instant feedback on the shot's entry angle and depth. This enables you to take the same shot over and over, building the muscle memory for the perfect shot.

According to Noah's website, which is updated regularly, the company has tracked more than 330 million shots.

Many of those shots have been taken by one of the greatest athletes to have ever played the game, the Golden State Warriors' Stephen Curry. If you've never watched him play, I recommend you check him out. He regularly makes shots from distances that are unimaginable for us mere mortals.

Noah's data wasn't available when Curry joined the NBA in 2009. But now that it is, he has been using it to perfect his three-point shooting and get even better. That's bad news for everyone else in the league...

A shot can stray five inches from the center of the basket and still be successful... but only 55% of the time, according to Noah. So, Curry honed his skills this past summer, drilling shots within just three inches of the hoop's center, where the probability of success soars to 74%.

And keep in mind that the NBA-wide average for three-point shooting success has been stuck at 36% for two decades. Meanwhile, Curry consistently sinks 42% of the game's most difficult shot.

I like the way Ben Cohen of the Wall Street Journal puts it: "This knowledge of the previously unknowable is a glimpse into the future of training."

Eventually I expect athletes at every organized level – from local leagues to college teams to the pros – will find Noah's intellectual property too valuable to ignore. Setting up an iPhone at the edge of the court with the Hoops app running will be just as common as having a cooler full of Gatorade on hand. And when it happens, it'll create an absolute fortune for Marty...

Noah Basketball is still a small private company, so you and I can't participate in its tremendous growth as investors. However, you can invest in great ideas just like it.

It comes down to that intersection of imagination and technology. But I'll be honest – there is one more key ingredient...

You must get in early enough to capture the biggest potential gains.

First, look for smaller companies most investors have never heard of. Then, as their products and markets mature, you can unlock opportunities to make life-changing returns.

Most stocks simply can't become 10-baggers in a three- to five-year window. But with the technology to "unlock" the true value of a winning idea – and with the right entry point for your investment – you'll stand the best chance of finding those that can.

P.S. Since sitting down to write the just-launched inaugural issue of 10x Investor, I've been on the edge of my seat watching most of the 10 stocks I recommend climb higher for months... With no end in sight for this trend, you must act quickly for the best chance at 10-bagger returns with these little-known gems. To get started on a profitable 2022, click here for all the details.

"Long-term investors need a new portfolio playbook," Mike says. With interest rates near zero, simply holding bonds and cash is no longer an option if you expect any sort of return. That's why it makes sense to add exposure to this asset today... Learn more here: It's Time to Rethink Your '60/40' Portfolio.

"When it comes to extreme wealth creation," Matt McCall writes, "you can't do much better than simply owning a small company that grows large." And with the upcoming technology trends that are likely to disrupt the markets, it's important to have the right mindset to benefit from the big winners... Read more here.

Today’s company is a leading homebuilder…

Regular readers know that Steve is bullish on the U.S. housing market. The combination of low interest rates, lack of inventory, and major demand has fueled a boom in the sector. Today, we’re look at another company that’s riding this housing wave…

NVR (NVR) is a $19 billion homebuilder and mortgage banker. As one of the largest homebuilders in the nation, you may recognize NVR’s brands: Ryan Homes, NVHomes, and Heartland Homes. And the company is benefiting from the big trend in U.S. housing right now. Although earnings per share missed Wall Street’s expectations last quarter, NVR confirmed that demand for new homes is still strong. And homebuilding revenues increased 22% year over year to $2.34 billion during the quarter.

NVR shares are up around 250% over the past five years. They recently hit a fresh all-time high. And as the housing boom rages on, companies like NVR should continue to thrive… 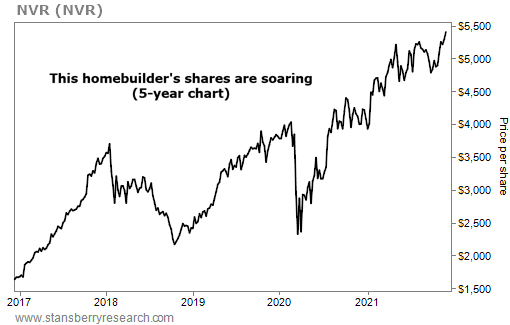