From 'Enemy of the State' to Model Citizen in China
By Vic Lederman
Wednesday, May 29, 2019

China has some unexpected enemies of the state...

They've been charged with "smearing the image of China and the Chinese army." And they've even been condemned for causing "potential harm to the physical and mental development of the young."

The punishment is often a death sentence or a long-term banishment. But occasionally, "reprogramming" is the solution... The accused is rebuilt in the image of the state and becomes a model citizen.

It sounds like the latest spy novel – but these are actual charges against a surprising industry in China: video games. And the most recent story of what's happening in this sector is almost too crazy to believe.

It shows how the most successful Chinese companies strike a balance between capitalism and pleasing the government... and why big profits are possible as a result.

China has an ongoing problem with video games. In short, the ruling party doesn't like them... But the people love them.

Gaming in China accounted for an estimated $38 billion of revenue last year. That puts it among the biggest markets in the world.

It also leaves the Chinese government in a tough spot today. Officials still want to crack down on video games, but they can't completely take them away.

Regulation is the next best option... And as the world's premier autocratic country, China knows regulation. But the government's rules can be ambiguous and unusual. And they're often enforced on an unpredictable basis.

That's the landscape video-game companies deal with in China. It doesn't sound like a position any business would want to be in... But if you can successfully navigate the rules, your business can tap into the seemingly limitless Chinese market.

The road hasn't been easy. In March 2018, China shook the video-game industry when it stopped approving new titles... Then in August, the government made the move official. This lasted for months. And Chinese gaming companies suffered as a result.

After flexing its muscles, the government loosened its grip. China started approving new licenses again in December. But the message came through loud and clear...

China is getting stricter about video games. And it won't be shy about its enforcement.

That brings us to the wild story happening in the Chinese gaming market right now...

One of the casualties of China's gaming ban last year was the smash hit PlayerUnknown's Battlegrounds, also known as "PUBG."

PUBG is a "battle royale" game... The goal is to outlast everyone else. It's mindlessly violent. And it's bloody.

But Tencent failed to win the Chinese government's approval to monetize the game. So it dropped the game altogether and chose the "reprogramming" path...

It remade the game into a model citizen.

It's now called Game for Peace. No kidding.

To be clear, the game plays a lot like PUBG... The mechanics are the same. The action is the same. And the maps the players fight on are still the same. But the elements the Chinese government finds distasteful have been removed...

Dead bodies simply disappear. And there's no blood. (Remember, this is a game where players shoot each other.) Now, when your enemies are killed, they happily wave goodbye.

And the game's story has taken an unusually patriotic turn... It focuses on China's air force. According to a press release, the game "pays tribute to the blue sky warriors that guard our country's airspace."

In the U.S., watering down a video game and catering to what the government wants would be the kiss of death. But in China, players will take what they can get. So if the government says your friends should wave goodbye after they die, that's what they'll do.

Most important, these changes mean Tencent finally won approval to start charging money for certain aspects of the game – like it does with PUBG in other countries. Now, players in China can spend their money on all sorts of in-game goodies. And according to reports, Game for Peace brought in $14 million in its first 72 hours.

It's a crazy story. But that's China. And while it sounds absurd to most Americans, it also shows the unbeatable potential of the Chinese market...

Sure, the Chinese government is regulating gaming in a way the U.S. government doesn't. But the world's largest gaming company is Chinese. It found a way to work around the rules it was given... And it'll earn huge revenues as a result.

Many dismiss China as a communist mess. But the simple truth is that China is more capitalist than most believe. Even with a strict government that hates video games, the industry is still immensely popular – and profitable.

It's one more reason we can make big money investing in China during the coming years... as the best companies harness the incredible power of this market.

P.S. Tomorrow night, my colleague Steve Sjuggerud is hosting an emergency China briefing at 8 p.m. Eastern time. Just a few years ago, Steve told attendees at a similar special event to buy shares of Tencent. The stock went on to double in a little more than a year.

This time, he's sharing a new way to profit from another wild setup in China... You'll even get the ticker symbol of the trade he likes best, just for showing up. So make sure you tune in for free tomorrow – you can learn more right here.

"A far better description for China would be 'one-party capitalism,'" Steve explains. Learn more about this misperception – and one way it factors into the U.S.-China trade war – right here: What Americans Fail to Grasp About China.

With China, you have to look at the long-term picture. In fact, the latest step in a powerful multiyear trend just went into effect... sending $16 billion into the Chinese stock market in a single night. Find out why right here.

Today, we’re checking in on a leading military contractor…

Recently, the U.S. sent an aircraft carrier strike group to the Persian Gulf, hoping to cool tensions with Iran. And last week, President Trump said an additional 1,500 troops will follow. It’s the latest example of how the U.S. maintains its military presence across the world – and why you can count on steady business for the companies that support these efforts…

Just look at Booz Allen Hamilton (BAH). This $9 billion firm provides technology and engineering consulting services to a wide range of clients, but the U.S. military makes up more than 95% of its revenue. And with a rising defense budget to handle global tensions, that focus helps boost sales… In its 2019 fiscal year, Booz Allen reported sales of $6.7 billion, 9% higher than a year earlier.

As you can see in today’s chart, shares of Booz Allen are trending higher. The stock is up more than 40% over the past year, and prices recently hit a fresh all-time high. America’s continued involvement in global conflicts should mean more gains for this military consultant… 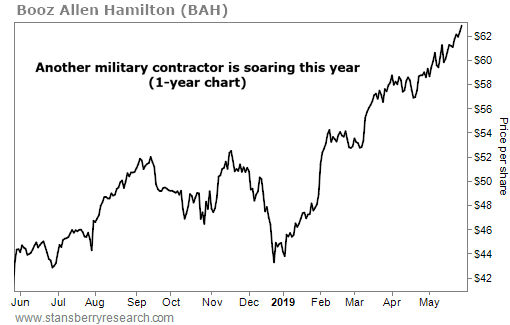