Fund managers are the most overweight equities they've been in years...

In fact, today's bullishness is the highest it has been in 10 years. This isn't the kind of bullishness that should scare you out of the market, though.

While there's plenty of speculation going on, these managers seem to be bullish at the right time.

It's proof that the Melt Up is in full force... and that it can continue. That's because the recent high optimism should mean more upside ahead in U.S. stocks, based on history.

The Bank of America Merrill Lynch Global Fund Manager Survey came out last week. The survey asks more than 200 fund managers questions about the market. And since Bank of America has tracked this data over the past 20 years, it can lead to useful insights.

One of the big takeaways from this latest survey is how bullish the group is on U.S. stocks. A net total of 62% of these managers said they are overweight stocks.

That's the second-highest reading on record. It's only lower than the overweight number the survey recorded in 2011.

That's the Melt Up in action, my friend. Rising stock prices mean everyone is making money. And that makes them want to own stocks in a big way.

It's a virtuous cycle. But it doesn't have to mean the fun is over yet. In fact, these fund managers have a history of being bullish at the right times...

The last example we can look at was when fund managers were similarly overweight stocks in the thick of the latest bull market. That time, U.S. stocks went up 25% from their February 2014 lows to their peak in 2015... And that bull market wouldn't see a 20% drawdown until 2020.

In short, fund managers are overweight stocks in a big way. The Bank of America survey shows the highest overweight rating since 2011. But this bullishness isn't a sign that we should get out.

History shows that these managers tend to be bullish at the right times. It's another sign that U.S. stocks – and the Melt Up – can rally from here.

"I have never seen such a dramatic change from mass pessimism to mass optimism as we have seen this year," Steve says. So what does this mean for the Melt Up today? Find out right here: What This Massive Sentiment Shift Means for Investors.

"Activity in the service sector is at the highest level on record," Chris writes. The worst of the pandemic could be behind us here in the U.S. And that's another great sign for U.S. stocks going forward... Learn more here.

Market Notes
SALES ARE SURGING FOR THIS SPORTING-GOODS LEADER

The COVID-19 pandemic has forced people to avoid gyms, shops, and indoor venues, limiting the activities they can do. Though vaccines are gradually rolling out, folks are still focused on staying active and having fun outdoors as we slowly return to “normal.” And that has helped today’s company thrive…

Dick’s Sporting Goods (DKS) is a leading sporting-goods retailer. It sells items like athletic apparel, shoes, and sports equipment. And it has seen increased demand for its products as folks look for ways to get outside. Even though foot traffic fell at its physical locations, the company saw a 100% boost in online sales for 2020… Dick’s also reported net sales of $9.6 billion for the year, up roughly 10% year over year.

As you can see, DKS shares are rocketing higher… They’re up a massive 400% from last year’s lows. And they recently hit a fresh all-time high. As long as folks continue to search for ways to stay active, this stock should perform well… 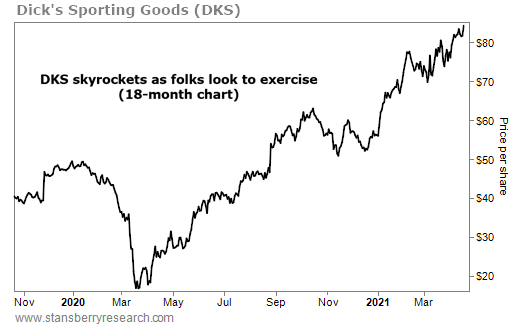