An Investment Trend You Can't Afford to Ignore
By Brian Tycangco
Friday, September 11, 2020

They're big, clean, full of variety, and everything's usually on sale.

Take the American Dream mega-mall, for instance. It partially opened for the first time last year in New Jersey. Once it's complete, it will feature more than 450 stores, covering roughly 3 million square feet of retail space. It even has an indoor ski slope.

But what if I told you that the last large mall like this one to open in the U.S. was New York's Palisades Center... back in 1998?

That was more than two decades ago. And I'd guess that you probably can't recall the last time a new mall opened up near where you live.

In Asia, it's the complete opposite.

Shopping malls have been popping up just about everywhere in this region. Many of them make the American Dream mall look tiny in comparison. And this trend is something you can't afford to ignore.

The Iconsiam... CentralPlaza WestGate... SM Seaside City Cebu. Do any of these names sound familiar to you? Probably not.

These are just examples of malls that have opened in Asia (outside of China) over the past five years. And each of them is nearly twice as big as the American Dream mall.

All of the world's 15 largest malls are located in Asia, including four in the Philippines where I live.

This is showing us where the middle class is growing fastest. And I think it paints a clearer picture than any number out there.

That's because shopping mall operators only build when and where they see a good market. That means enough people who want things like home appliances, furniture, casual dining, movie theatres, and personal care services.

The businesses that set up shop inside malls do their homework, too...

McDonald's (MCD) won't open unless it's sure there's the right amount of foot traffic to keep its cash registers ringing. Neither will Apple (AAPL), Starbucks (SBUX), Nike (NKE), or any other well-established retailer.

So, when malls are opening up left and right – especially when they're the size of several football fields – it's usually a good sign that people are becoming wealthier.

Real estate firm CBRE estimates that since 2016, close to 80% of all shopping malls under construction has taken place in the Asia Pacific region. They cover a combined area that's the equivalent of 100 American Dreams.

And it's not just the malls themselves...

Whenever a new mall opens up, land values around it usually skyrocket. This results in a boost in the wealth of individuals fortunate enough – or smart enough – to own real estate in the area.

Yes, the COVID-19 pandemic has hit Asia's entire retail industry hard, with shopping malls among the worst affected. But this is only temporary.

Meanwhile, growing wealth in Asia has convinced mall operators to pour billions into construction... And it's an undeniable long-term trend.

It's the same explosion in middle-class wealth that unleashed the great shopping center boom in the U.S. in the 1950s.

Back then, 4,500 malls opened in just the four years leading up to 1960. That's a thousand new malls a year. It accelerated sharply after that.

Along the way, we witnessed the birth of today's multibillion-dollar retail giants, like the ones I mentioned above. One of them, Apple, is already worth around $2 trillion.

Smart investors can use this simple indicator of growing wealth to spot the next birthplace of tomorrow's success stories.

As you probably know by now, that birthplace is Asia.

P.S. I've built my career on finding often-missed companies in my part of the world... Asia. That's why Steve hired me. And it's why he has put me at the helm of his True Wealth Opportunities: China newsletter. But recently, I've gotten excited about more than just China. There's an opportunity out there that's even bigger... one that I detailed in a recent presentation. You can check it out for free right here.

"You might not realize it, but China's success is a direct result of its growing middle class," Brian says. That doesn't mean it's too late to capitalize on major economic growth, though. Asia has multiple emerging markets just starting their middle-class booms... Read more here: The Perks of Going 'Back to the Future.'

"Home country bias" can be the cause of major missed opportunities. Keeping your money locked up only in U.S. stocks could be a big mistake. And this major index proves that it pays to diversify into other countries... Get the full story here: Who Loses When the U.S. Drops China Investments?

The coronavirus has caused a shift in how people spend their time. Now, folks are focusing on getting outside and pursuing fitness on their own. That’s driving sales of athletic apparel, shoes, and other products. And it’s providing a boost for today’s company…

Dick’s Sporting Goods (DKS) is a $5 billion one-stop-shop for sporting goods. And its products have been in high demand because of coronavirus lockdowns, even as its stores were closed. In the company’s second quarter, online sales surged an incredible 194%. This helped drive overall net sales growth of 20.1% to $2.7 billion during that period. Dick’s CEO Ed Stack said the company was in a “great lane” to take advantage of the new focus on getting outside.

As you can see in today’s chart, DKS shares have soared off their March lows. The stock has more than tripled over that time frame, and it recently hit a fresh multiyear high. As long as people spend time and money on their favorite outdoor activities, this stock should continue higher… 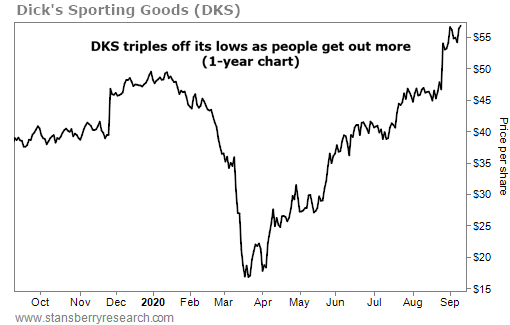