Who Loses When the U.S. Drops China Investments?
By Brian Tycangco
Tuesday, May 19, 2020

We're seeing a lot of anger directed at China lately... And it's beginning to change the way people invest.

But it's not necessarily changing it for the better.

This comes after the Trump administration urged it not to invest in Chinese companies that could potentially be seen as threats to national security. The White House also argued that these companies could pose risks to investors.

Whether or not you agree with the politics behind the move, there's one clear loser from this new policy... And it isn't China.

The FRTIB administers the Thrift Savings Plan ("TSP"), which is basically the government's version of a 401(k) retirement plan. And it holds a huge amount of money.

In fact, the TSP manages nearly $600 billion in retirement savings for 6 million government employees. These funds are invested mostly in U.S. assets, including stocks and government bonds.

But one of the TSP's investment funds – the I Fund – allocates part of the pool to a broad selection of international stocks. It does this based on the MSCI EAFE Index, which tracks developed markets.

It's a practical way to diversify its holdings. It's never a good idea to put all your eggs in one basket.

Now, the I Fund was scheduled to shift its tracked index to the MSCI ACWI Ex-U.S. Investable Market Index this year.

The shift would have allowed the I Fund to access a broader market that doesn't only cover developed markets, but also the world's faster-growing developing markets.

Since the start of 2018, the I Fund and the MSCI ACWI Ex-U.S. Index have generated similar annual returns. Take a look...

What this tells us is that the shift in the tracked index would not skew nor alter the I Fund's expected returns one way or the other. But it does give it better diversification, which is a key goal for an international fund.

China has seen its share of global and emerging market indexes grow over the past few years...

As longtime readers know, that's largely thanks to global index provider MSCI adding Chinese "A-shares" – which trade locally in China – to its benchmark indexes. It's a huge story that could send more than $1 trillion flowing into Chinese stocks in the years to come.

As a result, the MSCI ACWI Ex-U.S. Index has nearly 10% of its holdings in Chinese stocks. That's the second-largest next to Japan (at 18%).

Here's where things start to get worrisome...

By announcing that it will hold off on investing in Chinese stocks, the FRTIB is risking the potential future returns of the TSP's I Fund.

Why? Because Chinese stocks have been the best-performing group of stocks globally so far this year. Just look at the table below...

While the U.S. is down double digits in 2020, Chinese stocks have held up incredibly well... And they've performed far better than the MSCI ACWI Ex-U.S. Index.

China makes up 10% of the MSCI ACWI Ex-U.S. Index. That means the I Fund will need to either reallocate that 10% to the remaining 90% of the stocks in the index – and cut out its best participants – or find a new global index to track altogether.

It's like going to a horse race where you're not allowed to bet on the top horse... which recently beat its closest competitor by a full body length. So you end up betting evenly on the other horses, hoping the favorite has an off day. It doesn't make sense.

Here's the thing I've learned about money... It likes to flow to where it's treated best.

This year, China is treating money best when it comes to the stock market. That's why, outside of the U.S. government's pension funds, money will continue to flow into Chinese stocks.

And that means as a result of this change, U.S. pension funds will lose out... not China.

"Get this... You can buy a basket of Chinese stocks for just 84 cents on the dollar," Chris Igou writes. That's a rare discount – and investors could make big gains as the gap closes. Read the full story here.

"The money moving into Chinese stocks is a tailwind that will outlast any short-term fears," Steve says. The world is still investing in China. And you can't afford to miss out as that trend unfolds... Learn more here.

With many people still stuck at home under coronavirus lockdowns – and most restaurants closed or offering limited service – home cooking is making a comeback. Grocery stores and consumer-staples brands have seen surges in sales. Today’s company is no different…

McCormick (MKC) is a $20 billion-plus spice and seasoning giant. It owns popular brands like Old Bay (seasoning), Frank’s RedHot (hot sauce), and French’s (mustard), and more. And it has seen strong demand as people cook more often. CEO Lawrence Kurzius recently said that sales of the company’s taco-making kits have more than doubled as a result of the pandemic. And Kurzius expects this overall trend to continue “for quite some time.”

As you can see in today’s chart, McCormick’s shares have surged to new highs. The stock is up roughly 70% over the past two years, and it just hit a fresh all-time high. As people continue to cook from home, McCormick’s spices will remain in high demand… 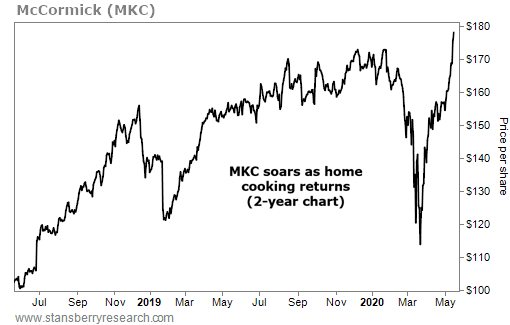