A Reversal Is Due in This Beaten-Down Sector
By Chris Igou
Tuesday, August 20, 2019

This year has been a roller coaster ride – especially for one corner of the global stock market.

Emerging markets were up 11% for the first half of 2019. Then the bottom fell out.

Economic unrest and trade war escalations spooked investors. They sold first and asked questions later. And the panic drove prices down too far, too fast.

Emerging markets have erased most of the gains they built up in the first half of the year. They fell 10% in a single month. But the major fall is creating an opportunity.

This sector just hit its worst oversold level in four years. History says the overreaction is setting up a short-term buying opportunity... And a 16% gain is possible over the next year.

The broad term "emerging markets" includes a good chunk of the world. Markets like China, South Korea, India, and Brazil are all in this category... along with many more.

That's what's happened recently. After a great first half of 2019, emerging market stocks had a major reversal that wiped out nearly all their gains for the year.

The good news is, the recent fall is most likely an overreaction.

The best way to see it is through the relative strength index ("RSI"). This is a simple tool that makes it easy to see when investors have gotten ahead of themselves. And it's a great contrarian indicator.

For example, when a stock falls below an RSI of 30, triggering oversold territory, a short-term rally is likely. And what's happening today is an even stronger overreaction...

Recently, emerging market stocks fell below an RSI level of 25. It was their lowest RSI level since 2015. And it's an occurrence we need to pay close attention to today. Check it out...

This chart shows the sharp drop for emerging markets in July. And it shows today's oversold level... the worst since 2015.

Don't let this scare you, though. This situation is setting up a major opportunity.

Since 2003, whenever emerging markets fell below and jumped back above an RSI level of 25, it led to significant outperformance over the next year. Take a look...

For nearly two decades, emerging markets have performed well... returning almost 8% a year. But buying after a panic like today's could double that return...

Similar instances have led to 6% gains in three months, 11% gains in six months, and a solid 17% return over the next year. That's impressive compared to what you get with a typical buy-and-hold strategy.

Even better, emerging market stocks have bounced back out of oversold territory, showing that a rally is likely. But the downtrend is still in place. So you need to be patient before putting money to work.

Once prices begin to rise, you can easily capitalize on this idea through a simple fund like the iShares MSCI Emerging Markets Fund (EEM). This fund holds a broad basket of emerging market stocks.

It's the easiest way to take advantage of the setup we have right now. But again, make sure to wait for the uptrend before buying.

"This is the biggest news that no one's paying attention to right now," Steve says. "It's the last chance to buy one of the world's best businesses at a major discount." Get the details on one of his favorite investments in an overlooked market right here.

"I may have been the first person to really pound the table about the huge upside potential here," Steve writes. Regular readers know he has been bullish on China for years... And a recent event could just be the beginning of a massive opportunity ahead for investors. Learn more here.

Today, we’re checking in on one of the top “basics” businesses…

Longtime readers know we’re always on the lookout for businesses that sell everyday essentials – the goods we all run out of on a regular basis. Companies like soda giant Coca-Cola (KO) and consumer-goods behemoth Procter & Gamble (PG) have had success with this business model. Today’s company is no different…

We’re talking about General Mills (GIS). The $33 billion company boasts well-known brands like Cheerios (cereal), Yoplait (yogurt), and Häagen-Dazs (ice cream). You probably have some of these brands in your home right now… And consumers will keep buying General Mills products for years to come. In the company’s 2019 fiscal year, it reported sales of $16.9 billion, up 7% from the year before.

Stansberry Research founder Porter Stansberry recommended the stock to his Stansberry’s Investment Advisory subscribers in June 2018. Readers who followed his advice are sitting on roughly 36% returns in a little over a year… more than five times the S&P 500. Congratulations to Porter and his team on another great call! 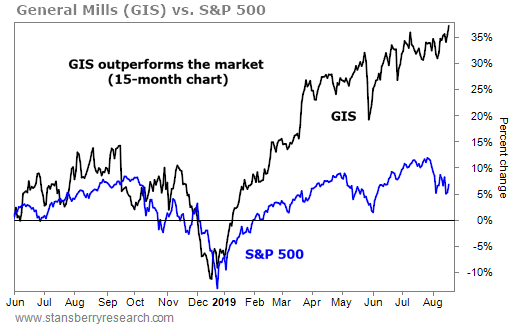