Gold Is Headed for New All-Time Highs
By Chris Igou
Monday, May 4, 2020

It has been one of the best-performing assets of 2020. But don't worry – things are just starting to heat up for this precious metal.

You see, gold has hit a multiyear high in recent weeks. It's now trading near its highest level since 2012. And the rally isn't over yet.

Thanks to the recent breakout, gold could rally double digits over the next 12 months. That would be enough to push it to an all-time high.

Buying after an asset has rallied goes against everything your gut tells you. After all, we know we want to "buy low and sell high," right?

That's true. But putting that strategy to work in investing is tough. How "low" is low enough to buy? This is where things get difficult. The adage is easy to say but hard to implement.

Assets can always fall further than you can imagine. Essentially, a cheap price can always get cheaper. So figuring out where "low" is can be difficult... and dangerous.

The good news is, you don't have to guess when "low" is low enough.

That's because decades of data show that buying an asset in an uptrend often leads to big outperformance. So instead of trying to time the bottom, you can simply buy when prices are moving higher.

This is a "buy high and sell higher" strategy. It works because things that are going up tend to keep going up. And that makes your decision a lot simpler.

In the case of gold, the metal is definitely going up. And again, it recently hit a multiyear high along the way. Check it out... 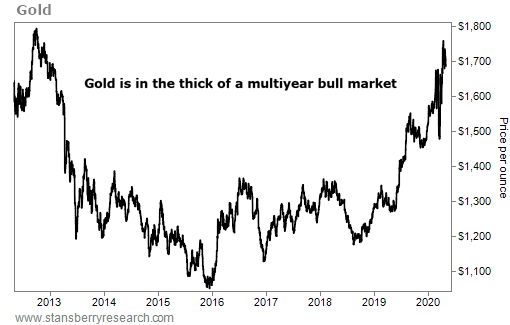 Gold prices have been on a tear since bottoming in 2018. The metal is up double digits so far this year.

As you can see, gold is now trading at its highest level since 2012. And the trend is firmly in our favor.

Your gut is likely telling you that you've missed it... that the upside in gold is behind us. But you can't always trust your gut in the investing world. History says the opposite is true for gold right now.

Since 1973, breakouts like the one we're seeing today have led to more outperformance over the next year. Take a look...

Gold's run since 1973 has been impressive. It has returned 6% a year for more than four decades. But buying after breakouts like we're seeing today has yielded even better returns...

Similar new highs have led to 5% returns in six months and an impressive 12% gain over the next year. That's almost twice the return of a typical buy-and-hold strategy. And this proves that being bullish on gold is the right move today.

These numbers have another big implication too. If gold rallies 12% from its recent high, that will put the metal at a new all-time high.

That'll likely scare a new batch of folks. They'll think they've missed it. But if it happens, it'll only mean the trend is stronger, and that more gains are likely.

Either way, the trend in gold is up right now. And history says you should be a part of it.

P.S. Our colleague John Doody says gold could do even better over the long term. The metal more than doubled in the years after the 2008 financial crisis... And this time around, he believes it could ultimately soar above $3,000 an ounce. If you want to learn more – including how to profit with much greater upside than buying physical gold – check out a replay of John's recent online talk right here.

Even cash can lose value. In times of volatility, it's a good idea to have a portion of your portfolio allocated to safe-haven assets... especially when they're setting up for a rally... Read more here: Why Gold Is Set to Soar Above $3,000 per Ounce.

"This is Economics 101 – when there's more demand and less supply, prices go up," Steve writes. As people clamber into safer assets, we're seeing a "perfect storm" for higher prices in one investment... Get the full story here: "There Is No Gold..."