I (Drew McConnell) sat in shock...

Did he really just say that?

I looked to my wife, rolled back the footage, and said, "Listen to this."

Right now, he's one of five Fed presidents who serve as voting members of the Federal Open Market Committee ("FOMC")... So he's tuned in to what the Fed is thinking and planning.

Early in the interview, Kashkari was asked, "Is the Fed just going to print money?" He responded...

That's literally what Congress has told us to do. That's the authority that they have given us.

That alone is an incredible statement. But later, Kashkari was asked if people should be concerned about their cash in the bank. He responded (our emphasis added)...

There's an infinite amount of cash at the Federal Reserve. We will do whatever we need to make sure that there's enough cash in the banking system.

That was it. I had to rewind the show. I had to make sure I heard him correctly. Sure enough, those were the exact words from a leader at the Federal Reserve.

The Fed's playbook is on the table. The people in power are all saying, "We need stimulus! Fire up the printing presses!" So that's what the Fed will do.

We have no doubt they'll use that power to create more new cash than most folks can imagine. And as we'll explain today, this is an absolutely massive tailwind for gold...

To help stabilize the economy during this coronavirus crisis, some folks expect the Fed will print a total of more than $10 trillion. Whatever the number is in the end, it will be a lot. And we already know at least one of the outcomes.

Printing new money devalues the dollars that are currently in circulation. At some point, it's almost guaranteed to cause inflation. The prices for just about everything will go up.

But that's the last thing on our leaders' minds right now. With the U.S. economy basically at a standstill, they're far more worried about deflation – or prices dropping – due to lack of demand.

The thing is, the longer it takes for the economy to get back into gear, the more money the Fed will print. It has already told us it won't stop.

We can already see the magnitude of the Fed's actions in the following chart. Each week, the Federal Reserve Bank of St. Louis publishes the total amount of assets on the Fed's balance sheet. It includes U.S. Treasurys, U.S. dollars, foreign currencies, mortgage-backed securities, and even gold.

Since mid-March, the Fed's total assets have jumped by more than $2 trillion, or roughly 55%... 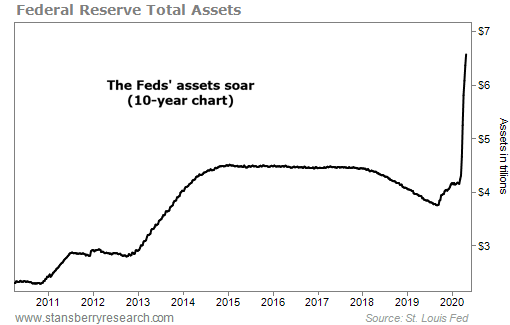 Clearly, the Fed is going to do whatever it takes to ease the effects of the current crisis.

That's why, when I saw this interview, it became clear... Precious metals are a steal at today's prices.

Again, printing trillions of new dollars makes our existing dollars worth less. And they will be worth less relative to hard assets, like gold and silver.

These assets (probably) won't go up in a straight line. But precious metals' prices will rise, a lot.

We've recommended buying physical gold (coins or bars) dozens of times in past months and years. And that's still our preference, when you can buy it at a reasonable premium over the spot price (ideally, less than 6%). But because demand for physical precious metals has skyrocketed in recent weeks, that may be tough.

One of the simplest ways to buy gold in your brokerage account is with the SPDR Gold Shares Fund (GLD). The fund buys and stores physical gold in secured vaults.

As of yesterday's market close, GLD held about 34 million ounces of gold. If you multiply that by the price of gold (about $1,685) and divide that by the number of GLD shares (361 million), you get $158.70, the approximate price per share of GLD.

In other words, when you buy GLD, your investment is backed by physical gold.

But with the aggressive monetary policy from the Fed and the government stimulus package, it has snapped back. On Thursday last week, it hit a new multiyear high of $163.34... 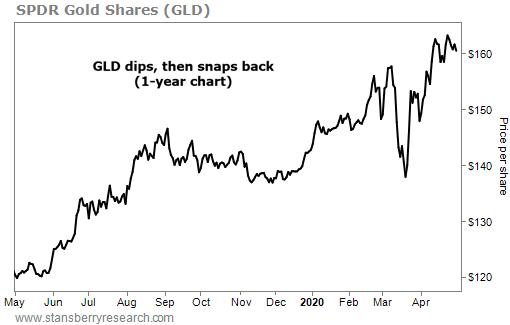 The pieces are in place for a massive rally in gold. And the price action is bullish.

On the upside, we expect gold prices to double or more over the next few years. Yesterday, gold closed at around $1,685 per ounce. So a 100% increase would put gold at more than $3,300 per ounce.

That may sound like a crazy prediction today. It's more than $1,000 per ounce higher than gold's current all-time high of $1,900. But it is possible. Even if it doesn't happen in the next few years, 100% gains in gold are all but inevitable over time...

The Fed told us it will do whatever it takes to support the financial system. And we have no reason to doubt it. That means it will print trillions of dollars.

After all, how else will the U.S. government come up with so much money...

The White House and Senate have agreed to a massive $2 trillion stimulus package. Among other things, it's been delivering direct, $1,200 cash payments to lower- and middle-income Americans.

The Fed and the U.S. government will aggressively stimulate the economy to aid the fallout of the coronavirus. That means they'll print money. They'll buy U.S. Treasurys, corporate bonds, and potentially even U.S. stocks in the future.

All that will lead to much higher prices for precious metals. For gold, $3,000 an ounce isn't a longshot... It's likely. And buying shares of GLD is a great one-click way to profit.

Editor's note: If you want to learn more about why gold could soar past $3,000 an ounce, we recently aired a videoconference with legendary gold stock investor John Doody. His gold research has produced 923% gains since 2001 – so it's no surprise that the top minds in the business read his work. Now, he's going public with his outlook for the gold and silver markets... and the secret to finding the highest-quality gold stocks. Watch the video right here.

"With fear running rampant in the markets today, the price of gold could ultimately soar to $3,000 per ounce or more," John Doody writes. And that means there is no better time than right now to own the best names in gold stocks... Read more here: Why This Bull Market Isn't Stopping Anytime Soon.

During the height of the Great Depression, America saw several trends that we're seeing again today – most notably, rock-bottom interest rates. And with the Fed prepared to print an endless amount of money, there are big implications for your portfolio... Learn more here: The Fed Has a "Blank Check"... And It's Not Afraid to Use It.

Today’s chart shows a company that benefits from social distancing…

Amid the coronavirus outbreak, folks are being asked to keep their distance whenever possible. But essential businesses are expected to keep running smoothly nonetheless… particularly in the life sciences, where a slowdown in drug development or distribution could have fatal consequences. Today’s company supports those efforts, even from a distance…

Veeva Systems (VEEV) is a $30 billion software company whose customers include the world’s leading pharmaceutical companies. It provides specialized services tailored for the industry – and since they’re hosted on the cloud, customers can use them from anywhere. A new Veeva feature is perfect for today’s social-distancing rules: It authenticates doctors’ electronic requests for product samples, so they don’t have to meet with sales representatives in person.

VEEV shares have exploded roughly 600% over the past four years. And as you can see, they just hit new all-time highs. Veeva provides a valuable service even in normal times, and customers need it now more than ever… 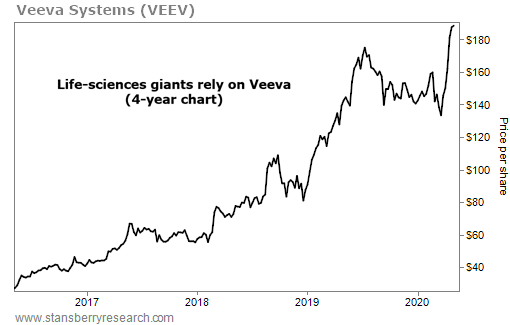