Here's Why We Can Expect Further Turmoil in the Oil Markets
By C. Scott Garliss
Thursday, April 23, 2020

The oil markets are being whipsawed once more...

On Monday, the price of West Texas Intermediate ("WTI") futures imploded. They went negative for the first time ever.

The problem is that domestic storage capacity is disappearing. Demand for fuel products has crumbled as the world remains in lockdown... So everyone in the oil markets is looking for places to store the commodity. They're hoping they can sell it later at higher prices.

No one wants to be stuck taking physical delivery of oil without a place to store it. As a result, financial traders and speculators who owned oil futures with May delivery were desperate to get out ahead of expiration.

They were willing to sell at any price... even if that meant paying someone to take it off their hands. And so, prices went negative, going as low as negative $40.32.

The crazy part is that this isn't the only force at work. It turns out that a misunderstanding of exchange-traded funds (ETFs) is also to blame.

The crazy story behind what's going on is all about oil-related ETFs. Given the dire economic news and the consequent plunge in oil prices, it seems many investors have decided now is the time to buy oil.

The United States Oil Fund (USO) saw record daily inflows of $552 million on April 17... and record weekly inflows of $1.6 billion for the week of April 13.

Overall, oil-related ETFs have seen their net positions rise from $204.5 million at the beginning of April to $6.3 billion now. That's an increase of 30 times in just a few weeks. You can see it in the chart below... 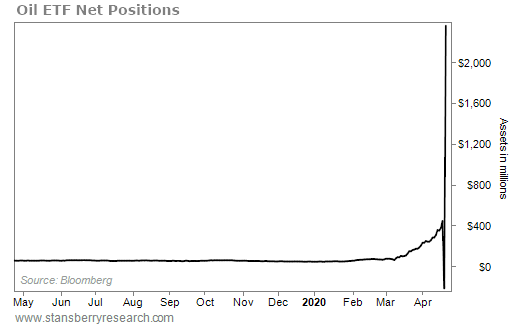 The odd negative number is a result of the wonkiness that happened on Monday. And interestingly, that wonkiness was a result of these massive inflows. They created a different problem. It has to do with how the funds operate...

Typically, when the economy is doing well and demand is strong, oil contracts trade in something called "backwardation." That means oil for June delivery is more expensive than oil for July delivery.

But now, because of weak near-term demand, we're in what is known as "contango." That's when oil for June delivery is cheaper than July delivery.

The problem with oil ETFs is that they use futures to track the oil price. And they're built more for stable oil markets.

Around expiration, they short the oil contract for the month with the nearest expiration date (or "front month") and buy the next month's contract. That may work in smoother markets... but not so much in times like today.

Whenever you sell short, your goal is to "sell high and buy low." So if the funds are shorting at a lower price and covering at a higher price, they're losing money. Anyone that buys and holds these contracts is suffering. That leads to the real issue...

All the new ETF demand flooded the futures market. Because it's so close to expiration, traders are shorting the front-month contract and buying next month's contract. On top of that, you have those looking to genuinely get out of their commitment to accept delivery of physical oil... resulting in even more selling.

This caused the prices in oil markets to crash. This situation could quickly rectify itself though...

The oil fund I mentioned earlier, USO, said it is halting the creation of all new shares. It's waiting for Securities and Exchange Commission approval to register an additional 4 billion shares. Until that happens, it won't be creating any more.

This means regulators are more in tune with what's happening. They've realized the selling pressure these new inflows are creating, and they're trying to stem the tide.

In the short term, this could place some additional pressure on the price of oil. The largest buyer of next month's contract is unable to buy at the moment. But things will go back to normal.

In the meantime, the media is hyping the negativity of the situation. They're saying it's because growth has been destroyed. They'd have you believe the economy is never coming back.

I'm not suggesting anyone should run out and buy oil. It's going to take some time for this situation to unwind. And the commodity is going to experience more selling pressure before the outlook improves. But it will improve eventually.

When the hype is this big and the media is in a panic, it's usually a sign of a bottom... Speculators are being wiped out. And that must happen before we move forward.

We will see more turmoil from here. So expect a bumpy road for oil in the coming weeks. But know that this kind of shakeout is all part of the bottoming process for the economy and the markets.

While the current situation in oil is still grim, the price of oil won't stay negative forever. Unfortunately, oil and gas producers are still directly impacted by the price of their product. And that means we expect more pain ahead in this sector... Read more here: Oil Crashes... Don't Make This Foolish Mistake.

When markets fall, they can easily "snowball" and pick up downward momentum. These three tips can help you avoid a "forced sale" and protect your money in the event of a major downtrend... Get the full story here: How to Withstand the "Forced Sale" Snowball.

To contain the coronavirus outbreak, “nonessential” businesses around the world have closed down. That includes most small retailers, like clothing boutiques and independent bookshops. In response to the shutdowns, businesses and customers have turned to the Internet. That’s where this company comes in…

Shopify (SHOP) is a $70 billion e-commerce platform that serves more than 1 million merchants. It provides the software that businesses need to sell their products online in exchange for a monthly fee and a cut of the store’s revenues. With so many businesses abruptly pushed online-only, Shopify CEO Jean-Michel Lemieux said last week that the company is seeing thousands of new customers and “Black Friday level traffic every day.”

SHOP shares have soared about 170% over the past year and recently hit a new all-time high. The world’s shopping was moving online long before the coronavirus, but the outbreak has accelerated this trend… 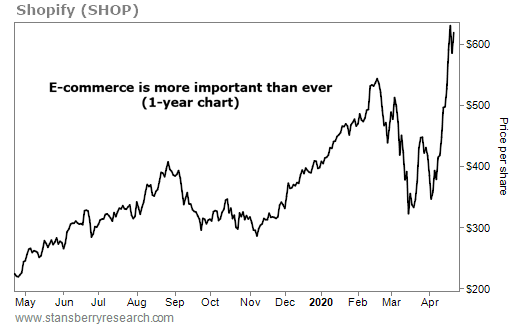