Bank balance sheets are about to get an influx of cash...

And it's all at the expense of everyday Americans.

If that sounds unfair, take it up with the Federal Reserve. Because its rate-hike plan isn't just hurting asset prices – it's also costing anyone looking to buy a home.

Still, like it or not, there's a winner in this situation... the banking sector. Today, banks are riding a tailwind that could last for years. And that means they should be big winners from here.

Over the past year, the central bank has been dead set on bringing inflation growth back down. To do so, it has increased interest rates by 3%. And it has sent mortgage rates higher in the process.

By the middle of 2021, as the Fed began talking about tightening monetary policy, the interest rate on a home loan was right around 3%. By the start of 2022, it was up to 3.5%. And now, with the 3% increase we've seen in the federal-funds rate so far, the current rate on a conventional mortgage is right around 6.9%.

This is painful for anyone trying to buy a house. But it means a lot of interest income for banks.

Given those numbers, here's what the loan payments and total interest look like... 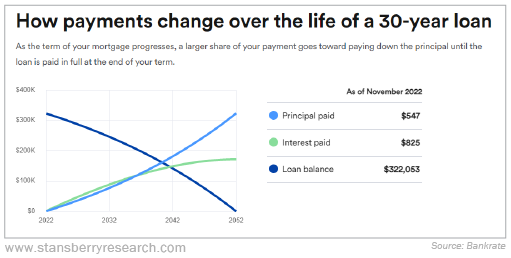 Fast-forward to today and things have changed. The typical home price is up 40%, to about $451,000. And as of last Wednesday, mortgage rates have more than doubled, to 6.9%.

That's a double whammy for housing affordability. You can see it in the updated payment numbers... 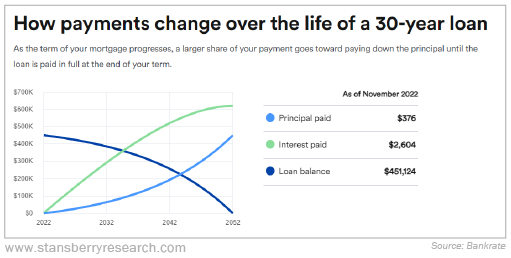 From the second quarter of 2021 to the third quarter this year, the total interest paid on the median home-sale price jumped from $183,349 to $621,163. Over the lifetime of the loan, that's a return-on-investment increase of 90%.

This is a terrible deal for buyers, no doubt. Housing is dramatically less affordable than it was just two years ago. But as investors, it's creating an opportunity...

In other words, because the total amount of interest on loans has increased, it takes longer to pay that portion down. Much more of homeowners' early mortgage payments are going right to the banks' profits.

That's important because several years from now, rates are going to drop once more. When that happens, we'll see a refinancing wave, and the process will start over at a lower rate. So even after rates fall, banks will receive a new wave of margin-only payments for a few more years.

This will then improve the balance sheets of regional lenders. Even if they make fewer loans, they should be much more profitable and take in more money. At the same time, they shouldn't have to attract as many deposits that will require higher rates of interest.

It's a lasting win-win scenario.

If you're interested in this trend, take a look at the Invesco KBW Bank Fund (KBWB). This exchange-traded fund holds a basket of large domestic banks as well as regional lenders.

By buying a basket of bank stocks, you minimize the risk of choosing one company and betting on the wrong horse. So check it out... It's a broad-based way to gain exposure to rising profits in the sector.

Editor's note: Have you gotten your livestream ticket yet for this week's Stansberry Research conference? It's our 20th annual event, and it's shaping up to be an incredible time... filled with recommendations from some of the brightest minds in the finance industry. Steve and Brett are both presenting – plus, you'll hear from Scott, Dan Ferris, and our entire lineup of expert guest speakers.

Click here now to secure your livestream access ticket and watch the whole thing from your living room.

Despite soaring mortgage rates, you shouldn't expect a repeat of the 2008 housing bust. In this article, Brett Eversole takes a look at U.S. mortgage holders – and he shares why they're in much better shape than you might think... Read more here.

"The Fed has already raised rates higher, faster than during any recent interest-rate cycle," Corey McLaughlin writes. When will it stop pumping the brakes? Scott and the Stansberry NewsWire team have broken out a potential timeline... Get the details here.