How Bitcoin Will Survive the U.S. Government
By Eric Wade
Friday, November 22, 2019

Steve's note: Everyone wants to know what the future holds for bitcoin. I'm no expert – that's where my colleague Eric Wade comes in. Together with Fred Marion, he covers everything you need to know about this groundbreaking new technology in his Crypto Capital newsletter. Today, they discuss why the government won't stop bitcoin from spreading...

He forbade Americans from holding collectible or monetary gold. You could still hold jewelry, but you couldn't hold it as an investment property or as something that you wanted to exchange for value.

FDR had several reasons for doing this. But one of the biggest was that the government decided Americans were keeping the economy from growing by hoarding gold... locking it away in a safe and not touching it or spending it.

Could something like that ever happen with bitcoin? Anything is possible. But in short, we don't believe investors should fear a U.S. ban on bitcoin.

Today, we'll walk you through three key reasons why... and show you why bitcoin is strong enough to survive almost any government threat.

First, the U.S. needs bitcoin to keep up with the rest of the world...

Bitcoin competes directly with the U.S. dollar. So at first, you might think the government would oppose it.

This is partly true. The government does have a vested interest in protecting its control over the money supply. But bitcoin won't be a threat to the dollar unless it's adopted globally.

Of course, we expect that to happen eventually. However, if bitcoin does reach global adoption, a ban would stifle innovation in the U.S. and put it at a competitive disadvantage.

Importantly, we don't believe bitcoin will completely replace fiat currencies like the dollar. We expect dozens – or even hundreds – of currencies to coexist in the future. Imagine a world that distinguishes between government money (like the dollar), corporate money (like Facebook's libra), and "money of the people" (like bitcoin). And each currency would be instantly swappable for any other currency at market rates.

If we're right, this trend is coming. It can't be stopped. Money connects us on a global level... So as the world embraces bitcoin, the U.S. will, too.

Second, the government likes currencies it can track...

Every transaction is recorded in the blockchain. That means bitcoin leaves a trail, unlike cash... which also means researchers, governments, and economists can now get deeper insights into money flows than at any other time in history.

That brings us to our last point. The government already had its chance to ban bitcoin...

U.S. government agencies have been tracking (and regulating) bitcoin-related activities for years. This has been going on since at least 2011, with the launch of Silk Road.

Silk Road was an anonymous online marketplace – and a magnet for criminal activity. It was created to be a "freewheeling, free market site" where users could buy anything with bitcoin... including weapons, drugs, fake passports, and more.

The FBI shut it all down in 2013. That scandal alone could have killed bitcoin in the U.S... But it didn't.

More important, this example shows that the government has been policing bitcoin for nearly a decade. If it wanted to ban bitcoin, it would have done so when the crypto market was smaller. Today, it has much more incentive to regulate, legitimize, and benefit from bitcoin and other cryptocurrencies.

We don't believe investors should worry. This isn't 1933.

But even if the "powers that be" did decide to throw common sense aside, bitcoin is strong enough to survive...

Right now, the U.S. makes up a big chunk of the bitcoin market (though it's difficult to know exactly how much). But the rest of the world is getting on board. That's most apparent in Asia... Japan and South Korea are major bitcoin traders, and China has said it plans to dramatically increase its presence in the blockchain space.

As the competition heats up, any ban in the U.S. would almost certainly be temporary.

In short, bitcoin is part of the global economic system now. It's beyond the control of any one country... And its virtues are only becoming clearer.

Editor's note: Two nights ago, Eric sat down with three-time presidential candidate Dr. Ron Paul to discuss a huge story in the crypto world – one that could soon disrupt some of America's biggest companies and turn the entire financial system on its head. If you missed it, it's not too late to watch a replay... You'll even learn which tiny crypto could outperform gold and the stock market by 50 to 100 times in the coming months. Check out the video here.

"Bitcoin has the operators of our monetary printing presses running scared," Fred writes. Governments the world over are hooked on cheap money. By representing a stable store of value, bitcoin has become the target of a secret war. And it could be the war to end all wars... Read more here.

"This is a perfect example of the wrong way to time the market," Eric says. Trying to time quick swings in the market usually costs you more money than it makes you. And that's true in cryptocurrency, too... Learn more here: The Right Way to Time Crypto in This Irrational Market.

All our most popular electronic devices rely on semiconductors. The Internet age wouldn’t exist without the tiny silicon chips in smartphones, personal computers, and the servers that make up the online data storage “cloud.” Semiconductors bring in big money as folks keep demanding more and more computing power – and that’s great news for today’s company…

Advanced Micro Devices (AMD) is a $45 billion semiconductor developer that sells computer processors and graphics cards, mostly to electronics manufacturers that will install them in their own products. There’s no shortage of demand today, and AMD enjoys a profitable business… It brought in net income of $120 million in the most recent quarter, up 18% year over year.

AMD shares have exploded more than 1,300% over the past five years. And the stock hit a multiyear high earlier this week… although some analysts worry that this rise isn’t sustainable. Regardless, semiconductors have been a goldmine for investors – and this big tech trend isn’t going anywhere… 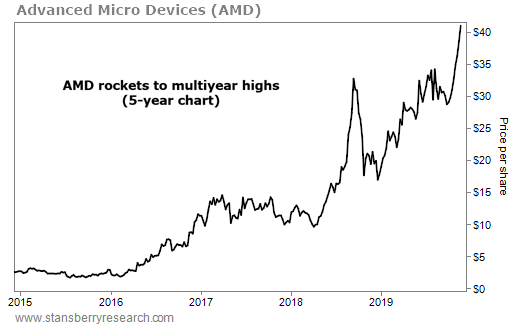