It's hard to admit that you're stupid.

But when one young trader saw a $380,000 loss on a single call option, it taught him a valuable lesson. He wrote an article for Vice in which he called himself stupid 10 times.

This wasn't even a story of complete stupidity...

Sure, this anonymous trader gambled in "meme stocks" like AMC Entertainment (AMC). As they did with many young people, these meme stocks sucked him into the excitement of the pandemic's bull market.

But those are the trades where he made money. He emerged from a series of speculative bets having turned $5,000 into $50,000. He was ready to start playing it safe.

That's a smart instinct. But his execution was terrible – and it turned his bet on a "safe" company into anything but a safe move.

This trader found one good investment thesis. Then, he put everything he had into it: the $50,000 he'd made from his previous trading, plus all the savings he'd built up by working a good job and spending conservatively.

The company he pegged all his wealth to was Alibaba (BABA), the e-commerce giant that's like China's version of Amazon. He did some research. This was a stable, wildly successful blue-chip company... Yet its share price ($245) was down more than 25% from its peak.

The company was still making tons of money, pushing down its price-to-earnings (P/E) ratio. Analysts he found online were confidently calling Alibaba a buy.

He decided to buy Alibaba $200 calls – essentially using options to make a leveraged bet on the company. If he was right and shares turned around, he'd make a fortune. If he was wrong... well, how far could shares of this great company fall?

He put all his available cash into the trade. Alibaba's stock kept falling. He saved more money from his salary, and he put that cash in, too – another $100,000. He couldn't even pay his $900 rent until his next paycheck came in.

This trader's problem wasn't his investment thesis. He was right in thinking that Alibaba is a solid company at a good price.

In hindsight, he realizes his true error...

I should have listened to [my mom]. She told me to diversify a little. Don't go all in on one. But I felt like, because she told me not to do it so many times, I actually had to.

As his situation illustrates, everyone and their mother knows you need to diversify. This isn't an insight. It's a platitude or an empty hand-wave to prove that you talked about the risks in an investment. It's an admonition akin to "eat your vegetables"... acknowledging the wiser action without changing anyone's behavior.

That's partly because diversification is boring and it's more fun to go for the big score.

But it's also because it's difficult to implement...

Proper diversification involves understanding correlations that vary across time between assets with shifting categorizations. This is an area that human minds – even those of accomplished statisticians – can't easily understand.

Do you diversify across stocks and bonds? Growth and value? Cyclical or acyclical? Reopening or work-from-home? Of course, you can diversify by sector, industry, size, and other features as well.

So instead of "eat your vegetables," giving someone advice to diversify is more like telling them to "eat healthy." Sure, I'd like to... But how?

Well, not putting all your liquid net worth into a single option trade is a good start. But the unsexy answer is that you need to keep slogging away and try to understand your investments.

To do that, here's a simple first step: Try thinking about diversification within a framework we think provides better insight today...

Right now, I'd suggest that you want to do two things with your portfolio: participate and protect.

That means you want to participate in the booming economy and the bull market it's fueling, but also protect your wealth from the downturns that may come by holding conservative, value-creating businesses.

The economy is undeniably on fire. Consumers have turned on their spending spigots. Employers are hiring every available candidate they can find.

This economy says you need to stay invested and participate.

But, of course, everyone knows it. High stock prices already reflect the current economic strength.

While the market can keep going higher, when valuations get this high, the risk of a major reset rises. If growth disappoints or sentiment shifts, a 20% or 30% downswing can happen quickly.

With the market this high, you also want some positions that protect you from a correction or even a recession.

The new year is the perfect time to take a hard look at your portfolio. Walk through it, position by position, and ask yourself which of your holdings are designed to participate... and which are designed to protect.

And finally, make sure you aren't in danger of losing it all if one of your "safe" bets goes south.

Editor's note: Americans spent 2021 pouring their cash into wild speculations. We've seen this before – during past "inflationary eras." And it's likely just the beginning of huge distortions in our financial system... even as the Federal Reserve scrambles to get inflation under control. That's why Doc has released four special reports to help you take the steps your portfolio needs over the next few years... Click here to learn more.

"You don't get wealthy by bold predictions or a quirky financial product," Doc says. Instead, being a little bit right every day and stacking up those correct choices over time pays off in the end... Read more here: A 'Magic Ticket' to Wealth... Or to Financial Disaster.

In the investing world, there's no such thing as a "sure thing." Even the best bets can go from life-changing gains to crushing losses. That's why you need to protect your downside with this simple strategy... Get the full story here: The Secret to Taking Profits Instead of a 70%-Plus Loss.

Today, we’re looking at a company that stocks your pantry…

Regular readers know we love investing in companies that “sell the basics.” They may not be exciting, but these businesses sell the products that we use on a day-to-day basis… which helps bring in steady, reliable sales. Today’s company is a perfect example…

Flowers Foods (FLO) is a $5 billion bread maker. It has been around for more than a century and currently owns popular brands like Nature’s Own, Dave’s Killer Bread, and Wonder. And these classics keep people coming back for more, no matter what’s going on in the economy. In the most recent quarter, Flowers Foods sales hit $1 billion… up 3.9% year over year.

As you can see, FLO shares have risen steadily. They’re up more than 20% over the past year and just hit a fresh all-time high. As long as folks keep stocking up their pantries with their favorite packaged breads and pastries, this stock should continue higher… 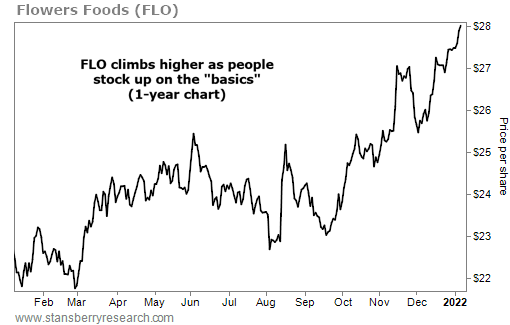