A 'Magic Ticket' to Wealth... Or to Financial Disaster
By Dr. David Eifrig
Wednesday, September 22, 2021

When I got my first job in finance, I was fresh out of business school and ready to take on the world at Goldman Sachs. But I wasn't ready for what the world would throw at me.

One of my earliest days on the trading desk was October 19, 1987... now known as Black Monday.

The Dow Jones Industrial Average dropped 23% in a single day. It's still the worst market day in history. And it led to panic and volatility around the world. At one point, we watched futures on Japan's Nikkei stock index drop below 10,000, only to see them shoot back up to 18,000 moments later.

Investors thought they'd been given a "magic ticket" to wealth – until chaos struck. I'd never seen anything like it...

We spent our days and nights at Goldman that panicked week, trying to keep the world's markets stable... and, of course, make money.

When we had a spare minute, a friend and I would take an occasional stroll through the financial district to clear our heads.

We'd heard stories of suicide jumpers on Wall Street during the Great Depression. One London paper claimed that lower Broadway was clogged with corpses in 1929. We wondered if Black Monday would bring similar atrocities.

It turns out the Depression jumpers were largely myth. The Washington Post published a piece debunking the tall tales later that month.

But the stories were stuck in our heads... And it felt like the craziest time of our lives. Anything seemed possible. So we looked up every block or two, fearful that some stockbroker would fall on us.

When I had arrived on Wall Street back in 1985, I was joining the "Decade of Greed." Business was booming. Stocks kept rising. Just a few months after the crash, Oliver Stone's film Wall Street would detail the excesses of the era, with Michael Douglas' character Gordon Gekko declaring, "Greed, for lack of a better word, is good."

Money was easy to make. And we thought it always would be.

But Black Monday changed me. After enduring the worst the market had to offer, I learned to always understand and account for what could go wrong...

The 1987 crash stemmed from a wrongheaded attempt to capture the upside of stocks without the downside. Wall Street called this "portfolio insurance." The process was simple: Purchase portfolio insurance, and – when markets declined – the portfolio manager would sell futures contracts in an effort to hedge your downside risk.

It took a coordinated effort from the main players in futures trading, Goldman and Salomon Brothers, to put a bid under stocks and end the panic.

The purchasers of portfolio insurance thought they were given a magic ticket to get the upside from staying invested while covering their losses.

I don't blame them. That's Wall Street's modus operandi. They convince you that they know what will happen... But they simply don't. No one really does.

You don't get wealthy by bold predictions or a quirky financial product. You get wealthy by being a little bit right each day and stacking those correct decisions on top of each other over time.

You get wealthy by finding a healthy business that looks undervalued – that you'd like to be a part owner of – and adding it to your portfolio, considering how it will interact with the rest of your investments, and then doing the same thing again and again a few dozen times.

There's no magic ticket to get risk-free returns. So don't be cynical, but always be skeptical...

Don't rely on shortcuts or easy fixes. And always have a plan to cover your downside.

Editor's note: With inflation on the rise, gold in limbo, and real estate and stocks at all-time highs, what's the best way to protect the value of your savings? To answer that question, our firm's greatest bulls and bears – including two of our senior partners – are meeting on September 28 to reveal what could be coming next for the markets... and to share exactly what you should be doing with your money right now. Save your spot for this free online event.

Buying great, mispriced stocks "on sale" is a great way to make a lot of money. But for value investors, it's important to learn one lesson: how to tell the difference between an overlooked gem and a value trap... Get the full story here.

There's no such thing as a "sure thing" in the investing world. Even the best idea can go from massive gains to crushing losses. That's why it pays to protect your downside with this simple strategy... Read more here: The Secret to Taking Profits Instead of a 70%-Plus Loss.

Market Notes
THIS COMPANY IS VITAL TO COVID-19 VACCINE DEVELOPMENT

According to the New York Times, the seven-day average of daily COVID-19 deaths in the U.S. surpassed 2,000 last weekend. That’s a high we haven’t seen since March. And as the Delta variant continues to drive up cases around the world, it’s clear the pandemic is far from over. So today, we’re checking in on a major player in COVID-19 vaccine development…

Repligen (RGEN) is a $20 billion leader in life sciences. When we last highlighted the company, it was helping to purify COVID-19 vaccines. Since then, Repligen has launched its own affinity resin to be used in the purification process… And it’s continuing to put its innovations to good use in this difficult time. COVID-19-related sales made up 27% of Repligen’s revenue in the most recent quarter, while total revenues – including its base business – grew 69% year over year to $163 million.

As you can see, RGEN is up more than 120% over the past year. It also recently hit a fresh all-time high. And as Repligen continues to aid in the fight against COVID-19, we can expect this uptrend to continue… 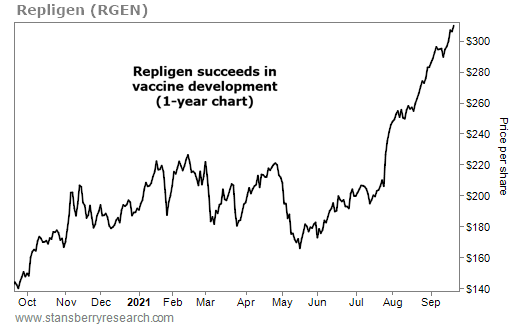