How to Avoid This Critical Investment Mistake
By Steve Sjuggerud
Thursday, October 17, 2019

I'll say something, and you raise your hand if it's true for you.

I'm serious. Don't raise a "mental hand." You need to actually pick your arm up. That's the rule, so play along.

A decent chunk of non-U.S. readers follow my work, but 80% to 90% of those reading just picked up their hands. By and large, DailyWealth readers like you are from the U.S.

Just about everyone is raising their hands now. Even those outside the U.S. tend to own stocks from the world's largest and most important market. And those in the U.S. are undoubtedly invested in their own country. Why wouldn't they be?

Here's where things get tricky, though. This one's just for U.S. folks...

"More than 70% of my stock portfolio is invested in the U.S."

Did you raise your hand? I bet you did. But here's the thing... In a perfect world, no one raises their hand to that question.

Don't feel bad if you did. Most U.S. investors are in the same boat. But you should know, this common mistake is actually a big problem.

Investors have a bad habit of making this critical error, called "home-country bias." It's what causes investors to leave entirely too much of their money wrapped up in the country they're from.

It's normal, of course... If you're from the U.S., then you understand the U.S. You see it and live in it every day.

You don't experience China or Australia or Brazil on a daily basis. You don't understand the markets in those countries. But still, ignoring them with your investment dollars can be a big mistake.

If you're from the U.S. and you're not succumbing to home-country bias, then only half of your portfolio should be in the U.S. But believe me, few folks actually meet that standard.

Just take a look at the chart below. It shows what percent of the global stock market a handful of countries make up, alongside how much a typical person invests in their home market... 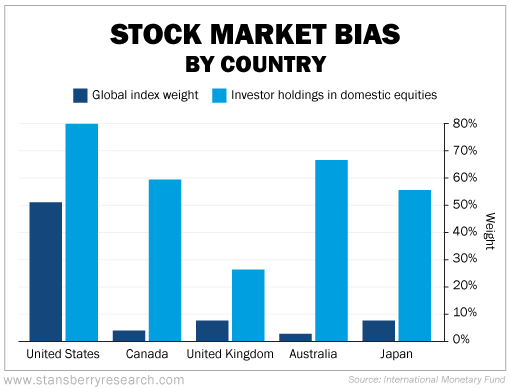 Again, U.S. investors should have around 50% of their stock investments in the U.S. But most folks are closer to 80%. And the problem is likely much worse if you're a foreign investor...

Canadian stocks make up just 3.4% of global market cap. But the typical Canadian has 59% of their investments in Canada. The story is similar in the other countries listed, and likely in most countries around the globe.

Sure, the U.S. has been a major winner over the last decade. So if you live in the U.S., giving in to home-country bias has probably worked out for your portfolio in recent years. But there's no guarantee it will work forever.

That's why I've urged readers to look at investments outside the U.S. Specifically, I've been pounding the table about the opportunity in China.

You don't have to take me up on that idea. But if your entire portfolio is invested in your home country, it's time to diversify some of your investments. If you don't, you could end up paying for your home-country bias.

Chris Igou just spotted a setup in a beaten-down market that most investors wouldn't touch right now. This could lead to a double-digit rally over the next year... Get the details right here.

"Today, investors are throwing in the towel on a major foreign market," Chris writes. "The crazy part is, this part of the world hasn't been losing money... It's been booming." Learn more here: This Market Is a Contrarian's Dream.

Market Notes
TRIPLE-DIGIT GAINS AMID THE 'DEATH OF RETAIL'

Today, we’re looking at a company that’s surviving the “death of retail”…

As regular readers know, many brick-and-mortar stores are unable to compete with the convenience and low prices of e-commerce giants like Amazon (AMZN). Some folks take that too far… proclaiming the end of traditional retail altogether. But some stores have found ways to keep customers coming through the door. Check out today’s example…

RH (RH) is a luxury home-goods chain previously known as Restoration Hardware. It promises “a customer experience that cannot be replicated online” and exclusive products you can’t get from anyone else. Plus, when you’re buying a $459 duvet cover… a $7,295 dining table… or a $22,495 rug, you probably want to see it in person. Sure enough, RH sales topped $700 million in the most recent quarter, up 10% year over year.

Over the past three years – a rough period for many stores – RH shares have surged an astounding 500% to hit new all-time highs. It’s just one more sign that some companies are shrugging off the “death of retail”… 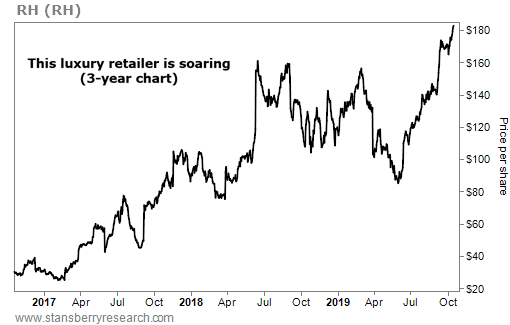