Hong Kong Stocks Could Rally 21% Over the Next Year
By Chris Igou
Tuesday, October 15, 2019

They tend to happen when things are getting worse in the market. So when you see the setup we're seeing today, you typically want to step aside.

On top of that, it's happening in a place most investors wouldn't want to touch right now... Hong Kong.

The protests in Hong Kong have been going on for months. They've turned more violent as time has passed. And it's caused a few major falls in Hong Kong's stock market this year.

Hong Kong stocks recently fell for 10 days in a row. That's a rare situation. Most of the time, it would be bad news... but surprisingly, not in the case of Hong Kong.

History says it could actually lead to a 21% rally over the next year.

Hong Kong stocks have fallen sharply in recent weeks. And after stringing together several down-days, this foreign market is giving us an opportunity to buy.

That's because this is an odd case. Consecutive down-days normally highlight an accelerating trend...

If a stock is rising, then consecutive up-days can mean strong outperformance is ahead. And if a stock is falling, then a run of several down-days generally signals that more losses are coming.

That's how it usually works. But it's NOT how it works in Hong Kong.

To prove it, I looked at more than 20 years of data. And more than 90% of the time, similar situations led to positive returns over the next year.

We'll get to the numbers in a moment. But first, take a look at the recent string of down-days in the chart below... 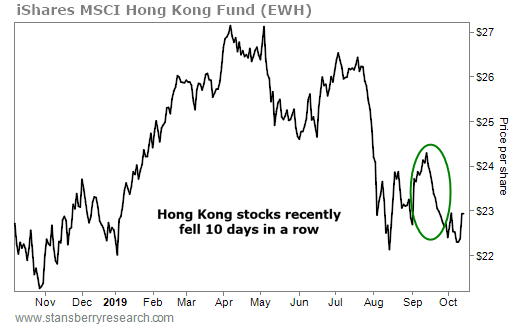 This was a brutal couple of weeks for Hong Kong stocks. They fell every day for nearly two weeks straight at the end of September. And the total decline was a quick 7% loss.

Again, this would normally be a bad sign. But not for Hong Kong stocks. Historically, this type of fall has actually been positive for this market.

More than two decades of data point to real outperformance after instances like this. Take a look...

Hong Kong stocks have barely eked out a positive return since 1996... returning just 1.7% a year. But buying after situations like we just saw has led to incredible outperformance.

Similar instances led to 5% gains in three months, 12% gains in six months, and a massive 21% gain over the next year. Those are solid returns any way you slice it.

Now, I can't recommend you put new money to work in the face of a downtrend. There's no need to try and catch a falling knife.

But when the uptrend returns, history says 21% gains are possible in this beaten-down market. And that means despite the scary headlines, Hong Kong is a market you should be ready to buy soon.

Brian Tycangco has experience with the history of unrest in Hong Kong. He recently discussed the situation with DailyWealth readers... and what it means for investors in the months ahead. Get the details right here.

"Investors should pay close attention as China opens up its markets," Brian writes. "If you don't, you'll risk missing out on outsized, Buffett-like profits." Learn more here: Warren Buffett Would Have Lost This $1 Million Bet on China.

Market Notes
INSIDERS ARE BETTING BIG ON THIS DRAINAGE COMPANY

Lots of folks have opinions about whether a company’s stock will go up. But when those folks are top executives, they often know best if their company’s shares are undervalued… and will sometimes put their personal wealth on the line to profit. Even better, these executives are more likely to act in the best interests of shareholders. Check out this example of a company with the “insider advantage”…

Advanced Drainage Systems (WMS) is a $2.4 billion manufacturer of corrugated plastic pipes. It has products for every setting, from homes to factories to airports. Company director Ross Jones likes this business so much, he owns a roughly $450 million stake… including more than 300,000 shares he bought for more than $10 million in October alone. And he’s never sold a single share.

Over the past year, WMS is up more than 25%… And it just hit a new multiyear high. With Jones along for the ride, shareholders can likely expect more good times ahead… 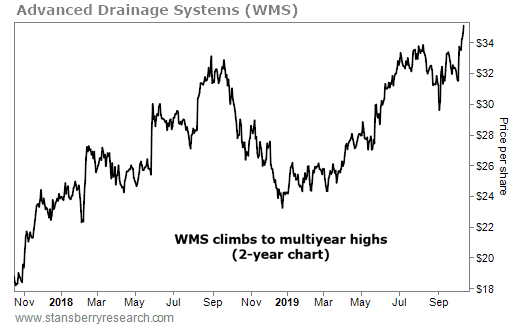