Warren Buffett Would Have Lost This $1 Million Bet on China
By Brian Tycangco
Friday, October 11, 2019

If there's one thing we can all agree on, it's that Warren Buffett – one of the world's most successful investors – is anything but a gambler.

But in 2007, Buffett stunned the investing world when he made a controversial investment. He bet that one kind of investment would outperform a basket of stocks handpicked by a well-known New York money manager.

That wager ended up netting Buffett $2.2 million... It wasn't even a contest.

Over 10 years, Buffett's pick returned a compounded 7.1% per year, while its counterpart managed a mere 2.2%.

The amazing thing is that Buffett's pick wasn't some amazing, high-flying, tech-laden investment strategy. It was, in many ways, the simplest investment anyone could have made.

You see, Buffett bought shares in an index-tracking fund called the Vanguard 500 Index Fund Admiral Shares. It was created to do one thing – track the S&P 500 Index performance as closely as possible.

"The trick is not to pick the right company," Buffett said. "The trick is to essentially buy all the big companies through the S&P 500 and do it consistently."

He was confident his investment would always include 500 of the biggest and most profitable U.S. companies in the market. That gave him a high probability of outperforming most stock pickers, who spend enormous amounts of time and resources trying to beat the market.

But if Buffett had made a similar wager in China, he probably would have lost that bet. Let me explain...

China's main stock index is the Shanghai Composite Index. It tracks the Shanghai Stock Exchange, the largest stock exchange in China and the world's fourth-largest by market cap.

Now, the Shanghai Composite Index includes all of the nearly 1,520 listed companies on the exchange. And any newly listed stock is only included 11 days after its initial public offering ("IPO").

What this means is that the key China stock index used by the world to gauge the health and performance of the stock market – much like the S&P 500 is used for the U.S. – is deeply flawed.

Unlike its U.S. counterpart, it doesn't represent the biggest and most profitable companies in China. It's a "catch all" index that holds thousands of stocks. And it doesn't include the initial pop that can happen in a company's first days of trading.

So it's no surprise that the Shanghai Composite Index has lost more than 1% a year from 2008 to 2018. That's why Buffett would have lost his bet in China.

However, had Buffett invested his money in an exchange-traded fund ("ETF") that tracked the total share prices of all listed U.S. companies instead of the S&P 500, his investment would have returned only 3.2% a year... and less than 50% over the past decade. Take a look... 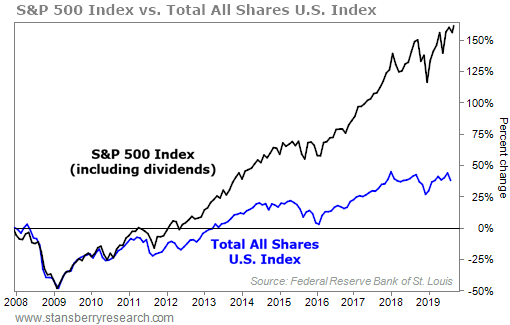 Thankfully, Buffett had the option to invest in a professionally-managed ETF capable of tracking the S&P 500 – which holds the biggest and best U.S. companies – at a low cost.

There are many others just like the Vanguard 500 Index Admiral Shares. And if you have a retirement account, it's likely you own at least one of these types of index-tracking ETFs.

Indeed, according to research by Morningstar, assets in passive domestic stock funds like Buffett's pick now account for the largest share of U.S. investor exposure to equities. A whopping $4.27 trillion, equivalent to about 3.8% of total U.S. household wealth, is now invested in these funds.

But China is just getting started...

Beijing is already opening up its financial sector to allow full foreign ownership in Chinese financial-services companies by 2020. That's just a few months away.

This is huge. It means everyday Chinese investors – most of whom aren't able to invest outside of China – will soon have access to the same quality, professionally managed ETFs that U.S. investors are now using.

Right now, Chinese investors still have few options when it comes to well-managed ETFs with strong track records. But this change allows big names like JPMorgan Chase and Morgan Stanley to get a firmer foothold in China. These big banks are already increasing their investments in Chinese joint ventures.

As this continues, more Chinese investors will want to put their wealth into ETFs. If investment in China ETFs only reaches half the penetration level of the U.S., money flowing into China's domestic stock market would soar nearly 10 times.

This is the clearest road map to huge profits I've seen possible from China's stock market since global index provider MSCI said it was giving Chinese stocks a bigger role in its globally-tracked indexes.

Investors should pay close attention as China opens up its markets. If you don't, you'll risk missing out on outsized, Buffett-like profits...

This summer, Steve told Daily Wealth readers about a massive event in Chinese stocks – and the potential it has for investors in the months and years to come. Learn more right here.

"You can see why it's easy to develop a bias against the world's second-largest economy," Brian writes. "The problem is, bias against China could be costing you a lot of money." Don't miss out on the opportunity in China due to negative stories in the media. Get the details here.

Steve is bullish on housing today. Mortgage rates are near multiyear lows, making this a great time to buy homes – yet housing inventory remains low. That means homebuilders can command higher prices. Plus, they need to build more houses to keep up with demand. One company is thriving in today’s housing market…

D.R. Horton (DHI) is a $19 billion homebuilder. It focuses on the entry-level and move-up home markets, and it does business in 29 states across the U.S. That means its success is a great indicator of how the U.S. housing market is doing… In the third quarter, D.R. Horton reported sales of $4.9 billion, up 11% from the same quarter last year. And the company’s orders climbed 6% to 15,588 homes.

As you can see in today’s chart, DHI shares are grinding higher. The stock is up more than 50% in 2019 alone, and it recently hit a fresh all-time high. As long as the housing market remains solid, homebuilders like D.R. Horton should continue to succeed… 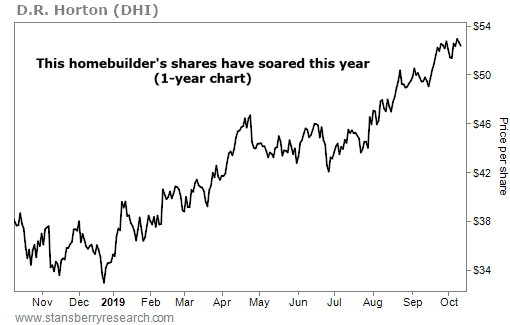