Your Bias Against These Stocks Is Costing You Money
By Brian Tycangco
Friday, July 19, 2019

China and President Trump have something in common...

It seems like 99% of their news coverage in the U.S. is bad.

The problem for China is that unlike Trump, it doesn't have a Twitter account with 62 million followers.

That's partly China's fault... because it bans the use of Twitter. It can't redirect the narrative being strewn on the mainstream media.

And it can't effectively counter Trump's China-bashing tweets, including his most recent...

China's 2nd Quarter growth is the slowest it has been in more than 27 years. The United States Tariffs are having a major effect on companies wanting to leave China for non-tariffed countries. Thousands of companies are leaving. This is why China wants to make a deal with the U.S., and wishes it had not broken the original deal in the first place...

Look, I'm no preacher for all things China. But you can see why it's easy to develop a bias against the world's second-largest economy.

The problem is, bias against China could be costing you a lot of money.

Most folks haven't realized it, but Chinese stocks have nearly kept pace with that stellar return. China's Shanghai Composite Index is up 19.9%.

There's a similar story taking place in these two countries' biggest and most important tech companies... where China's best are nearly keeping pace with the U.S., too.

I'm talking about four of the largest technology-driven Chinese companies – three of which trade publicly in New York.

This includes Alibaba (BABA), Tencent (TCEHY), JD.com (JD), and iQIYI (IQ). They have a combined market capitalization of nearly $1 trillion. And after a rough 2018, they're soaring this year... 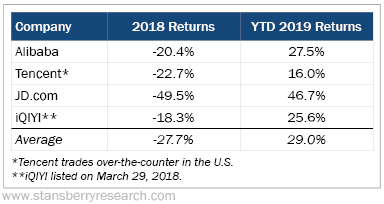 In 2018, the trade war slammed anything and everything that had to do with China. But so far this year, these stocks have performed exceedingly well.

The average year-to-date return for these Chinese tech stocks is 29%. And that nearly matches the returns from the U.S.' most famous tech giants...

Combined, they nearly have a $3.5 trillion market cap. That's about the size of the entire Shenzhen Stock Exchange – the smaller of China's two stock markets.

But while the FAANG stocks wiped the floor with those top Chinese companies last year, 2019 is turning out to be a different story. Look at how the U.S.'s tech leaders have done... 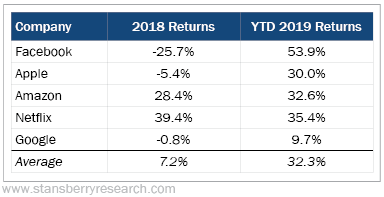 On average, these U.S. tech stocks are up 32.3%. That's impressive. And it just barely beats China's hottest tech companies today.

I don't expect this will last forever, though. Indeed, last week I showed DailyWealth readers how China's stock market has severely underperformed its own booming economy. Chinese stocks need to soar an eye-popping 1,100% from present-day levels just to catch up with China's economy.

That's why I expect a huge catch-up rally over the coming years. And China's big tech names will be an important part of it.

The point is... the U.S. is performing fantastically this year. But if you're only thinking about the U.S., you're missing out.

You wouldn't have known this listening to the news. That's anti-China bias in action. Don't let it fool you into missing out on the big opportunities happening in China right now.

P.S. The craziest part is that mainland Chinese investors haven't even had the chance to invest in most of China's top tech companies. That's changing, though. And it means soon we could see a tidal wave of money flowing into Chinese stocks. My colleague Steve recently put together a presentation detailing exactly what's going on... I urge you to check it out and get the full story right here.

"China is the world's largest car market," Brian says. "And contrary to what you hear in the news, it's just starting to hit its stride." Learn more about how this shift will create more opportunities to profit right here: What You're Not Being Told About the World's Largest Car Market.

China's stock market needs to catch up to its economy. And Brian says we could see a powerful rally ahead... largely thanks to one massive investing story. Read more about this tailwind for Chinese stocks right here.

Today’s chart shows a company that embraced the digital revolution…

The average American now spends six hours online every day. That time includes shopping… keeping up with friends… and catching the latest news. Many older companies struggle to profit in the digital world – especially in the media, as many of us expect news content to be free. Today’s company is different…

The New York Times (NYT) is best known for its 168-year history as a highly respected print newspaper. But the company was quick to charge readers for its online content… And the controversial strategy paid off. Today, its 4.5 million subscribers include 3.6 million who only buy online access. That number jumped by 223,000 in the most recent quarter… And total revenues hit $439 million, up 6% from the same period last year.

As the market realized the Times is no stodgy print newspaper, NYT quickly rose… Shares are up about 170% over the past three years, recently hitting new multiyear highs. By creating a desirable digital experience, even old companies can thrive today… 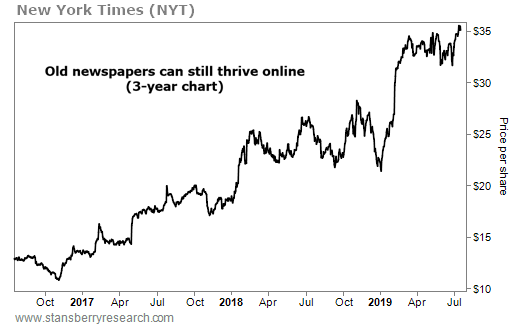