How to Profit From the Dollar's Next Move
By Ben Morris
Friday, October 8, 2021

It's one of the world's most important assets...

It could be on the verge of a major move...

And because of its role in the global economy, this move would tell us a lot about what's likely to come in the markets.

U.S. stocks, foreign stocks, commodities... They're all affected by the U.S. dollar.

So today, we'll look at the recent action in the dollar. We'll show you why it could be about to stage a big rally. And we'll explain what it means for the markets if it does.

A currency acts like the share price of a country. And relative to other currencies, the U.S. dollar has a history of stability. (A lot of people view it as "the cleanest dirty shirt.")

For that reason, countries around the world hold it in their reserves... and often use it to conduct international trade. This makes the U.S. dollar the world's "reserve currency."

International assets like energy and precious metals are often priced in dollars. So when other countries or businesses want to buy these assets – or goods that are made in the U.S. – they need to buy dollars first.

This contributes to weakness and strength, respectively, in large U.S. businesses.

Since 2015, the U.S. Dollar Index – which tracks the price of the U.S. dollar relative to a basket of other major currencies – has often bottomed around 90 and topped out around 100 over the past few years. Said another way, these levels are key "support" and "resistance" for the dollar – important levels at which traders tend to buy (at support) or sell (at resistance).

In the 10-year chart below, you can see that the dollar fell to its support level (and bounced) most recently in January and May. Over the past few months, the dollar has firmed up... It climbed to its 2021 high in August. And it recently broke out to a one-year high... The dollar held strong at its key support level twice recently. And now, it's on the rise. This price action suggests that the dollar could rally back up toward the top of its long-term trading range.

If it does, it will cause a stir in the markets...

If the dollar rally continues, it would be a headwind for commodities. (Remember, as the dollar rises, it takes fewer of them to buy hard assets... which shows up in the market as falling asset prices.) We could see prices fall for everything from precious metals and copper to grains and energy.

For smaller U.S. businesses, international customers usually aren't too important... So a dollar rally is less likely to hurt small-cap stocks (like the ones in the Russell 2000 Index) than large-cap stocks.

For foreign stocks, though, a strong dollar is a supporting tailwind. It makes foreign goods cheaper for U.S. buyers... So foreign businesses will likely benefit from increased exports.

In a "stronger dollar" scenario, it's a good idea to look for trading opportunities in small-cap stocks and in non-U.S. markets.

On the other hand, the dollar's rally could be short-lived. With the dollar now in an uptrend and trading at one-year highs, though, we see this scenario as less likely. If the dollar does turn lower and break its support, we'll likely see a big move higher in commodities. It would also benefit big U.S. businesses (that sell goods internationally) and their stocks.

So a falling dollar would open up great trading opportunities in these areas.

No matter which way the dollar goes, understanding these relationships will help you find the best ways to profit.

Editor's note: Ben and Drew focus on low-risk strategies and opportunities for traders. Recently, they've highlighted a way to profit from rising interest rates... a chance to own a top dividend-payer that the market is ignoring... what to make of a sudden shift in cryptocurrencies... and more. Find out how to access their daily research with a risk-free trial to DailyWealth Trader right here.

"Each day seems like a significant development for the markets," Ben says. And while it's easy to get caught up in the daily movements of stocks, that's not necessarily true. That's why you need to step back and look at the big picture once in a while... Get the full story here: Read This If You're Worried About U.S. Stocks Today.

Market Notes
VACATIONERS AND BUSINESS TRAVEL ARE COMING BACK

Much like with entertainment, the pandemic crushed the travel industry. Between mandated restrictions and people choosing to stay at home, the entire industry suffered. But as more people get vaccinated, they feel safer doing everyday things like traveling again. And that’s great news for hotel and resort operators…

Wyndham Hotels and Resorts (WH) is the world’s largest hotel franchising company. It has more than 9,000 hotels in 95 countries – with familiar names like its namesake Wyndham, as well as La Quinta and Ramada. And as travel picks up, Wyndham’s business is recovering… In the most recent quarter, Wyndham reported net income of $68 million versus a loss of $174 million year over year. And president and CEO Geoffrey Ballotti said that increased demand from business and leisure travelers allowed the company to raise its dividend by 50%.

WH shares are in an uptrend – up 280% from their 2020 lows. They recently hit a new all-time high. And as things inch back to “normal,” that trend should continue… 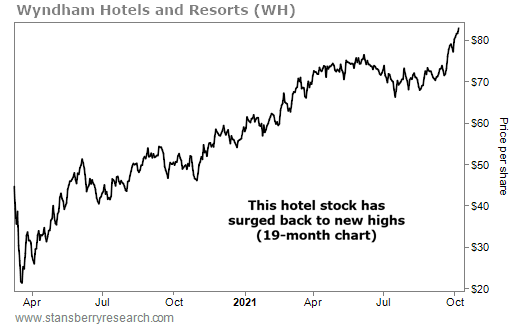