How to Profit From the Investing Shift of the Decade
By Dan Ferris
Wednesday, March 6, 2019

A tremendous shift is coming in the stock market...

I am not talking about a crisis or a bear market – though the market's volatility last year does play a role in it.

The shift I'm talking about will bankrupt many investors who've made gobs of money during this historic bull market over the past 10 years... and make millionaires out of a totally different type of investor.

Whether you are one of those millionaires will depend largely on your understanding of history. Anyone with a passing knowledge of stock market history should already know all about the massive shift I'm about to describe...

I'm talking about a shift in the balance of power between two huge investment forces.

This idea first appeared in 1924, when an investment adviser named Edgar Lawrence Smith published a terse little volume called Common Stocks as Long Term Investments. The book laid out the research Smith had done on the historical performances of stocks and bonds.

Originally, Smith thought he was sitting down to write a pamphlet on the superiority of bonds as long-term investments. He examined decades of stock and bond price data, from 1837 through 1922.

To his great surprise, Smith found that stocks had been the better long-term investment...

Today, this seems like a no-brainer. But back then, it was a tectonic shift in the widespread belief of the day. As Smith wrote...

He realized that when companies reinvested earnings into their businesses – rather than paying them out in dividends – stock prices went up over time.

Over the long term, Smith concluded, investors could count on a well-diversified portfolio of stocks to generate substantial capital gains and dividend income superior to the highest-grade bonds. He wrote...

In the selection of securities for investment, we must consider more than the expected income yield upon the amount invested, and may quite properly weigh the probability of principal enhancement over a term of years without departing from the most conservative viewpoint.

The idea of growth as conservative was radical. But by 1929, Smith's book was a bestseller and "growth investing" was hot, with shoe-shiners and hairdressers trading stock tips and playing the stock market on margin, despite Smith warning investors to avoid "the extreme misfortune" of investing at a market peak.

When the crash of 1929 came, it wiped out thousands of investors, leading the world into the Great Depression.

At the depths of the Depression, another analyst published a radical new view of investing that would change the world forever...

Graham called Smith's book, which totals 140 pages, a "small and rather sketchy volume." He made the case that Smith's book caused investors to focus too much on extrapolating the trend of earnings growth into the future.

Graham said the traditional approach to investing, which focused on "past records and tangible facts, became outworn and was discarded" in the 1920s as Smith's ideas gained popularity. "The past was important only in so far as it showed the direction in which the future could be expected to move," Graham said. (That's the classic mistake of all growth investing: the belief that trees will grow to the sky.)

In Graham's view, "The Common stocks-as-long-term-investments Doctrine," a clear reference to Smith's argument, was based on three ideas...

Graham and Dodd immediately pointed out the two weaknesses in these assumptions... They "abolished the fundamental distinction between investment and speculation." And they "ignored the price of a stock in determining whether it was a desirable purchase."

Graham was showing the world the flaws of growth investing. What's more, he advocated replacing it with sensible principles which today are known as "value investing."

Tomorrow, I'll show you that over the long term, value trumps growth. But we must conclude with a subtler point today...

Longtime readers of my work know the market tends to shift the balance of power back and forth between growth and value every several years. Growth has outperformed since 2009, and it looks like value is getting ready to take the lead for the next five to 10 years.

This is perhaps the single most exciting moment of my entire career as a value investor and equity analyst.

Value has underperformed growth for 10 years... And we are likely within several months of a major blow-off top of the longest bull run in stock market history.

Tomorrow, I'll show you why now is the time to start thinking like a value investor – before this huge shift takes hold.

Editor's note: Dan has found what he believes is THE single best investment opportunity of his career. If he's right, this stock could become the first 20-bagger in our research firm's history. And it could do even better as the shift to value plays out... Click here for more details.

"When we find an idea that we think stands head and shoulders above the rest, we're not afraid to stand firm on the quality of our work," Dan says. Learn more about his strategy for selecting the best businesses trading at bargain valuations right here.

Recently, Mike Barrett shared three important lessons from an investor's unforgettable story of stock fortunes won, then suddenly lost. Get the full details here: Three Ways to Be a Superior Investor in the Years Ahead.

Today’s chart highlights the benefits of investing in powerful brands…

Companies with iconic brands have a reputation for producing superior products. That means they can raise prices as needed, since folks will pay premiums to buy the names they know and love. Today, we’ll revisit one iconic brand whose stock is marching higher…

Nike (NKE) has built one of the strongest brands in the world, with a slew of celebrity endorsements. This $135 billion sportswear company sells athletic apparel, shoes, and equipment. Its logo is instantly recognizable as a marker for athletic performance… And the brand has amassed a huge following. That’s great for sales – in the second quarter, Nike grew its revenues by 10%, to $9.4 billion.

As you can see in today’s chart, NKE shares recently hit new multiyear highs. The stock has more than doubled over the past five years on a split-adjusted basis. It’s more proof that investing in great brands can lead to big gains… 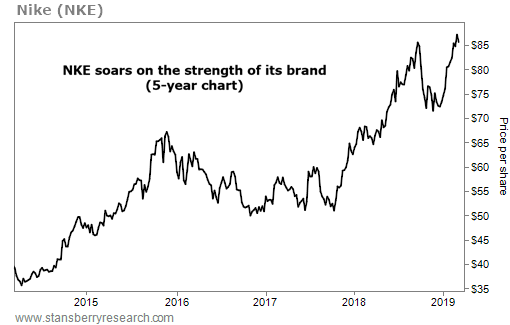