I Haven't Been Forthright Enough on China
By Vic Lederman
Thursday, December 19, 2019

It's easy to fall into a rhythm. And as a financial analyst, it's even easier for me.

You see, right now there's a generally accepted narrative on China. It goes like this...

China is a big and growing economy. But the trade war has been challenging. And now China is facing an economic slowdown on the horizon.

So, I've spent a lot of time countering this narrative. And I've fallen into the rhythm of addressing it... focusing on negative bias from Americans. Unfortunately, that has kept me from being as forthright as I want to be on China.

Today, it's time to correct that.

I want to provide you with the best information possible. And to do that, we need to do more than just look at the narrative of the day.

The reason why is simple. The accepted narrative ignores the truth...

China's economy is doing better than you could imagine.

Now, China will eventually face a recession... just like the U.S. will. There's no question about it. But that doesn't mean you should accept what the news is feeding you on this topic.

Seriously. Just about everyone has accepted the "slowdown on the horizon" narrative. But when you look at the raw data, it tells a different story.

To better explain this, I enlisted the help of Brendan Ahern. He's the chief investment officer of KraneShares. It's a New York-based company that builds funds for investing in China. And Brendan knows more about investing in China, from the Western perspective, than just about anyone.

Brendan took the time to outline his thoughts in a private e-mail to me earlier this week. Here's how Brendan sees it...

There has been a constant barrage of negative China headlines. And I think the average investor would assume that Chinese stock returns are near zero. But Chinese stocks are actually outperforming U.S. stocks this year and are among the best-performing countries globally.

He's right. It's hard to believe. But mainland Chinese stocks are more than keeping pace with the S&P 500 Index.

We can see this by looking at the KraneShares Bosera MSCI China A Fund (KBA), which tracks China's local A-share market. Take a look at how it compares with the S&P 500... 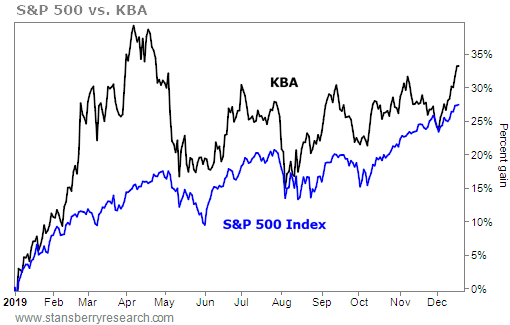 The supposedly struggling Chinese market has been neck and neck with the S&P 500. It's even slightly outperforming the U.S. today. Not bad!

It's not just the stock market, though. The whole economic story on China is wrong. Here's Brendan again...

A big portion of this has to do with China's real economy. The headlines continue to focus on China's manufacturing sector despite exports accounting for less than 20% of China's gross domestic product ("GDP"), while the service sector accounts for more than 50% of GDP.

Many still think of China as a manufacturing-based economy. And as such, they worry too much about the effect of the trade war.

Don't get me wrong. The trade war is important. But the sky isn't falling. At least, not yet.

In fact, China's economy is even showing strong signs of growth. As Brendan explains...

November's retail sales figures show 8% growth year over year. And Alibaba's (BABA) Singles' Day sales event – held annually on November 11 – is a strong demonstration that China's consumer is alive and well. On that day, $38 billion worth of goods sold versus Black Friday's $7.2 billion.

Consumer spending like this is an incredibly positive sign. And it should catch your attention... especially since China's economy is more service- and consumer-based than ever before.

So, just about everyone wants to tell you that the sky is falling in China. It's not.

Will China eventually face a downturn? Of course. But that doesn't mean you should ignore the reality of the data today.

China, despite its problems, is doing pretty darn good. Don't let the negative headlines distract you from that reality.

"This is a crazy situation," Steve writes. "And it's setting up a crazy opportunity." As China opens up its markets to the rest of the world, investors everywhere will flood into mainland Chinese stocks. And the time to take advantage is now... Read more here.

"Since the trade war began, analysts have predicted it would devastate China's economy," Chris Igou says. But this perception of China is flat-out wrong. And the reality is so different that we could actually see a massive rally in China over the next few years... Learn more here.

Today, we’re looking at a company in the early stages of a powerful tech trend…

Regular readers know we love finding big trends to invest in. For instance, the auto industry and other players are investing billions to develop self-driving cars. They use powerful computer chips that perform several hundred trillion operations every second… analyzing road conditions, traffic, and other hazards. That brings us to the leader in this space…

Nvidia (NVDA) is a $140 billion computer-chip designer. It focuses on chips that serve high-demand uses, like computer servers, gaming devices… and self-driving cars. For now, demand is declining in Nvidia’s existing segments. But as automakers buy more pricey chips for autonomous vehicles in the next decade, the market expects sales to take off. Just this week, Nvidia introduced a new chip system, which it anticipates will be incorporated into 2022 self-driving models.

NVDA shares have soared nearly 60% over the past year to a new 52-week high. As cars gain more self-driving capabilities, Nvidia is well-positioned to benefit… 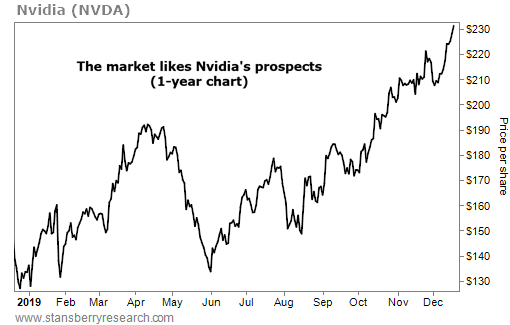