I'm Not Selling Yet â And Neither Should You
By Steve Sjuggerud
Thursday, March 18, 2021

I'm predicting this bull market will come to an end... and the Melt Down will begin... sometime this year.

Whether you agree or not, you might be asking a question...

"Why even participate? Why not just sell now?"

The answer is pretty simple. While I believe I know how things will play out, I don't think I'm smarter than the market.

So instead of forcing my will, the smarter plan is to sit back and wait. If we don't do that, we could miss out on fantastic gains.

To better understand my point, you need to think about the current psychology that's driving investor behavior.

Market commentator Josh Brown explained it best recently in his blog The Reformed Broker. Talking about cryptocurrencies and crazy investing ideas, he said, "That sounds stupid... I'm buying some just in case."

With 6% economic growth, plus zero percent interest rates, plus millions of people sitting around on their phones all day speculating in stupid sh*t on the internet, your regrets will multiply daily as said stupid sh*t continues to grow...

Simply put, you never know just how high a boom can go on. As the saying goes, "Markets can remain irrational longer than you can remain solvent." That goes for booms, too.

And we want to be on board for as much of it as possible... no matter how stupid it gets.

Trust me, it'll get stupid. I lived through the boom that peaked in March 2000. It was a crazy time... and the "stupid" gains were piling up.

As long as the mania continues, we'll continue to hold and even buy the best participating companies... How can we buy stocks when we know it's reached the mania stage? It's easy, we have a disciplined system of investing that's been proven to make money.

In short, we had an exit strategy – just like the one we're preparing now, 21 years later.

Here's how it went down back then... The market peaked in March 2000. Our exit strategy signaled for us to get out of most of our positions in April 2000. At the time, selling our positions because they hit their trailing stops felt like I was failing my readers. Times seemed so good. It felt so wrong to sell!

But in the end, it was by far the right thing to do. I had no idea that the market would keep going down, and down, and down... eventually bottoming – years later – in 2003.

This Melt Down will be brutal too. It could last for years... which means investors are potentially facing years of poor returns. This could be the last chance many of us get to make irrational gains in the U.S. market.

So just like I did in 2000, in the last Melt Up, I will follow my trailing stops... And GET OUT WHEN THEY ARE HIT.

That is our exit strategy. It is the only thing that will protect the gains you have made... and keep you from losing more money when the Melt Down arrives.

If you follow this plan, there's no reason to simply sell today. Instead, your plan should be to ride the Melt Up as far as you can... and use your exit strategy (trailing stops) to pocket your gains.

Things could get stupider from here. So don't sell yet. But have a plan for when the time comes.

P.S. I've been sharing the No. 1 thing I think you should do today to keep making great gains – and avoid leaving money on the table. It's a small step that won't take long. And it'll put you in position to be far wealthier... and not simply watch your gains disappear when the Melt Down arrives. It's all covered in my recent interview... Check it out right here.

"How you handle the Melt Down could be the most important event of your financial life," Steve writes. The coming crash will be slow and prolonged. And that makes now the time to get ready for it... Read more here: The Most Important Financial Event of our Lifetimes Is Approaching.

For the past decade, we haven't needed to be overly cautious with our investing. After all, when everything is working, you don't need a cool head. But with the Melt Down looming, you need to plan for the worst right now... Get the full story here: Why I'm Worried About You During This Melt Up.

Market Notes
IT'S A BULL MARKET IN TRASH COLLECITON

Today, we’re looking at a “boring” business that people rely on every day…

Regular DailyWealth readers know that even the most boring businesses can make for solid investments when they’re good at what they do. Such companies have been doing the same things for years… And long-term investors have collected steady returns along the way. Today’s company, for example, may not be exciting – but its business is booming…

Casella Waste Systems (CWST) is a $3 billion waste-management company. It offers a wide range of trash and recycling services for its customers – from routine pickups for homeowners to debris management for large construction sites. While collecting trash isn’t exciting, people need this service through good times and bad. And with more than 150,000 customers across the Northeastern U.S., the company’s profits reached $91.1 million last year – nearly triple what it earned in 2019.

As you can see in today’s chart, CWST shares have risen quickly and steadily. They’re up roughly 900% over the past five years and recently hit a new all-time high. Hauling away trash may be boring, but investors can’t complain… 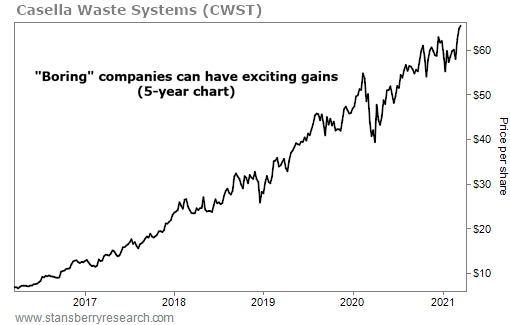