The last time we saw this many stock market bears was on March 5, 2009.

If you know your history, you know U.S. stocks bottomed four days later, on March 9... before taking off for the second-longest bull market ever. Stocks rose an astronomical 528% over the next 11 years.

It's crazy that folks hate stocks today as much as they did back then. Yes, the S&P 500 Index has dropped 25% during the current bear market. But that's less than half the decline we saw in the great financial crisis.

Still, everyone is scared. Everyone is bearish. And while it's not yet time to "buy the dip," according to history, this negativity is setting us up for outsized gains.

We could see 13% gains over the next six months, thanks to the setup that's playing out. That means we'll want to be ready to buy once the trend reverses.

Now, mom-and-pop investors are in the same boat. They're nearing record levels of bearishness as stocks tumble.

We can see this in the American Association of Individual Investors ("AAII") Investor Sentiment Survey. This weekly poll asks a group of individual investors how they feel about the market.

Specifically, it asks if they're bullish, bearish, or neutral on stocks over the next six months. And late last month, an astounding 61% of these folks were bearish. Again, that's the highest bearish reading since the 2009 bottom. Take a look... 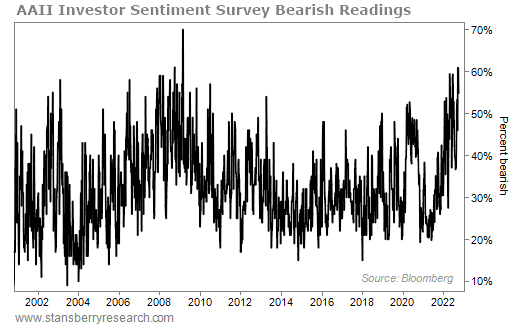 We all understand that lower prices can mean higher long-term returns. It's tough to take advantage of that in reality, though. As a bear market drags on, the losses make it feel like the bad times will never end.

But it's time to start opening up to the idea of buying again. That's because a bearish AAII reading this high is a powerful contrarian signal. It tells us higher stock prices are on the way.

To test this, I looked at each new instance where the bearish reading rose above 55%. That has only happened eight times since the data began in 1987. And each instance led to big outperformance. Take a look...

Since 1987, stocks have typically returned 3.9% over six months. But buying when mom-and-pop investors are scared crushes those results...

Buying during similar setups led to 4.1% gains over three months – and it led to 13.1% gains over six months. That's more than triple the standard return for stocks.

Of course, this doesn't give us the green light to buy today. We still need to wait for an uptrend before acting. Plus, sentiment is a blunt tool. It's not a great way to know exactly when to buy.

It's much better at telling us how good an opportunity is.

The average investor hasn't been this scared since the market's 2009 bottom. That makes for a promising shot at historic gains... So be ready to buy when the trend turns.

P.S. If you watched my colleague Dan Ferris discuss stocks last night, you know he's intensely bearish today. While I believe the worst of this bear market is likely over, he says the worst is still to come.

But we agree on this... What's happening now is setting up a rare chance to buy and compound your wealth for the long term. As Dan just told his readers, "A major opportunity to buy stocks at bargain prices is approaching."

So if you missed his interview, and you want to learn more about his plan to survive and find the best ways to profit, check it out right here.

"The scars of 2008 stuck with thousands of investors," Brett writes. Even as stocks recovered, more than $1 trillion never moved back into the market... And a lot of folks missed out on hundreds-of-percent gains. Don't make the same mistake today... Read more here.

"Today, the pros are the most bearish they've been in decades," Brett notes. Fund managers have fled the stock market. It's another level we haven't seen since the 2008 financial crisis – and back then, it was a contrarian signal... Learn more here.