Most big market moves aren't that hard to figure out...

You don't need an MBA or hedge-fund experience. All you need is a basic understanding of sentiment.

When times are good and people are buying stocks, new cash floods the market – driving prices higher. This can go on for a long time. But the music stops when no new buyers are left.

With no one to prop up prices, stocks can only go down. The opposite is also true...

When everyone is selling, they move to cash, and markets tank. Eventually, there's no one left to sell, and fear is widespread.

When this happens, so much cash is sitting on the sidelines, earning nothing, that investors have to use it somewhere. Folks start to buy stocks again, and the market reverses.

We saw this back in 2020 during the COVID-19 crash. Investors panicked as the virus ripped through our country and caused the economy to shut down. They sold their stocks and were left with a big pile of cash.

Soon enough, they started putting that money into stocks again. Once some cash entered the market, prices began to rise. And that tempted new buyers who were sitting on a ton of cash to buy as well. And on it goes...

Anytime you see investors with a good chunk of their portfolios in cash, it's a bullish sign. Eventually, they'll want to get back in on stocks. No one wants to be left behind, parked in cash as markets are soaring.

This cycle is repeating now...

Today, lots of fearful investors are hiding in cash. They're worried about the Federal Reserve... COVID-19... inflation... Russia... the supply chain... a bear market in tech stocks... you name it.

According to Bank of America's monthly survey of global fund managers, fund managers recently increased their cash positions to 5.9% in March.

This was the highest cash level since April 2020 – early in the COVID-19 pandemic. And if you remember back to April 2020, that was the worst time to hold cash... and the ultimate time to buy stocks. 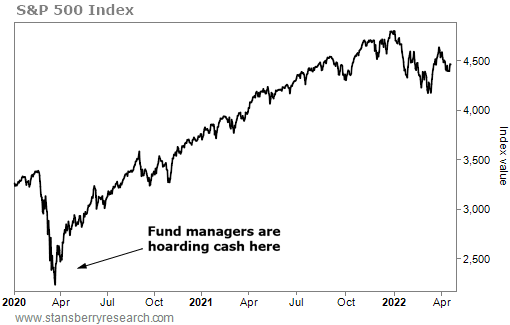 As of this month, fund managers' cash positions eased down to 5.5%. But that's still roughly on par with what we saw in 2008 – during the financial crisis. Take a look... 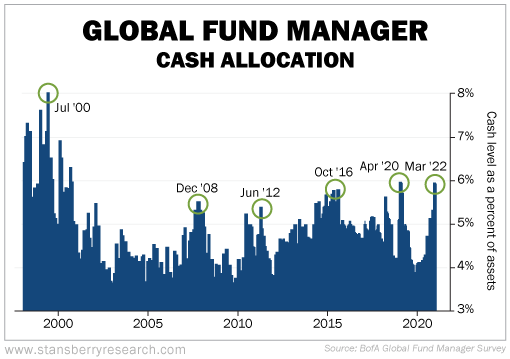 Investors are being too cautious. And it's a bullish signal for us...

Lots of money is just sitting around earning nothing. And it will soon be unleashed on the market, driving up prices. It's hard to remain in cash for long. Investors demand returns on their capital.

Of course, what you're reading today is the opposite of what you're seeing from major news outlets. The media is telling you that it's time to be scared.

Yes, there are legitimate concerns in the world. But almost all of that is already priced into the market. Any positive surprise – even a small one – could move the needle for investors who are on the sidelines.

What's more... my team and I aren't just bullish because investors are holding so much cash. We're seeing another sign that investors are overly fearful...

We're talking about the yield curve: the difference between long-term and short-term interest rates.

Typically, long-term rates are greater than short-term rates because investors demand to be paid more for locking their money away for a longer period of time. The longer the duration, the greater the risk.

When the curve inverts, it means short-term rates have become greater than long-term rates. And that spells trouble for the economy. It means investors are so worried about short-term growth, they're selling short-term bonds and pushing their yields higher. (Bond prices and yields move in opposite directions.)

The yield curve briefly inverted earlier this month. It's only natural to be concerned by this...

That's because the yield curve is the most reliable gauge of recessions. Over the past six decades, it gave only one false positive (in the mid-1960s). Even then, the economy did slow, though the drop wasn't officially a recession.

But we're not panicking. After the yield curve inverts, the good times typically continue for a while... On average, the economy doesn't fall all the way into recession territory until roughly 15 months after an inversion.

Times are scary. We understand that. But one strategy – option selling – works best when folks are afraid...

In my Retirement Trader advisory, we sell options as "portfolio insurance." When we sell calls and puts, the buyers will pay more when they're scared. And this strategy works especially well when you have extreme fear combined with a flat or rising market.

Investors are already panicking. The financial media is sounding alarm bells. But while a yield-curve inversion is a bearish long-term sign, it's not a problem for short-term options trades.

With a recession not likely for many months, we want to take advantage of all the fear that's out there. That makes this a great time to sell options.

Editor's note: With Doc's crisis-proof strategy, you don't have to lose sleep worrying about the next crash... This trading technique is designed to work in bull markets, bear markets, and especially in highly volatile markets like the one we’re in today. For the past 12 years, it has been helping some Americans make as much as $4,000 a month in extra income... Learn more about it here.

"Markets tend to do the opposite of what everyone is positioned for," Doc says. And since investors are extremely fearful right now, we can profit using one of our favorite strategies... Read more here: A Smarter Way to Use This 'Bulletproof' Rally Indicator.

"Experienced investors see their biggest gains in times of chaos," Doc writes. With all the uncertainty in the market today, now is the best time to earn extra income using this technique... Learn more here: The Prisoner-of-War's Secret to Outsized Gains.

Market Notes
THIS 'BASIC' BEVERAGE GIANT IS SOARING DESPITE INFLATION

Today, we look at yet another company that’s thriving on “selling the basics”…

Longtime DailyWealth readers know companies that sell everyday products can make for solid investments. They’re safe and reliable, because they keep consumers coming back for more on a regular basis. Today’s company sells products you may even have in your fridge right now…

Constellation Brands (STZ) is a $50 billion producer of beer, wine, and spirits. It sells more than 100 brands, including Corona and Modelo beer and SVEDKA vodka. Lately, rampant inflation has eaten into profit margins across industries… But Constellation still beat Wall Street’s expectations in the latest quarter. And since folks will always look to unwind with a cold beer, it’s no wonder… The company’s quarterly sales climbed 8%, reaching $2.1 billion. And full-year sales rose 2% to $8.8 billion.

STZ shares have soared 65% over the past two years, recently hitting an all-time high. Our colleague Dan Ferris also recommended the stock to Extreme Value subscribers in April 2020… And readers who followed his advice are sitting on 86% gains. Congrats to Dan and his team on a great pick! 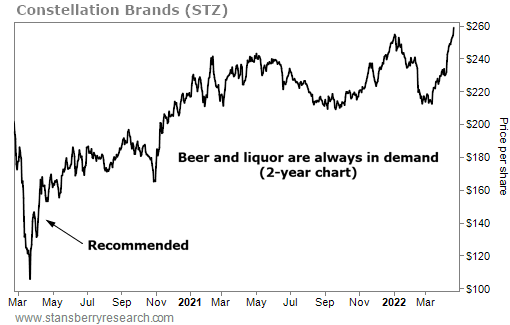