Our Lesson From Two Unsung Heroes of the Last Melt Up
By Steve Sjuggerud
Tuesday, December 8, 2020

Andy Kessler and Fred Kittler turned down $1 billion in a single week in 1999.

As it turns out, they made the right decision...

Andy and Fred were Wall Street hotshots. They'd each spent more than a decade in high finance. And they joined forces to start a hedge fund – Velocity Capital Management – in 1996.

Their long history in the market prepared them for the great 1990s Melt Up. And since they focused on tech stocks, their fund was a roaring success. But it's what they did after that success that was most important.

Today, with the Melt Up in place and the potential Melt Down in the future, we need to understand this lesson. It's the key to protecting our investment gains...

Back in the dot-com era, it didn't take long for Velocity Capital Management to start producing huge returns. The fund made gains of 100% in 1998 alone. But that was just the beginning.

In 1999, the fund made investors 377%... in just one year. That's an incredible return, even given the tech-boom backdrop.

These big returns caught the interest of major investors. But just as those investors were getting excited to put money to work, Andy and Fred were getting cautious on the markets.

By 1999, they'd become uneasy about how much money was flowing into tech stocks. Stocks were shooting up hundreds of percent in a matter of weeks... And their fund was in on the fun.

The Melt Up had been in full force for a couple years already. So, after taking advantage of it from 1996 through 1999, the two decided to start trimming their positions. But then, they took it a step further.

In the summer of 1999, the pair of investment managers did the unthinkable... They turned down a total of $1 billion worth of investment dollars, from two separate investors, in a single week.

When it comes to managing money, you want to generate great returns, of course. But what you really want to do is raise more money. Turning down an amount that would roughly double your fund size is almost unheard of.

Andy and Fred didn't just turn down the money, though. They started giving money back to clients as well. And they completely wound down the fund by 2001.

As we know now, that was a brilliant call. It was exactly the right thing to do for their investors. Not only did Andy and Fred take full advantage of the Melt Up... but they got investors out near the peak, too.

Clearly, these two nailed the 1990s Melt Up. And we can learn a lot from their success.

Our goal today is to do what they did... ride the Melt Up as long as we can – and get out when the time is right.

That's easier said than done. In the thick of a Melt Up, it feels more and more foolish to pull out of the market. Stocks continue to hit new highs. And it seems like all news is good news.

You'll think to yourself, "Why bet against that? It seems foolish." But when the time comes, we've got to be willing to sell.

Today is not the day. The trend is up, and the Melt Up is on. But we have to be ready for the red that will eventually follow.

Andy and Fred returned cash to investors at the height of the dot-com-era Melt Up. They made sure their returns weren't wiped out in the eventual Melt Down.

I'll be watching the markets closing in the coming months. And I'll be following an exit plan to cut my losses short. That means following my stops... first and foremost. You can read more about this idea right here.

What's happening today is incredible. And I plan to stay on board as long as possible. But when the time comes, I'll sell. I hope you'll do the same.

Stocks are back to new all-time highs. After breakouts like this, you might think we're in for a cooling-off period. But based on history, new highs just prove the Melt Up still has room to run... Read more here: Dow: Next Stop 40,000.

"There will be times when the market puts your emotions to the test," Steve writes. Every Melt Up goes through temporary pullbacks. You need to make sure you recognize them so you don't jump ship and miss out on big gains... Get the full story here: A Melt Up Is Never a Smooth Run Higher.

Today, we’re checking in on a company that’s “selling the basics” to folks at home…

Through good times and bad, companies that sell everyday products make for solid investments. There’s always demand for basic staples like cleaning supplies, cereal, soda, and beer. And with COVID-19 cases on the rise, folks have made sure to stock up on their favorite standbys. That’s good news for today’s company…

Constellation Brands (STZ) is a leading producer and marketer of beer, wine, and spirits. It sells popular brands like Corona beer, Ruffino wine, and SVEDKA vodka. Restaurant and bar closures have been tough for this company… But folks are still drinking at home. Constellation saw nearly 5% growth in beer cases sold to retailers. And despite a 4% fall in sales in the latest quarter, the company still managed to bring in $2.26 billion – beating analysts’ expectations.

As you can see in today’s chart, shares of STZ have risen more than 100% since their March 23 bottom, recently hitting a fresh 52-week high. As people keep loading up on “basics” at home, STZ should head higher… 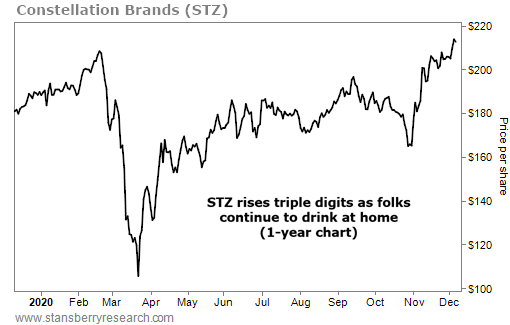