What to Make of the Market's Best Quarter in a Decade
By Chris Igou
Tuesday, July 14, 2020

A powerful trend is setting up right now. And if you've been reading DailyWealth lately, you've probably noticed it.

Despite everything going on today, positive signs are piling up in the U.S. market...

As June came to an end, so did the first half of 2020. While the first three months of the year were brutal for the S&P 500 Index, stocks came roaring back in the second quarter.

In fact, the broad U.S. market rallied more than 15% in the three months ending in June. A rally of that magnitude has only happened eight other times since 1950.

Staying long might feel uncomfortable right now. It might go against your instincts. But as it turns out, rallies like this one tend to be a good sign for stocks. They often mean double-digit gains are still ahead.

Today, we are just 6% away from hitting brand-new highs in the S&P 500. And it's likely that the U.S. market will break that record in the coming months.

You see, roughly 70 years' worth of data tells us that today's rally in stocks is far from over...

When the S&P 500 has a stellar quarter like it did over the last three months, it's not a sign of trouble ahead. Instead, it tends to lead to bigger gains in the short term. 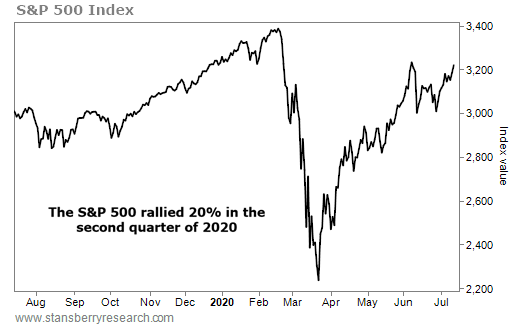 Last quarter's 20% rally broke a decade-plus record. It marked a turnaround from the devastating blow the S&P 500 took in February and March. And based on history, that turnaround is likely to continue.

Since 1950, similar quarterly rallies have often led to double-digit gains, as you can see in the table below... 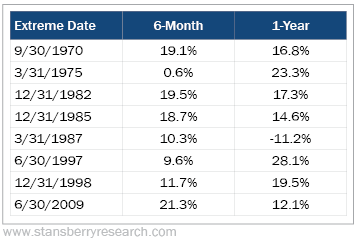 Rallies like today's have led to double-digit gains six out of eight times over a six-month period. And all the six-month returns were positive.

Looking out over a year, seven out of the eight occurrences led to double-digit gains. The only loser came in 1987... when after rallying 20% in the first quarter, stocks fell 11% over the next year.

Most folks don't believe it... But the latest record-setting rally isn't a sign that we should be cautious. So please, don't fall into that trap

Instead, history shows that if you buy U.S. stocks today, there's still plenty of upside potential left. And double-digit gains are likely over the next year.

"When do you get back in after getting out?" Steve asks. There are mathematical and emotional answers to this question. And right now, we're getting signals that both of these criteria say it's safe to get back in... Read the full story here: How to Know When to Get Back In.

"It might seem crazy, but now is a fantastic time to buy," Chris writes. Until recently, investor fear was at record highs. But with this panic subsiding, history tells us that U.S. stocks are a great opportunity today... Read more here: Falling Fear Says It's Time to Buy.

Today, we’re checking in on a company that’s thriving despite the recent crisis…

Regular readers know we love investing in companies that “sell the basics.” These companies may not deliver exciting growth, but they sell the products that we use on an everyday basis – which helps them bring in reliable sales. Today’s company is a perfect example…

Church & Dwight (CHD) is a $20 billion household products giant. It owns well-known brands like OxiClean detergent, Arm & Hammer cleaning products, and more. These goods are in demand no matter what’s going on in the economy. And as we’ve seen lately, they’re even more in demand when people need to stock up on supplies… Church & Dwight’s net sales jumped 11.5% in the most recent quarter, reaching nearly $1.2 billion. The company said it saw a “significant increase” in demand because of COVID-19.

As you can see in today’s chart, CHD is up nearly 40% since bottoming on March 25, and it just hit a fresh all-time high. As long as people still use Church & Dwight’s consumer goods every day, this stock should continue higher… 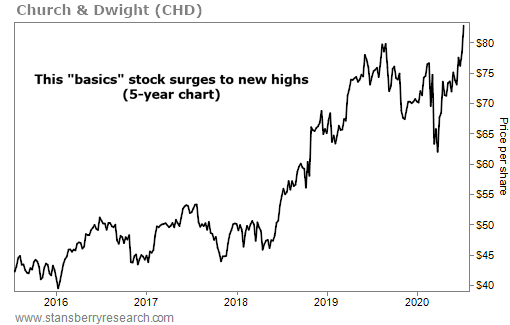