There are a lot of names you could call an analyst like me.

But of all the names I've heard, there's one label that I genuinely dislike.

I don't want to be connected with the ephemeral. It's fleeting. A conjurer's ideas dissipate like smoke. They're grounded in nothing. So I try to base darn near everything I do in data. And not just data for the sake of it... but data that is meaningful to the topic at hand.

The problem is, the markets are big. They're crazy complicated. And most of all, they're driven by humans.

Like it or not, humans are emotional. So not everything about investing fits perfectly into the data box.

That's OK, though. Even human emotions can give us clues about the market. And more specifically, emotions can help answer one of our most important questions today...

Are we near the top in stocks?

As investors, we spend a lot of time trying to manage our emotions. This is especially important now, with a Melt Up happening in U.S. stocks.

The Melt Up thesis tells us that before stocks crash, they will charge furiously upward. And while it might seem far-fetched if you think stocks are already as high as they can go, this idea is rooted in history...

It happened in Japan in the 1980s. And it happened in the U.S. in the 1920s and 1990s. History is littered with markets that experienced a Melt Up before they peaked.

This is intuitive for most investors. Bull markets tend to end with a bang, not a whimper. And that "bang" has a specific emotional feel to it.

If you've been investing for more than a few years, I'm sure you've gotten swept up in it. If you're anywhere near the action, it's impossible not to get excited during a boom.

Think about bitcoin in late 2017. It felt like darn near everyone was getting rich. And if you weren't one of them, you felt bad. You were likely itching to get in on an action.

Investors were frothed up to the max. Heck, everyone was. It felt like the whole world was fixated on the rising price.

Now, maybe you sat that one out. I did. Even still, the excitement was intoxicating.

What about the dot-com boom of the '90s? Everyone was getting rich in tech stocks.

It was simple. All you had to do to make money was take the latest hot tip from your buddy. Every tech and Internet stock was a winner. And it felt great!

That is the emotional feel of a market peak. It's the moment where it feels like the whole world stops to focus on the boom.

Now ask yourself, is that what the market feels like today?

The answer is obvious. Folks simply aren't euphoric today. Instead, they're harboring plenty of fear. That has been true for years. And it remains true today.

So simply put, you know we're not at a market peak... because it doesn't feel like one.

Is that entirely "data driven?"

Maybe not. But it would be foolish to ignore how the market "feels" at a time like this. If you do, you're likely to get swept up in fear, move out of stocks – and miss the biggest gains of the Melt Up.

Instead, here's what you need to do today... Stay long. And don't let the naysayers scare you out of the market early.

You know what the end of a Melt Up feels like. And we're not there yet.

P.S. Last week, my boss Steve Sjuggerud aired a special event to reveal a big shift in today's Melt Up. Thousands of folks tuned in. But if you missed it, you can still watch a replay of the big night... and learn just how high the rally could go before the blow-off top. You'll even find out which types of stocks will win big as it plays out. Check out the video right here.

Markets have been soaring to record highs, and investors have taken note. But without the euphoria we've seen at the final peak, we still haven't reached the top... Read more here: The Best Way to Profit From the Melt Up.

Market Notes
THESE BRANDS WIN IN ANY KIND OF MARKET

Today, we’re checking in on a business that succeeds by “selling the basics”…

Longtime readers know that companies that sell everyday products can produce healthy long-term gains. Folks consume their favorite staples, then go out and buy more… ensuring steady sales in good times and bad. Our colleagues Ben Morris and Drew McConnell have recommended one of these companies to their readers…

PepsiCo (PEP) is a $200 billion snack and drink giant. It boasts popular soft-drink brands like Pepsi and Gatorade, as well as food and snack brands like Lay’s, Doritos, and Quaker Foods. People are going to buy these products for years to come, no matter what the broader economy is doing. And that’s great for sales… Pepsi recently reported sales of $67 billion for 2019, up 4% from the year prior.

In March 2019, Ben and Drew recommended shares of PEP to their DailyWealth Trader subscribers. Readers who followed their advice are sitting on gains of 23% in 11 months… And the stock recently hit a fresh all-time high. Congrats to Ben and Drew on another great call! 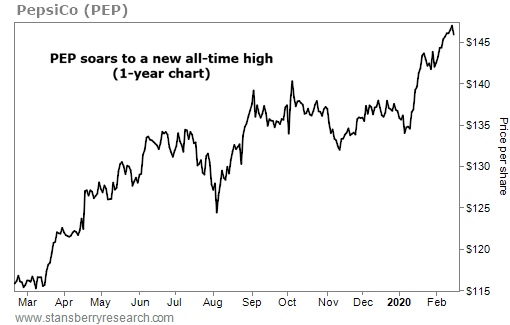