The Best Way to Profit From the Melt Up
By Steve Sjuggerud
Tuesday, February 18, 2020

Figure out what matters and ignore the rest.

If there's one rule I've learned from over two decades in the market, it's that.

To succeed, you need to identify what's really driving an investment. Then you stop worrying about everything else.

For the U.S. market, I've had a simple script since 2015. That's when I first unveiled my Melt Up thesis... the idea that this bull market wouldn't end with a whimper. That instead, it would crescendo with a furious blow-off top.

I've done everything I could to share this message since. I've taken out ads, hosted events, and written dozens of articles.

My goal has been simple... to make sure as many Americans as possible understand and profit from the Melt Up – before it's too late.

Here's the thing, though. The final stage of the Melt Up is just getting started.

Nothing has changed in my main thesis. So I've consistently ignored the noise. And I still am.

The reality is, there's still plenty of time to capitalize on the Melt Up. And I've even created the ultimate way to do it.

In October 2018, I took on what seemed like an impossible task.

I built a Melt Up-focused portfolio for my paid readers. It came with an audacious goal... returning 100% or more before the Melt Up ended.

This wasn't a single high-risk stock idea. It was a fully allocated, nine-investment portfolio. And I built it to be safe and profitable as the Melt Up marched forward.

I've written plenty of times about the Melt Up... and the sectors that I expect to soar the most in the coming months.

Technology stocks and biotech stocks led the Melt Up during the final push of the 1990s dot-com boom. The tech-heavy Nasdaq jumped 86% in 1999 alone. And biotech stocks doubled over the same period. Take a look... 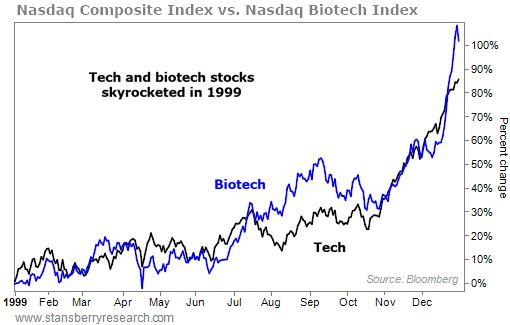 Knowing this, I loaded my Melt Up portfolio with tech and biotech opportunities. And they've led us to weighted returns of 47% in just 16 months.

So far, we've racked up four triple-digit winners along the way... including one open gain of 230%.

Still, you might think we only took advantage of a booming market. But we've actually done much better than stocks since we launched. Take a look... 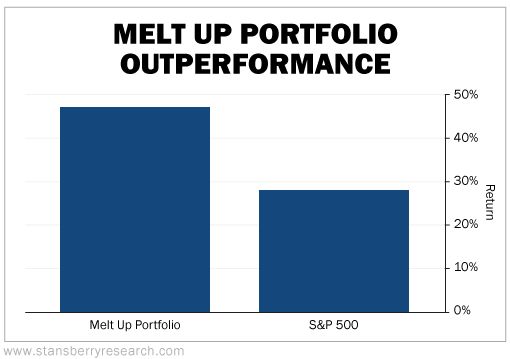 We're not quite to my 100% goal. But I'm confident we'll get there before the Melt Up ends.

Most important, we're not at the end yet...

Stocks have been soaring. Investors are getting more interested. But we haven't seen the all-out euphoria that I expect during the final peak.

Tech and biotech have been winning recently. And history tells us that should continue. So if you own those sectors today, you'll likely do quite well.

This could be the last time we'll see a moment like this in our lifetimes. And I'm still doing all I can to help as many folks as possible take advantage of it...

That's why I hosted a massive Melt Up event last week. An amazing 29,065 folks tuned in to hear my thesis. But if you missed it, we're running a replay that you can view for free right here.

I used the event to make a major update to my Melt Up thesis... and explain why I believe the best is yet to come. I urge you to check it out now, if you haven't already. It will only be online until the end of the week.

If my Melt Up portfolio isn't for you, that's OK. But please don't miss this rare opportunity in stocks. The Melt Up is here... Take advantage of it!

If you've been waiting, this is it. The Melt Up is underway... And what's happening in the markets proves it. Get the details from Steve in his recent essay: Definitive Proof That the Melt Up Is Finally Here.

"Don't try to outsmart the Melt Up!" Steve warns. This is no time to wait for the next dip in the market... Missing even a few of the best days could take a big chunk out of your returns. Read more here.