Definitive Proof That the Melt Up Is Finally Here
By Steve Sjuggerud
Wednesday, February 12, 2020

Still not sold on my Melt Up thesis?

Well, this essay is for you, my friend. And believe me, I get the concern.

I've been writing about the coming Melt Up for years. I first pitched the idea in 2015, long before the mainstream media latched onto the phrase.

The Melt Up is simply the final, euphoric push of a long bull market. It's where the biggest and most explosive gains happen.

Few believe that's possible today. They're focusing on fear and missing the opportunity in front of them. But the reality is, the Melt Up is already happening – right now.

Today, I'll share the simple fact that proves it...

That explosive rally was driven by the Nasdaq. That's where all the hot tech stocks were then... And it's where they are now.

I believe this time around, we'll once again see incredible outperformance in U.S. stocks concentrated in these major tech names. History proves it – and I try to never argue with history when it comes to investing.

When you look at the previous Melt Up in stocks back in 1999, you can actually see the point where tech stocks left the boring companies in the dust.

The following chart shows this well. It compares the overall stock market – the Dow Jones Industrial Average – with the tech-heavy Nasdaq during the last 12 months of the bull market... 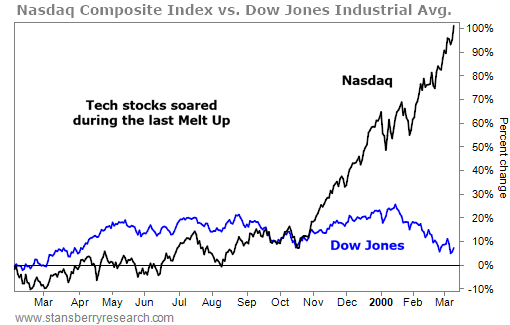 Tech stocks tracked in line with the overall market for most of 1999. Then, they took off – soaring more than 100% in less than six months.

It's not unusual at all for tech stocks to lead the way in a stock market Melt Up. In fact, it's typical. Investors latch onto a good speculative story, and they buy – regardless of valuation.

I expect we'll see the same thing happen this time around. In fact, I've been saying it ever since I first called for a new Melt Up in stocks. And sure enough, it's already started.

No one's been paying attention. But tech stocks have been crushing the boring Dow Jones Industrial Average over the last year. Take a look... 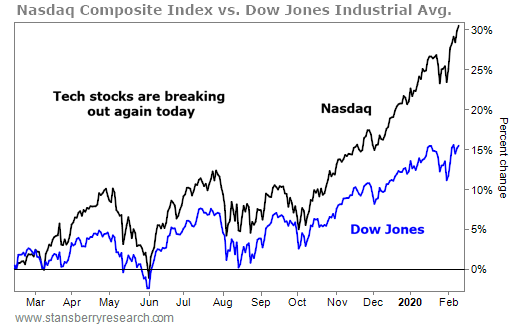 The last 12 months have been great year for stocks, period. But there have been clear winners.

The Nasdaq has been outperforming the overall market by a wide margin. It has nearly doubled the return of the Dow over the last year.

This, my friend, is the definitive signal of the Melt Up. The tech boom of the 1990s started with a general market rally... But it wasn't until the Nasdaq started outperforming that things really heated up.

That's happening right now. And it tells me the Melt Up is here.

Tech stocks were the big winners last time around. And I expect that'll hold true this time, too. But you can do a lot more to take advantage of what's going on...

The details are too much for today's essay. But tonight at 8 p.m. Eastern time, I'm holding an online event to discuss all things Melt Up. It's totally free, and I'll give you a thorough update on what I see kicking off in the markets.

I'll also give away the name and ticker symbol of a stock that could soar as much as 500% during the Melt Up. Believe me, this is a company you'll want to own over the next 12 months. And we won't be sharing it in any replay of the event... So I urge you, don't miss this!

Editor's note: This Melt Up is truly once-in-a-lifetime. Most of us will never get another chance at this kind of wealth-creation event... So you must make the right moves now.

TONIGHT at 8 p.m. Eastern time, Steve and legendary stock-picker Matt McCall will share why the biggest tech-stock gains won't come from companies like Apple (AAPL) or Amazon (AMZN)... and what you should do instead. Sign up here to watch the event.

"Are you back to waiting for the next big crash before you put money to work?" Steve asks. Melt Ups happen quickly. And missing even a few of the best days in the market could be hazardous to your returns... Learn more here.

"Stocks are at new highs," Vic Lederman writes. "That doesn't mean they can't go higher, though." You might see record highs as a sign of the top. But the truth is that expensive markets don't just collapse quietly – they tend to get more expensive before the end... Read more here.

When the economy is booming and unemployment is low, there’s strong demand for housing. That makes it a great time to own property… And an easy way to do that is through real estate investment trusts (REITs) – “landlord” companies that pay at least 90% of their profits to shareholders. This housing REIT is thriving today…

Mid-America Apartment Communities (MAA) owns more than 100,000 housing units in 16 states and Washington, D.C… with many properties in the booming Southeast and Southwest regions. With housing in high demand and folks earning a steady income, MAA was able to raise rents on its existing apartments by 4.3% over the past 12 months – bringing total revenues to more than $1.6 billion last year.

MAA shares are up about 40% over the past year and just hit a new all-time high. Shareholders also enjoy a dividend yield of nearly 3%. Housing is strong today, and REITs like MAA can be a great way to profit… 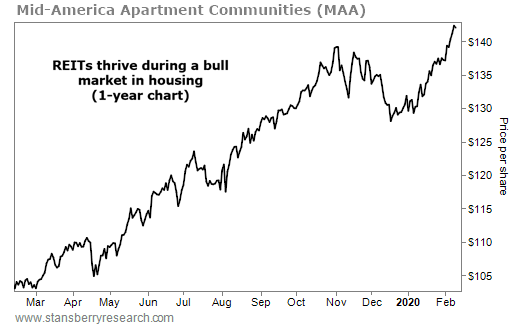