Forget "buying the dip"... Investors are buying the crash.

That's what's happening in a specific group of high-growth stocks. These are the stocks that soared coming out of the pandemic... The group jumped roughly 350% in less than a year.

Now it has crashed back to Earth, wiping out all of those gains. But investors still won't throw in the towel.

Instead, they're pouring dollars into this group of stocks. It's a crazy situation – and it likely won't end well for those buying.

If you want the poster child for the post-COVID-19 boom, look no further than the ARK Innovation Fund (ARKK).

Cathie Wood runs this actively managed exchange-traded fund ("ETF"). It focuses on up-and-coming tech businesses, where profits take a back seat to growth. And the fund had an incredible track record even before it took off.

ARKK was up roughly 300% in the three years before the pandemic peak. However, it wasn't until the COVID-19 bottom that the gains really went crazy.

ARKK soared roughly 350% from that bottom to its 2021 top. But as you can see in the chart below, those gains have completely evaporated... 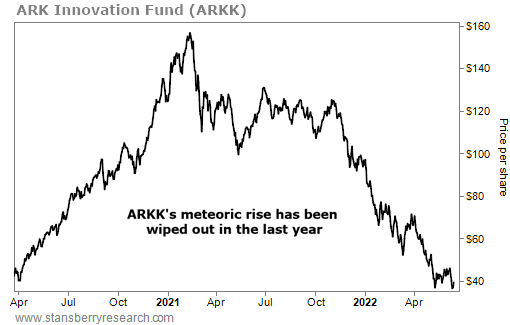 This has been an incredibly painful "round trip" for anyone who bought in early. But of course, that's not a lot of folks.

Investors tend to pour money into these kinds of trends after they've already soared. That happened with ARKK. And that's normal.

It's what has happened since that's remarkable...

We can see it by looking at ARKK's shares outstanding. Remember, this is an ETF. So when investors pump money into the fund, it creates new shares to fill demand. Similarly, investors pulling money out means the total share count will decrease.

As you'd expect, ARKK's shares outstanding soared in 2020. But look at what they did next... 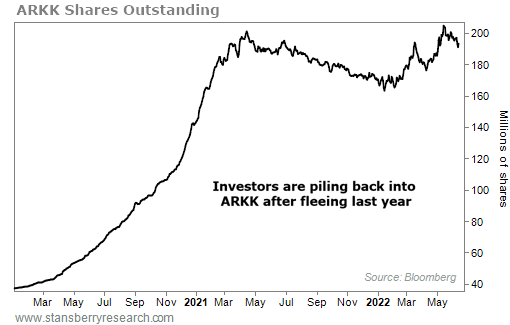 Shares outstanding took off when ARKK soared and dropped as the fund fell last year. This year is a different story, though...

Investors began pouring money into ARKK as the crash intensified. The fund has seen net inflows of $1.5 billion so far this year, despite a year-to-date price decline of more than 50%.

At a glance, this might seem like a smart move. Buying after an 71% fall should lower your potential downside, after all.

The problem is, there's no clearer downtrend out there today than ARKK. The fund has been crashing for well over a year.

Now, that won't last forever... But it will likely last longer than most folks can stomach. And it could mean that a lot of them will end up selling at the worst possible time.

The easy way to avoid this kind of carnage is to watch these moves from the sidelines. Figure out exactly what you'd like to own... and then jump in only after an uptrend emerges.

In the case of ARKK, investors are buying like they can't lose. But there's no uptrend in sight. These situations end badly... And you should avoid this one today.

"Folks tend to be most afraid when things are at their worst," Brett says. With the inflation-related pains we've been experiencing lately, it's not surprising to see consumers sitting on the sidelines. But history tells us that when the uptrend returns, the upside could be huge... Read more here: A Powerful Contrarian Indicator Is Flashing Now.

When the markets are in turmoil, it's crucial to know what professional investors are doing with their money. Right now, Wall Street is looking for safe, secure assets. But following their lead could be a huge mistake... Learn more here: The Investment Pros Haven't Been This Scared Since 9/11.