Making Triple-Digit Gains on the 'Collapse of the Bullies'
By Bill McGilton
Friday, March 13, 2020

Justin Raizk felt like a kid in a candy store.

He didn't have any money, but he could take home anything he wanted... an iPad, a Samsung television and camera, or new Bose speakers.

This was surprising – but welcome – news to Raizk. He had recently lost his house to foreclosure. His credit was destroyed. And when he walked into his local Conn's (CONN) department store to visit a friend working there, the last thing he expected was to walk out with a cart full of new electronics.

Conn's is a retailer of furniture, mattresses, home appliances, and electronics. It is known for offering excessive lines of credit to people who can't afford them. In fact, its business was built around providing in-house financing to subprime borrowers just like Raizk.

But by doing this, subprime lenders like Conn's have also mired themselves in a no-win situation. And if you know this, it's possible to profit from their demise.

I'll give you the details today. But first, back to our story...

Not long after Raizk entered the store, a sales associate asked him if he was interested in a line of credit. Raizk doubted anyone would give him credit, but he didn't see much harm in filling out an application.

Within a short time, the sales associate returned and congratulated Raizk on qualifying for an immediate $14,000 line of credit. Raizk was shocked. His credit score was abysmal. As Raizk said, "I assumed that nobody would offer me credit for something like seven to 10 years."

Over several visits, Raizk racked up $3,000 in debt. He agreed to pay it back over 32 months at an annual interest rate of 25%.

You can guess what happened next...

Raizk fell behind on his payments. He lost his health care coverage at work and had to pay more out-of-pocket expenses for health insurance. As a result, he could no longer afford the payments to Conn's for the electronics he purchased. A column in the New York Times called "The Haggler" described Raizk's plight in 2014.

This is typical in the world of subprime lending. People with poor credit histories overextend themselves by buying rapidly depreciating assets. And to make matters worse, they agree to pay high rates of interest for things they can't afford to begin with.

Conn's underwriting got so loose that it has been a defendant in several lawsuits. It extended credit to people with credit scores as low as 400. That's about as low as you can go... Credit scores range from 300 to 850. And Conn's routinely provided credit lines up to $10,000 for "thin files" – people with no credit history at all.

It hired a "Dream Team" of 10 to 15 experienced salespeople to travel around the country and help new locations make their $1 million monthly sales quota. The Dream Team automatically approved credit lines to high-risk borrowers and then encouraged them to max out their new credit lines.

We've covered subprime lenders many times in our Stansberry Research publications. And I've been paying close attention to them in my research.

It's a big story – and I won't go into all the details today. But the key thing to understand right now is this... In a financial crisis, subprime borrowers are typically the most exposed to the downturn.

They're the first to experience job cuts, and they have the least amount of savings to fall back on.

When I brought Conn's to the attention of my readers in 2018, 80% of its customers were below-prime credit – with credit scores ranging from 501 to 650. This included 37% less-than-prime, 35% subprime, and 8% deep-subprime. And almost 30% of Conn's customers were not paying as agreed.

Worse, the company had a policy of "re-aging" loans – or modifying or delaying loan payments for customers who are having trouble paying. Conn's doesn't consider "re-aged" loans delinquent. It's a game a lot of dubious subprime lenders play to make their loan portfolios look better.

Altogether, nearly a third of Conn's $1.5 billion loan portfolio was made up of folks who were either not paying, or having trouble paying.

Re-aged loans just kick the can down the road. Similar "can kicking" triggered the last financial crisis. Back then, it was called "extend and pretend." Either way, the customer isn't paying as agreed.

And while interest rates are falling today, the easy money can't continue forever. As interest rates rise, non-payment will only get worse in the future for companies like this.

Conn's core customers are simply not able to support its business. When forced to prioritize their bills, paying Conn's back for appliances, furniture, and electronics is close to the bottom of their list.

Like other subprime lenders, Conn's is cornered. It has to choose between two bad alternatives:

It's either falling sales or higher loan losses.

Subprime lenders like Conn's are in a no-win situation. And it's only a matter of time before their customers can't pay back their loans in large numbers... and one company after another blows up.

Editor's note: Bill recently closed his recommended trade on Conn's for a 119% gain, just as volatility struck the markets. It's thanks to a unique "portfolio insurance" strategy... And on Thursday, March 19 at 8 p.m. Eastern time, we're hosting an emergency briefing online to show you how it can help you protect your wealth in times of crisis. Learn how to tune in here.

No one loves a market sell-off. But when the dust clears, it can lead to bargain-hunting opportunities in solid income investments... Read more here: A Lesson in Income Investing at the Grocery Store.

"They say it's better to be lucky than good," Whitney Tilson writes. But if you want your portfolio to outperform, you need to know how to avoid these crucial mistakes... Get the full story here: Your Best Advantage Over the Professional Money Managers.

As longtime readers know, Stansberry Research founder Porter Stansberry has often warned investors away from overly indebted companies. These are companies that would struggle to pay off their debts even in the best of times… and as the past few weeks have shown, bad times can always be around the corner. This company is one of our favorite examples…

General Electric (GE) has historically enjoyed top-tier status as a solid American blue-chip company, and its market cap is still about $65 billion. But as Porter’s research has shown, GE spent years monkeying with its earnings figures… and it can’t keep hiding its mountain of debt. The company has chipped away at the total, but it still owes more than $94 billion – equivalent to nearly all the company’s 2019 sales.

GE shares have collapsed as the market came to grips with its shaky finances… The stock is now worth just a quarter of its 2017 value. But especially when trouble strikes, companies with this much debt can still fall much further… 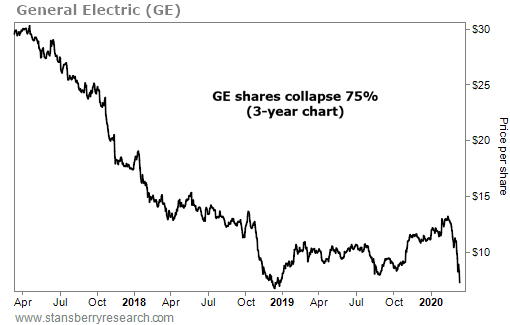