Your Best Advantage Over the Professional Money Managers
By Whitney Tilson
Friday, April 26, 2019

In the past two decades, I have learned some valuable investing lessons...

As some of you know, my journey to launch Empire Financial Research has been unique. In late 1998, I raised $1 million to launch my own hedge fund... without any formal training.

They say it's better to be lucky than good. I'd like to think I was a little of both. Over the next dozen years, I grew assets under management to $200 million, nearly tripling my investors' money in a flat market.

Toward the end, though, I made some key mistakes. I worried about another downturn, so I was too conservative with my portfolio... I took profits too quickly, held too much cash, and shorted too many stocks.

These kinds of missteps are incredibly common, but they destroy your profits over time. That's why I started Empire Financial Research – to share the lessons I've learned over the past few decades on Wall Street with individual investors like you.

So today, without further ado, I'm going to show you the four steps that individual investors can take to beat the market over the long run – including one that can help put you ahead of the pros...

The first step is the most important, and one that will sound familiar to longtime DailyWealth readers: effective portfolio management.

It was only through hard experience that I came to learn that stock-picking is only half the battle. The other 50% of investing is managing your portfolio, which can create or destroy as much value as the stocks you own.

To borrow a baseball analogy, your batting average matters a lot less than your slugging percentage. It's not how many of your picks are right... it's how much money you make when you're right versus how much you lose when you're wrong.

If you're sitting on a big winner that runs up 50% or 100%, trimming your position can stunt your returns tremendously. The opposite is true, too. When you hang on to your losers way too long – or worse yet, average down on your position – your losses can mount quickly.

It's critical to have the judgment, humility, and fortitude (which come from experience) to know when to let your winners run and cut your losses.

In October 2012, I had nearly 5% of my portfolio in video-streaming company Netflix (NFLX), right at its multiyear lows. And then it took off, becoming one of the greatest stocks of all time. But even though I had publicly predicted almost exactly what would happen, I only made about a tenth of what I should have – about $10 million on what could have been a $100 million winner. As the stock moved up, I kept selling and eventually exited far too early.

Had I simply gone away on a five-year vacation, I would have done far, far better – the stock is up almost 50 times since then!

It's also critical to give your investments enough time to let your thesis play out.

One of the biggest advantages individual investors have over professional money managers is the lack of short-term performance pressure.

Even the people who manage endowments and pension funds – which by definition have multidecade investing horizons – are evaluated on a short-term basis, sometimes even monthly. But sometimes, stocks can remain cheap for years before the tide turns.

It reminds me of something investing legend Warren Buffett once said...

All I want to do is hand in a scorecard when I come off the golf course. I don't want you following me around and watching me shank a three-iron on this hole and leave a putt short on the next one.

Meanwhile, 99% of the money in the world is managed by people who feel someone looking over their shoulders, ready to scold them for any mistake.

Sometimes stocks are cheap because they have no short-term catalyst to push shares higher. This means that they can languish for a while... But I don't try to anticipate when other investors' sentiment will change. It's not the end of the world if a cheap stock remains depressed for a while... as long as you have an appropriate investing horizon.

I'd argue the only money you should be investing in the stock market is money you don't need for three to five years. That sort of time frame gives you the patience to wait for high-quality stocks to go "on sale" and for your cheap stocks to start to move (assuming you're right that they're cheap!).

Next up is another core tenet of value investing: buying when the odds are in your favor.

Imagine you're driving a big truck over a bridge with a lot of other trucks on it that weigh a collective 49 tons. How would you feel if the bridge were engineered to hold only 50 tons?

When it comes to important things that your life – or financial future – depend on, you want to give yourself plenty of room to be wrong. Ideally, you want to consistently buy stocks where if you're right, you double your money (or more) in two to five years, and if you're wrong, you only lose a little.

That brings me to the last way you can put yourself in the position to beat the market: concentrating your portfolio in your best ideas.

Over the last half-century, a handful of folks figured out that Buffett is an investing genius, so they put their entire net worth into his holding company, Berkshire Hathaway (BRK). That has obviously worked out well for them, but I highly recommend against such extreme concentration.

I think most investors should own somewhere between 10 and 20 stocks. This provides reasonable diversification, yet also allows you to concentrate on your best ideas.

These days, it's becoming harder and harder to find stocks that the market has badly mispriced and undervalued... especially a decade into a complacent bull market like the one we're in today.

The idea that any one investor can have real, proprietary insights – what I call "variant perceptions" – across dozens of stocks is hard to imagine. But by focusing on a handful of situations where you have an edge over the market, you're likely to do far better than you would by owning dozens of stocks.

Editor's note: After a career nailing big market moves on Wall Street, Whitney is doing something most hedge-fund managers never do... Last week, he sat down to discuss the powerful strategy he used to grow his hedge fund from $1 million to $200 million – and how this approach could help you make huge investment gains, starting this year. Watch a free replay of the event before it goes offline right here.

As Whitney says, he has learned some valuable investing lessons over nearly two decades of managing multiple hedge funds and mutual funds. Learn three more of his important tips here: Want to Beat the Market? Do These Three Things.

"For most of my time on Wall Street, I was an old-school value investor," Whitney writes. "But recently, I've changed – and improved – my approach to investing and how I pick stocks." Read more about his strategy here: How I Went From Being a Classic Value Investor to a 'Make Money' Investor.

Today, another manufacturing giant tells us the economy is strong…

As regular readers know, we like to use various sectors as economic bellwethers. When robotic vacuum cleaners and ski resorts are popular, we see that consumers feel financially comfortable. Similarly, if industrial manufacturers are racking up sales, it’s a clue that the gears of economic production are turning. Today’s company is an example of the latter trend…

Honeywell (HON) is a massive $125 billion conglomerate that supplies multiple industries, including manufacturing, aerospace, health care, and oil and gas production. In the most recent quarter, Honeywell enjoyed sales of nearly $9 billion and better-than-expected earnings. Best of all, organic revenue jumped in all four of the company’s business segments… a positive sign for the broader economy.

As today’s chart shows, HON shares have been on a tear… They’ve nearly doubled over the past five years, and they recently hit a new all-time high. As major businesses buy from suppliers like Honeywell, it’s a sign the economy is still thriving today… 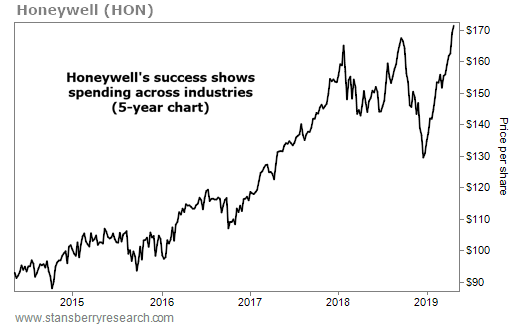