Hands Down, the Best Way to Make a Fortune in the Stock Market
By Dan Ferris
Thursday, March 7, 2019

Yesterday, I told you that we are on the cusp of a major shift in the markets... where value is getting ready to take the lead over growth for the next five to 10 years.

I also said this shift could happen sooner than you think. I believe we are approaching a major blow-off top... likely within the next several months.

But you ought to know something else about value investing...

You need to start doing it BEFORE the bull market ends.

Investing legend Warren Buffett gave a speech in 1984 called, "The Superinvestors of Graham-and-Doddsville." It chronicles the record of investors who worked for and learned from Benjamin Graham, the father of value investing.

Buffett related the records of five more "Graham-and-Doddsville" value investors. Not all of them outperformed in 1974, but they all trounced the overall market by a wide margin over periods of more than a decade.

A more recent study by Bank of America Merrill Lynch looked at the 90 years between 1926 to 2016, using another value/growth data set by economists Eugene Fama and Kenneth French. The cheapest stocks made 17% per year, while the most expensive growth stocks made just 12.8% per year – a huge difference when compounded over the long term.

Importantly, the data on growth versus value during bad times is mixed...

As the Wall Street Journal reported in July...

In bear markets before 1970, for example, the 50% of stocks nearest the growth end of the spectrum outperformed the 50% at the value end by an annualized average of 3.8 percentage points.

In the bear markets of the subsequent four decades, however, it was just the opposite, with value beating growth by an annualized average of 10.7 percentage points.

The current decade appears to be reverting to the pre-1970 pattern, with value lagging behind growth in both the 2011 and 2015-16 bear markets.

Again... I believe we're on the cusp of a huge shift back to the outperformance of value during the next bear market. It's worth pointing out that value beat growth by an astounding 32% annualized from the dot-com top in early 2000 to the bottom in October 2002. The current market environment smells a lot like that period to me, even if it is just one data point.

So, that being the case, I would submit to you the following...

History suggests that value investing is about to shine brighter than it has in nearly two decades. It has never underperformed growth investing for this long... So it's like a giant rubber band that has been stretched further than ever before.

The market is telling us that a much bigger shift between growth and value is likely in the next few years...

And that's why you should get in this mindset now. Value investing naturally prepares you for bad times by discouraging you from buying what's popular and expensive. It encourages patience and discipline – exactly what's been lacking in the market for most of the past decade. You can't predict bear markets, but you can prepare for them by being a value investor.

My chief research officer Mike Barrett and I have that kind of discipline. And recently, we've found great value in a handful of different industries...

In the past several months, we've recommended a pipeline company, an old chemical company, and a shipping company – classic Graham value stocks.

We waited more than a year to recommend one stock – until it finally got cheap enough for our liking. We recommended shares in August, and it's already up 39%. We think it'll double over the next few years.

And with gold cheap relative to stocks, we continue to recommend investing in the best business in the global mining space, bar none...

It owns a royalty-like income stream on millions of ounces of gold, silver, platinum, and palladium above the ground.

You won't find a better business model in the gold mining space. And you won't find better downside protection, bigger (realistic) upside, or a better management team. This stock is trading at cheap cyclical lows and is ready to roar over the next five to 10 years. I believe the shift to value will send it up 10 to 20 times current levels as it continues to pay rising dividend streams.

I can't predict the future, and I have yet to meet anyone who could. But I've closely studied the past and the present, and I know two things for sure: where we stand and what to do about it.

Value investing is hands down the best way to make a fortune in the stock market.

If you hope to outperform over the long term, this is an ideal time to own stellar businesses at reasonable prices... before this shift changes everything you thought you knew about making money in the markets.

Editor's note: Dan believes this royalty-like gold business could be the difference between losing everything and retiring in comfort as the shift to value plays out. "It's the single best opportunity I've ever found," he says... To learn more about how this stock could return 20 times your money over the long haul, click here.

"You can find this kind of key metric in every industry – if you know where to look," Dan says. Knowing this simple detail is crucial for finding great deals on the best stocks... Learn more right here.

"This strategy gets more powerful the earlier you begin," Mike Barrett writes. "But if you have some catching up to do, chances are it's not too late to start compounding your wealth." Learn about another strategy in his and Dan's Extreme Value arsenal right here: How to Earn Loan Shark-Like Yields in the Stock Market.

Today’s chart tells us times are good in the U.S…

As longtime readers know, we like to check many economic bellwethers here in DailyWealth. Ski resorts, payroll services, and home-improvement stores might be very different businesses, but they all tell us when Americans are earning and spending money. Today, we see another sign of prosperity from an unlikely source…

iRobot (IRBT) makes Roomba robotic vacuum cleaners and other household robotic devices. When you buy a Roomba to automatically clean your floors, it means that your time is too valuable to spend pushing a vacuum. Considering the latest Roomba I7+ costs up to $1,100, that’s pretty darn valuable (even if it can empty its own dustbin). But consumers are buying… iRobot recently reported record sales of $1.1 billion for 2018 – up 24% from the year before.

As you can see, IRBT shares are soaring… They’re up about 80% over the past year, recently hitting a new all-time high. When Americans have money to burn on pricey time-saving products, it’s a good sign for the economy… 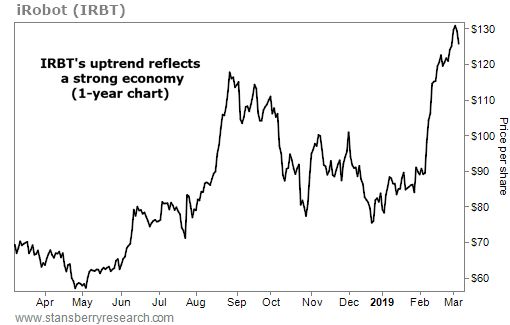