I first wrote about the potential for a stock market Melt Up in 2015. And since then, this setup has never been clearer than it is today.

The stock market Melt Up is here – and so is the euphoria that goes along with it.

If you've been watching the markets, I'm guessing you can feel it. Sentiment is as much a feeling as it is a tangible thing. But there's plenty of hard evidence to back it up, too.

Today, I'll share the signs of what's happening... and more important, what it means for your money now.

Proof of the Melt Up is everywhere today. The first obvious clue is the initial public offering ("IPO") market.

Companies tend to come to market when times are good... or more specifically, when valuations are high. 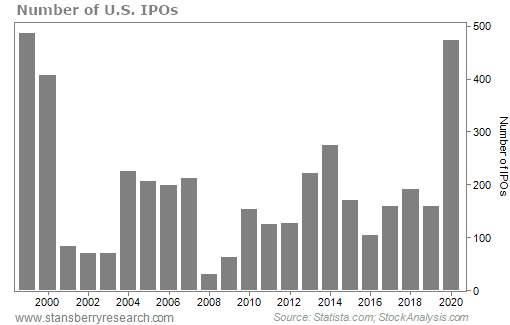 IPOs were a major theme of the tech bubble. Hundreds of companies went public because money was flowing and times were good.

Many of those stocks would soar triple digits on their opening day. And the same thing is happening today in many high-profile IPOs.

Last month, DoorDash (DASH) and Airbnb (ABNB) both went public. These companies each used a special "hybrid auction" to allocate shares to investors. The idea was to have investors bid a price in the hopes that the actual IPO price would come close to the true market value at launch.

If it worked, we wouldn't have seen these stocks soar on their opening days... But it didn't work.

Instead, DoorDash soared 86% when it began trading. Airbnb jumped 115%. Those are high opening-day moves in massive businesses. The companies have market caps of $45 billion and $88 billion, respectively.

More important, when you put this in context with the above chart – with total IPOs surpassing 2000 levels – the point is clear. IPO euphoria is taking off in the market today. And that's Melt Up behavior at its purest.

IPOs are just part of the story, though. According to Citigroup, overall euphoria is at its highest level since the early 2000s.

That's according to the company's Panic/Euphoria Composite Index, which looks at factors like margin debt and options trading. It shows dramatically higher euphoria than we ever saw during the 11-year bull market. And it's nearing 20-year highs, too.

It surveys a few hundred money managers to get their take on the markets each month. These professional money managers are now underweight cash for the first time since 2013. And that makes sense given what's going on.

Stocks are soaring. Times are good. And that makes cash a dead weight in your portfolio. So even though cash serves a purpose, the pros have ditched it.

I'm not kidding when I say stocks are soaring, either...

Again, the takeaway from all of this is clear...

That's not a bad thing. It's exactly what we expected when the Melt Up began to take hold. But let's not kid ourselves... This is a dangerous time to be an investor.

It's dangerous because while times are good now, we know what happens next. After a furious Melt Up comes a crushing Melt Down.

Tomorrow, I'll share how you can protect yourself from that looming risk.

P.S. I've also always said that I'd help you prepare for the Melt Down when the time came. Today, I'm making good on that promise. If you want to know how I've determined the exact moment when I'll sell my stocks, I recently filmed an interview in my living room to share the details... including the most important thing you can do to protect your wealth in 2021. You can view it right here.

"The Dow Jones Industrial Average just set a new record," Chris Igou writes. "Dow 40,000 could be the next stop." It pays to buy after new highs. Find out what's possible after today's blistering rally right here.

"The trend is up, and the Melt Up is on," Steve says. "But we have to be ready for the red that will eventually follow." We saw the perfect example of this during the dot-com era boom (and bust)... Read more here: Our Lesson From Two Unsung Heroes of the Last Melt Up.

Today, we’re taking a look at one of Steve’s favorite tech trends…

Regular readers know that America is well on its way to going cashless. As of 2019, cash made up just 26% of total transactions in the U.S. And this trend has only accelerated due to COVID-19, as people opt out of cash for safer and more sanitary options. That’s great news for today’s company…

Global Payments (GPN) is a leader in digital-payment software and technology. Its products allow merchants to accept a wide range of payments… from credit and debit cards to mobile wallets like Apple Pay and Google Pay. Global Payments even offers software that allows employers to manage things like employee scheduling, payroll, and tax filings. This array of digital services is paying off today… The company brought in total sales of $1.9 billion in the latest quarter – up an incredible 73% year over year.

As you can see in today’s chart, GPN is up roughly 80% from its mid-March low and recently reached a new all-time high. This is just more proof that the digital-payments trend is here to stay… 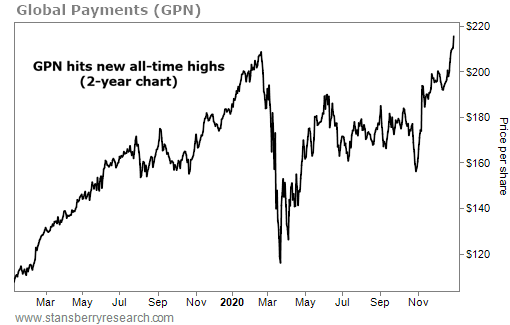