Meme-Stock Investors Are in Love With a New Dud
By Sean Michael Cummings
Monday, July 11, 2022

The retailer's shares were heavily shorted. Lots of folks were betting against the company.

This setup caught the attention of the infamous Reddit trading forum WallStreetBets. Users of the forum bid up BBBY in a big way... And the bearish investors were forced to unwind their short positions by buying shares, fast.

It was a textbook "short squeeze." The stock surged 112% in a week.

But the fun didn't last. The retailer's shares have plunged 90% from their peak. Reportedly, its stores can't even afford air conditioning.

Bed Bath & Beyond should be a cautionary tale. Investing in meme stocks might be exciting... But it's not a successful long-term strategy.

Today, investors are hoping they'll see a historic meme-stock rally repeat itself. But they're about to be disappointed. Because their new favorite isn't the winner they're looking for...

You might think the first meme stock was GameStop (GME). But actually, it was Hertz (HTZ)...

Two years ago, the car renter's business was in shambles. COVID-19 had crushed demand, and it was unclear if the business would ever recover.

So Hertz filed for bankruptcy in May 2020.

When companies go bankrupt, they prioritize paying back bondholders and other creditors. Shareholders are the last in line to get paid back... They usually lose everything.

But the meme crowd swooped in anyway. In the two weeks after Hertz filed Chapter 11, its stock surged nearly 900% as retail traders snapped it up.

Shockingly, their gamble paid off. Private equity stepped in and rescued Hertz the following year. And shareholders earned a tidy 28% in the buyout.

It was a once-in-a-lifetime event. But that hasn't stopped meme traders from trying to duplicate it.

Today, social media is fueling a new boom in another sector – cosmetics. And makeup major Revlon (REV) can't keep up with the competition.

Shares should have crashed on the news. But over the next three trading days, WallStreetBets buzz drove a new meme-stock mania. And Revlon shares soared 300%... 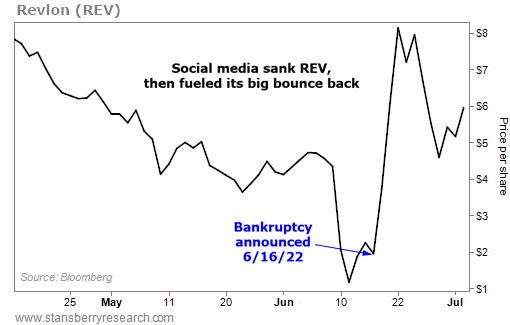 Looks fun, I know. But if these traders expect Revlon to be the next Hertz, they have another thing coming...

You see, Hertz's bankruptcy was tied to a unique accounting practice. Before 2020, the company had secured debt using its car fleet as collateral.

But creditors didn't want to be on the hook if those used cars lost their value. They made sure that if the fleet depreciated beyond normal wear-and-tear, Hertz would have to pay back the difference.

When COVID struck, Hertz was hit with a double-whammy. Airline customers were no longer renting cars... but also, the value of its fleet collapsed.

When used-car prices soared as COVID lockdowns eased, the reversal for Hertz was dramatic. It was a big reason why Hertz was able to treat shareholders so well after bankruptcy.

You can see it in the chart below. This index shows the wild rally in used-car prices over the past couple of years... 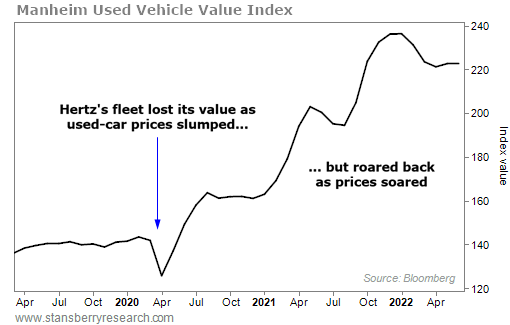 Again, this was a once-in-a-lifetime event... Revlon can't repeat it. There's no reason why makeup should have the dramatic turnaround we saw in used cars.

Plus, as of late April, Revlon had $1.4 billion more debt than assets. Closing that gap would take a huge surge in demand for Revlon's products.

Meme traders might get lucky and profit as other traders bid up the asset. But if they get their timing wrong, they could get stuck holding shares of a dying company.

This is the problem with meme-stock investing. It's fun – when it works. But the fun rarely lasts...

And this time, investors looking to rake in cash on the next Hertz are going to have a Bed Bath & Beyond on their hands.

"There is easy money to be made when the person you are betting against has no idea what he is doing," Jeff Havenstein says. We're seeing plenty of inexperienced investors in the market right now who are blindly chasing profits. But it's critical to remind yourself to avoid the pitfalls of fast money... Learn more here.

"Holdout investors are looking for lightning to strike the same place twice," Sean writes. Robinhood allowed a new generation of traders to enter the market. And those who capitalized on the meme-stock craze earned a quick payout. But folks shouldn't expect that cycle to repeat... Read more here.