My Dad's Great Buy in the Housing Bust
By Chris Igou
Thursday, December 12, 2019

"She couldn't see the opportunity!" my dad recalled again over Thanksgiving break...

He knew the real estate agent missed something. And he was downright giddy about it.

I've seen this type of excitement from my dad before. He loves to tell stories about the great deals he's found where nobody expected it...

In 1984, he took a chance on a river property in southern Georgia. A little more than a decade later, he sold it for a gain of nearly 160%.

But during the housing bust a decade ago, he found another opportunity he couldn't pass up...

My dad was in southwestern North Carolina, just a 10-minute drive from Lake Lure. (As my mom likes to remind us, Lake Lure "is where they filmed Dirty Dancing with Patrick Swayze.")

He was meeting with a real estate agent, looking at deeply discounted properties. At the time, folks needed cash. And with no one to sell to, property owners had to dramatically slash their asking prices.

Standing in an open lot, my dad knew he wanted to buy. He saw the hidden value in the overgrown mountain property – value that wasn't as clear to the real estate agent...

"You don't want this one," she said. "You'll never get a great view from this property."

He didn't see it that way.

You see, the asking price of this property was as high as $279,000 during the real estate boom.

"With just a little clearing on one side of the property, you had a beautiful view of a nearby hollow," he told me over the holiday...

He was right. Here's the view after my dad cleared it... 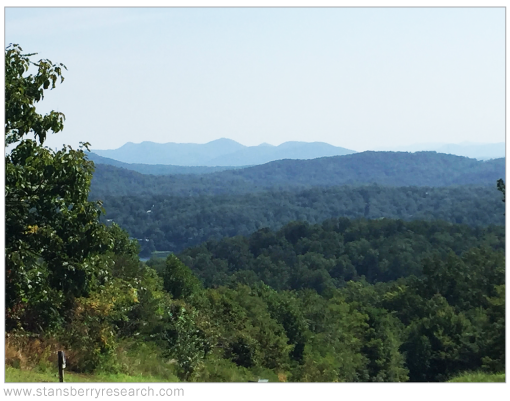 They continue to hold on to the property today. Its value has gone up – a lot. The most recent appraisal put it at $72,000... more than double what my parents paid for it.

I wouldn't be surprised if you heard a similar story over the Thanksgiving holiday. Or if you told that type of story to your family and friends at the dinner table.

That's because the real estate market is booming right now... We're a long way from the depths of the housing crisis roughly a decade ago.

Finding deals like my dad's might not be as easy as it was back then. But the thing is, even though real estate prices have soared, there's still plenty of upside left in housing.

One simple reason is that homebuilders are only now catching up to demand. Once the housing crisis began, homebuilders stopped building. There was a massive oversupply of homes... Yet nobody was able to buy.

In 2009, housing permits for new homes hit their lowest level on record, based on data going back to 1960. And of course, the housing market suffered.

Ten years later, demand for housing is back. And homebuilders are finally catching up...

You see, applications for new building permits are at a 12-year high today. That might sound like a rally before the peak – but a steady climb in permits is normal during a recovery. It's what you'd expect as folks start buying real estate again.

Before the housing boom ends, we'll likely see building permits near record highs again. But simply put, we're not there yet. Take a look... 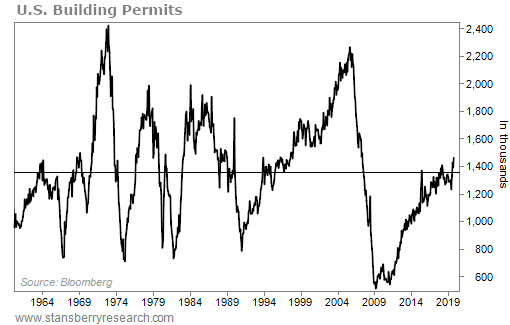 As you can see, the roughly 60-year average sits around 1.35 million. Today's levels are only slightly higher at 1.45 million... And we're well below the previous peaks.

Permits have rebounded sharply during the housing bull market in recent years.

That's exactly what you'd expect. But as you can see in the previous chart, we aren't anywhere near the peak levels that we've seen during previous tops in real estate.

There's still plenty of demand for housing in the U.S. And building permits will continue to rise to meet demand. Ultimately, this is good news for housing prices for now.

Charts like the one above tell us the housing boom is maturing. That means the deals like my dad found a decade ago are few and far between today.

It doesn't tell us to expect a crash soon, though. The housing market is still healthy. And it'll likely be years before this boom ends.

"The median existing home price in the U.S. is about $289,000 today," Steve writes. "That's an all-time high." But even with housing prices at historic highs, there may be no better time to buy... Read more here.

"The number of existing homes on the market is historically low today," Steve says. But supply is only one aspect of the housing market. With mortgage rates falling, this creates an interesting scenario... Learn more here.

Market Notes
THIS CHIPMAKER IS RIDING THE POWERFUL VOICE-TECHNOLOGY TREND

Our digital world simply couldn’t exist without the little semiconductor chips powering our gadgets day in and day out. As life becomes more and more digitalized, we’re starting to be able to “talk to” pretty much any device. And today’s company supplies the chips that keep this voice technology working…

Cirrus Logic (CRUS) is a leading provider of audio components and software. That means you can find its chips and technology in everything from smartphones, to tablets, to AirPods… delivering high-quality sound and helping folks control their smart devices. And as our world increasingly relies on technology, this company rakes in the profits. Last quarter, Cirrus blew away Wall Street earnings expectations with $389 million in revenue and non-GAAP earnings per share of $1.55.

As you can see, CRUS shares have roughly doubled over the past year alone… And they recently hit an all-time high. As we increasingly turn to voice technology in our everyday lives, this trend should continue… 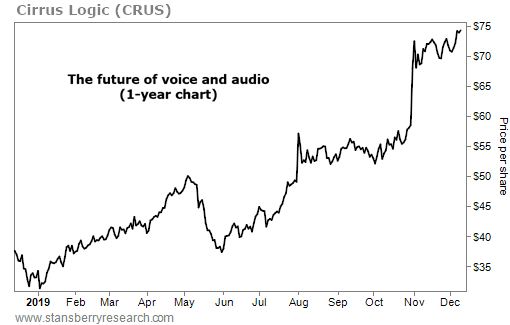