Well, the first week of trading in May is in the books... So what did you do?

There's an investing adage that you probably have heard: "Sell in May and go away."

Besides being a clever little rhyme, the adage would have been good advice during some periods in history. Even today, the six-month period between November and April tends to be the strongest for stocks.

But go to cash for the next six months?

Especially not right now, when we stand on the threshold of both an economic and stock market boom... the likes of which we haven't seen in decades.

The idea of selling your stocks just because the calendar says May 1 – or any date, for that matter – doesn't make sense. Sure, there are seasonal patterns in the market, but they should not be your primary investing strategy.

Plus... it just doesn't work the way it used to.

Think back to last year. By the end of April, the S&P 500 Index had bounced an incredible 30% from its March 23 low. If you had sold at that point, you would have missed another 12% run in the market – and more in many individual stocks – over the following six months.

That's more than an entire year's worth of gains on average.

What's more, when you tried to invest again in November, you would have paid more than what you sold for in May.

Ryan Detrick at LPL Financial put out some great information recently. His data shows that the S&P 500 has averaged 3.8% gains from May to October over the last 10 years... and was positive eight times out of 10.

You get the picture. Selling in May doesn't make sense as a general rule.

And it really doesn't make sense this year.

Everything points to an economic and investing boom in the year ahead. And that's why my biggest plea to investors is this...

Now is the time to be invested in stocks, not selling and going away.

COVID-19 vaccines are being widely distributed. Restrictions are beginning to ease. We are getting ready to go out and live our lives again. And the government could still decide to shell out more in stimulus.

In short, we have an economy that is reopening and primed for recovery.

I believe we're about to witness one of the biggest stock booms in U.S. history... and that carefully selected, high-quality stocks can go up 300%, 500%, and even 1,000% over the next few years.

The last time we saw something similar was in the early '90s. Like today, that was also a time of low inflation and incredible innovation...

The rollouts of cellular phone networks and powerful personal computers and the advent of software and the Internet converged to unleash a tsunami of productivity. In a relatively short time frame, our ability to communicate, transact, process data, analyze data, and manage supply chains was revolutionized.

The new technologies of the 1990s gave a huge shot of adrenaline to the economy. And they paved the way for truly innovative companies to hand their shareholders incredible returns. Stocks like Cisco Systems (CSCO) went up 113,000%. Take a look... 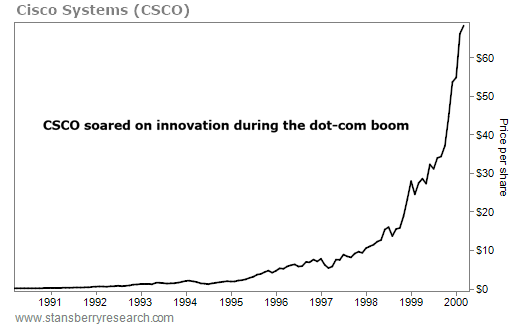 A similar story is unfolding now. Not only are we seeing the first signs of an economic recovery, but we're also about to see several once-in-a-generation technologies come together at the same time...

These will totally reshape every aspect of our lives. I'm talking about artificial intelligence, 5G, precision medicine, the Internet of Things, driverless cars, the blockchain, and more.

And the impact these technologies will have on the global economy will dwarf the dawn of the Internet.

It's an incredibly exciting time to invest. With a return to normal now in sight, a technological and economic boom is set to kick off in a meaningful way. That's why I believe 2021 will be one of the greatest years to be an investor.

And it's why smart investors need to be in the best hypergrowth stocks for the coming 12 months.

Editor's note: Over his career, Matt has recommended 120 different stocks that have more than doubled... and 22 different stocks that could have each made you 10 times your money or more. Now, he's sharing a must-see briefing on an innovative breakthrough that could change the future of medicine... and help you make the biggest potential gains of 2021. Get the full story here.

With interest rates extremely low, stocks are the best place for your money today. And with the upside potential in the technology sector right now, there has never been a better time to own this type of stock... Get the full story here.

"Stocks often have their biggest and most explosive gains at the end of a major bull market," Steve writes. That's why owning stocks is more lucrative under today's conditions than almost any other time... Read more here: The Final Surge Is Here.

Market Notes
THIS FAD STOCK HAS LOST ITS MAGIC

Today, we’re reminded of the dangers of buying into “fad stocks“…

Regular readers know that when everyone is talking about an exciting new stock, it’s usually time to take a step back. Once speculators have crowded into a stock, eventually there’s no one left to buy – and that means there’s nowhere for shares to go but down. Take this struggling food company…

Beyond Meat (BYND) is one of the most popular plant-based-meat producers in the U.S. Investors thought Beyond Meat’s unusually convincing meat imitations would grab a huge share of the global food market. Turns out, though, most folks are sticking with animal meat… And other plant-based competitors have proven formidable, too. In the most recent quarter, Beyond Meat lost $27 million – worse than Wall Street expected.

When the company went public in 2019, BYND shares rocketed more than 850% in just three months. Since then, they’ve fallen more than 50%. It can be tempting to join the crowd as a fad stock soars, but these gains don’t often last for long… 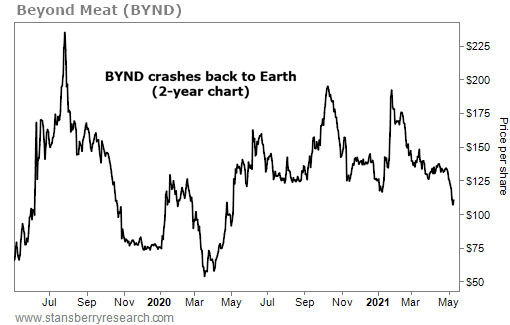