I've been writing about the Melt Up for years.

It's a simple but powerful idea... that stocks often have their biggest and most explosive gains at the end of a major bull market.

In short, before the big "Melt Down" arrives, we have the big Melt Up. It's the final push higher before the bear market kicks in.

There's actually more to this story though... Because something interesting happens at the end of a Melt Up.

I call it the Final Surge. And it's starting right now.

The Final Surge is a "boom within a boom"...

It's the last six to nine months of a Melt Up... when rationality truly goes out the window and millions of Americans make their final rush into the markets.

This is a moment when greed, speculation, and euphoria rule the day. And it can send stocks soaring higher than you might believe possible.

That might sound crazy. But it's true. The Final Surge is where the biggest Melt Up gains come from.

To see what I mean, take a look at the chart below. It shows the entirety of the dot-com era Melt Up... 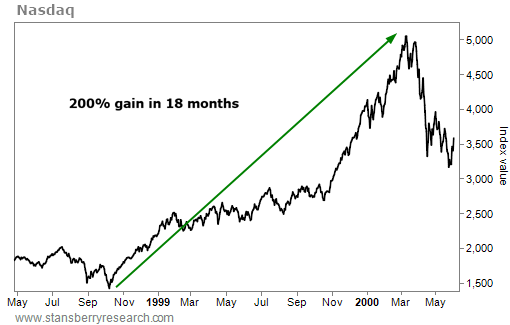 That was the Final Surge of the dot-com-era Melt Up. And it led to 88% gains in just five months. Take a look... 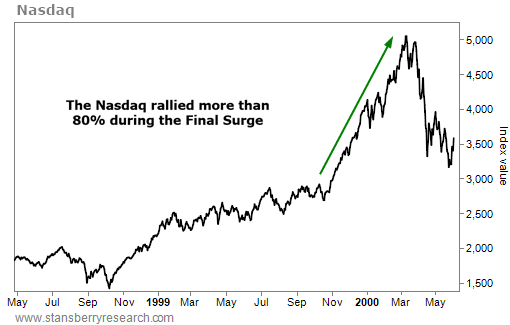 That, my friend, in the Final Surge. It's the final boom of a Melt Up. It happens fast. But it's when you can make the biggest gains possible.

The Melt Up is in place right now. And I believe we've entered the Final Surge, too.

I've explained many of the reasons in recent DailyWealth essays. Stock market euphoria is gripping the markets... And speculators have taken over stocks in a way I haven't seen since the dot-com mania.

We're living in crazy market conditions. The Federal Reserve is pumping money into the system, and the government is spending like we've never seen before.

That's pushing regular folks into the investment world – many of them for the first time. And they're seeing it as a casino, not a place to grow long-term wealth.

This isn't a good thing in the long term. But in the short term, it can fuel an incredible boom... the Final Surge of the great Melt Up that's underway.

These are dangerous times. But acting now, and investing while you can, could mean some of the biggest and quickest gains you'll ever see.

So please, be cautious. Understand that you're playing with fire. But don't miss this opportunity. It likely won't come along again for a long time.

P.S. These incredible market conditions are why I hosted a Melt Up event last month. I shared everything you need to know about the Final Surge. And I unveiled the best way I know of to take advantage of what's happening – a portfolio of 13 recommendations positioned to profit the most. If you're interested, you need to check it out today... because the presentation is going offline TONIGHT. To get the full details, click here.

Speculative markets can run much higher than you think. And even though the markets are sure to be volatile in this last leg of the Melt Up, we're seeing the perfect setup for explosive gains. Make sure you don't miss out... Read more here: The Stars Are Aligning for a Massive Boom.

Everyone is ready to get back to their normal lives after a year of lockdown. We could soon see a booming U.S. economy. And that means we want to own U.S. stocks today... Get the full story here: The Booming Economy Is a Good Sign for Stocks.