One of Steve's Favorite Companies Continues to Shatter Expectations
By Justin Brill
Saturday, May 19, 2018

On the plus side, all three indexes – the Dow Jones Industrial Average, the S&P 500, and the tech-heavy Nasdaq Composite – remain above their February "volatility panic" lows. All three are also still trading above their respective 200-day moving averages ("DMA").

In addition, the benchmark S&P 500 has now broken out above a critical "triangle" chart pattern that had formed late last month. This is a positive development, but we may not be "out of the woods" just yet. Without getting too technical, traders would typically expect to see stocks explode higher out of this type of pattern. That hasn't been the case so far.

Of course, this doesn't mean stocks can't (or won't) continue higher from here. But we can't rule out another move lower in the near term... And we'd prefer to see the market recapture its March highs – about 2,800 in the S&P 500 – before getting too bullish again.

In the meantime, we're seeing some pockets of relative strength...

One of the most notable is small-cap stocks... In fact, while the major indexes are still well below their January highs, the small-cap Russell 2000 Index just made a new all-time high... 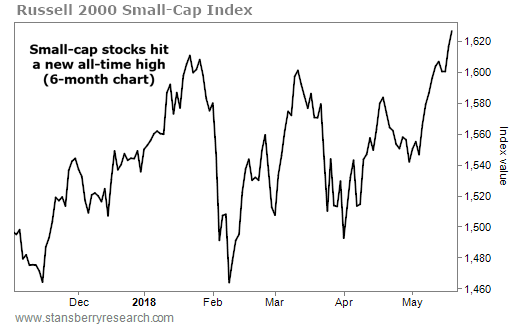 These companies – which tend to operate solely in the U.S. – are likely benefiting from a combination of the recent tax cuts, relative U.S. economic strength, and rising fears of a "trade war." As the Wall Street Journal reported this week...

In recent weeks, data have suggested that momentum around the world could be faltering... The comparatively rosier outlook for the U.S. has drummed up fresh optimism among investors in small caps – especially with many expecting small companies, which tend to pay higher effective tax rates than multinationals, to get a boost from corporate tax cuts...

Smaller publicly traded companies broke away from the broader market in March and pushed higher, even as bouts of volatility related to fears of protectionist trade policies and missteps by technology companies caused the S&P 500 to slide.

One reason why small caps withstood the turmoil: Investors have bet that continuing skirmishes over trade policy between the U.S. and China, among other nations, are less likely to dent profits among domestic firms. The S&P 500 gets about 30% of its revenue from outside the U.S., compared with 21% for the Russell 2000, according to a Bank of America Merrill Lynch research note last month.

Investors looking for a low-risk opportunity for new money could consider buying a small-cap exchange-traded fund – such as the iShares Russell 2000 Fund (IWM) – with a tight stop below its previous highs.

As longtime DailyWealth readers know, Tencent is part of what Steve Sjuggerud has dubbed the "New China" economy – a dramatic technological revolution being led by a small group of homegrown Chinese companies.

It's one of his top recommendations... And as has often been the case of late, the company absolutely trounced expectations again this quarter.

Tencent reported that its revenue grew 48% during the first three months of the year to 73.5 billion yuan ($12.7 billion), versus estimates of 70.8 billion yuan. Meanwhile, net profit rose 61% to a record 23.3 billion yuan ($3.7 billion), nearly 30% higher than analysts expected.

The company has been investing heavily in growth, which many analysts expected to hurt profits. But that clearly wasn't the case. In fact, the company's gross profit margin actually rose to more than 50% in the quarter – its first year-over-year increase in nearly three years – versus estimates of 47%.

But the highlight of the report may have been Tencent's WeChat business...

It's already the most dominant digital "ecosystem" in China. But it continues to grow rapidly. In fact, WeChat's active monthly users rose 11% year over year in the quarter and crossed 1 billion for the first time.

Currently, WeChat's advertising revenue accounts for less than 20% of the company's total sales. But this percentage could expand significantly in coming years. As news service Bloomberg reported this week...

A momentous thing happened at Tencent Holdings last quarter. The details were buried in its 44-page earnings statement late Wednesday.

To cater to the strong demand for social advertising on our platforms, [WeChat] Moments increased its maximum ad load to two advertisements per user day in late March.

When two is an increase you know that the earlier number wasn't very high.

[WeChat] Moments is like a user's Facebook or Twitter feed, and the ubiquity of [WeChat] makes it a powerful tool for reaching consumers. But with great power comes... yadda, yadda.

In fact, Tencent has wielded that power with great discipline by not spamming feeds in order to avoid annoying consumers. Such a savvy strategy helped it keep attracting users while avoiding the negative feedback we often hear from users of Facebook or Twitter.

Even at just one ad per day in the Moments feed, Tencent's social media platform has climbed to account for almost 70% of ad revenue.

In other words, Tencent has only just begun to tap into the revenue-generating potential of its 1 billion and growing WeChat users. If the company were to expand its advertising efforts to even half that of Facebook – and despite the complaints and recent scandals, Facebook users continue to log in – sales could absolutely soar.

Of course, longtime readers also know the "New China" revolution isn't the only reason why Steve is super bullish on China today...

He has also been tracking an unusual shift in the global financial markets. This once-in-a-lifetime event is virtually guaranteed to cause hundreds of billions of dollars to flood into a specific group of Chinese stocks.

This dramatic shift is set to begin less than two weeks from today – on May 31, 2018 – and Steve has identified two stocks in particular that are set to soar when it does.

Steve just put the finishing touches on a presentation to explain this urgent opportunity in detail. Click here to read it now.

Editor's note: Starting on May 31 at 3:59 p.m., tens of billions of dollars will begin to flow into two little-known Chinese stocks. And investors who get their money in first could potentially double their money in the coming months. Steve recently released an urgent, brand-new presentation to help you prepare for this historic event. Get all the details here.