One Time You Shouldn't Follow the Trend
By Brett Eversole
Tuesday, April 26, 2022

There are a handful of sectors you should always keep an eye on... even if you're not invested in them.

That's because certain corners of the market expose the economy's inner workings. And when those areas struggle, it's often a sign of larger problems to come.

Transportation stocks have long been one of these classic bellwethers. These stocks benefit when goods are moving around. But they're also the first to feel the pain when economic activity slows down.

That's what we're seeing now. One of the main funds tracking the transportation sector recently hit a new 52-week low. Normally, we'd expect that to lead to further losses. But this is one time where you shouldn't stick with the trend...

Instead of a downturn, we can expect outperformance from transportation stocks. Now, this comes with one caveat, which I'll cover... But history shows we can expect double-digit upside from here.

Transportation stocks have a tendency to top out before major market peaks. It happened before the tech bubble burst... and again ahead of the global financial crisis.

Fortunately, this sector peaked alongside the S&P 500 Index earlier this year – not ahead of it. So I'm not writing to warn you of a coming crash.

Instead, we're simply looking at the new low in transportation stocks from a few weeks ago. (The overall market hasn't hit a similar low yet.)

The recent sell-off took less than two weeks and pushed shares to a new low. As trend-followers, that would normally be enough to keep us away from this sector.

But after digging into the data, an entirely different outcome emerged...

Unlike most corners of the market, transportation stocks have a history of outperforming after hitting a new 52-week low.

I ran the numbers on IYT's underlying index. Its data goes back more than two decades. Here are the results...

The transportation sector isn't "sexy"... But it's a consistent performer. These stocks have returned 9.4% in a typical year since the turn of the century.

Buying after a new low offers even bigger upside, though. Similar setups have led to 12.6% gains in six months and a 13.1% gain in a year. That's solid outperformance when you'd least expect it.

It's important to note one thing, though... Setups like this have only occurred seven other times. And while six of those extremes led to gains, one led to a negative return in 2007. In that case, transportation stocks fell 37% over the next year.

If you remove that loss, the typical one-year gain is 25%. So we can expect transportation stocks to either do very well or very poorly from here... And a positive gain is the more probable outcome.

Either way, a "boring" return isn't likely, based on history.

I still recommend you wait on the trend before putting money to work. But that's my own preference in investing. History suggests this is one time you can ignore the trend. The new low isn't something to fear... Instead, it's setting up big gains.

"It's a great time to be invested... because the turnaround may be just around the corner," Sean Michael Cummings says. Ongoing market volatility has led to immense pessimism among investors. But history shows this environment could point to further gains... Read more here: What You Can and Can't Learn From Animal Spirits.

"Now isn't the time to be scared," Chris Igou writes. The market is so full of uncertainty today that investors head for the exits at any sign of a decline. But if we let fear guide our decisions, we could miss out on big returns... Learn more here: Investor Fear Points to More Upside in Stocks.

Market Notes
THE BUBBLE HAS BURST FOR THIS E-COMMERCE COMPANY

During the height of the COVID-19 pandemic, many people were stuck at home. Folks couldn’t spend money on outings… So, they had more cash – and time – to improve their living spaces. Now, with much of the U.S. reopening, the home-renovation trend is slowing down. And today’s company is a casualty of this reversal…

Wayfair (W) is a $9 billion e-commerce company. It sells furniture and other home goods. With more than 22 million products listed online, it’s clear why Wayfair became a popular choice for housebound consumers looking to freshen up their surroundings. However, the company’s sales have faltered as inflation hits the country… and as consumers go back to spending money outside their homes. Wayfair’s fourth-quarter revenue declined 11.4%, and full-year 2021 revenue fell 3.1%.

As you can see, W shares hit a high in March 2021. They’ve fallen 75% since then and recently hit a new 52-week low. As society starts to return to normal, we’ll likely see more pullbacks in other “pandemic stocks”… 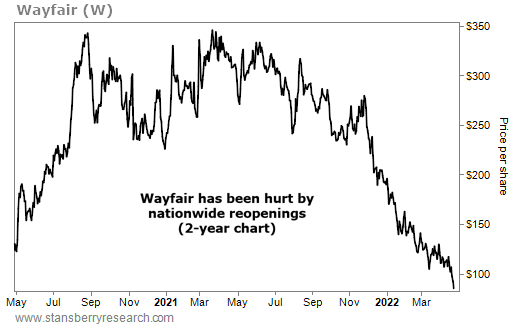