Mortgage rates are a key player in today's housing boom...

Low rates make it cheap for potential homebuyers to borrow money. And that’s a big reason why housing is still affordable today, despite the absolute tear we’ve seen in prices since the pandemic began.

That story has been true for years. But some investors are fearful that a surge in 30-year rates could put a damper on demand...

The average 30-year mortgage rate in the U.S. just hit a 52-week high. While that might seem like bad news, though, it's not something to worry about just yet.

The reality is that mortgage rates don’t behave like most assets. And that means it’s unlikely that higher rates will end the current housing boom.

Longtime readers know we lean heavily on trends. That's because following the trend works for most investments.

When prices get moving in one direction, that momentum tends to continue. So sticking with the trend often means stacking the odds in your favor... and limiting your downside risk in the process.

This idea works great for stocks, commodities, and currencies. And it might have you worried about the current trajectory of mortgage rates. But not everything in the market follows this rule.

Today, we're coming off a new 52-week high in mortgage rates. You can see the recent move higher in the chart below... 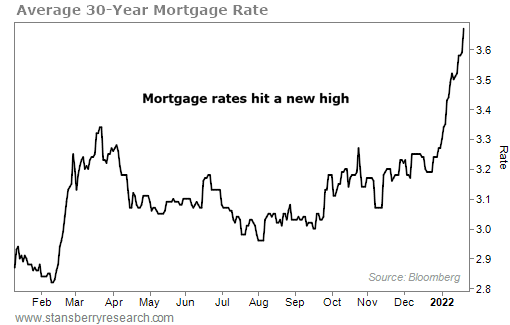 More important, interest rates, in general, aren’t the same as other investments. And mortgage rates, specifically, don’t work the same way as stocks when it comes to trends.

That means the recent rise won't necessarily continue. It's actually a toss-up as to where rates could go next, as the table below shows. Check it out...

A new 52-week high in mortgage rates isn't a key indicator that they'll continue climbing. In fact, similar setups have resulted in a 50-50 split in the following months... Half of the cases led to lower rates in the future.

So this is one situation where the trend isn't the most important factor. And that’s important to understand if you’re bullish on housing.

It means that rates might not keep rising. Plus, we're well below the historical average of 5%. So rates could continue higher from here and still be nowhere near historically high levels.

We'll keep a close eye on 30-year mortgage rates going forward. But there's no need to panic. The housing boom can continue... even at today’s mortgage-rate levels.

Throughout the pandemic, the real estate sector experienced a slew of unforeseen issues. We've seen supply-chain problems and building delays. But that doesn't mean the housing boom is ending any time soon... Read more here: Homebuilders Adapt to a Crazy Housing Market.

The financial media has been selling the fear that evictions could crash the housing market. But one of our favorite measures of the strength of U.S. housing shows us this fear is overblown... Get the full story here.