This 'Risk Off' Rally Is Running Out of Steam
By Ben Morris
Friday, January 21, 2022

We may have seen the start of a big reversal...

This reversal could be a good sign for the markets overall. But it triggered a sell signal for one "risk off" sector... consumer staples.

Recently, consumer-staples stocks have been among the market's top performers. The benchmark S&P 500 Index is up 1.3% since December 1... Yet the S&P 500 Consumer Staples Index is up nearly 10%.

Now, though, that rally could be running out of steam.

Today, we'll show you this sell signal. And we'll consider what it means – within this group of stocks, and in general.

Consumer staples are the stores and items that people rely on in their day-to-day lives. Think grocery stores, food companies, and the firms that make home goods like toilet paper, toothpaste, and trash bags. These are the "staples."

People go to these stores and buy these products no matter what's happening with the economy... So these companies don't experience the big swings in demand that a lot of other sectors of the economy do. Plus, because of their stability, these firms often pay regular, growing dividends to their shareholders.

This combination makes consumer staples a "risk off" sector – one into which investors tend to move money when the rest of the market looks dangerous.

And lately, the stock market has been a dangerous place. The S&P 500 Information Technology Index – which represents one of the most popular "risk on" sectors – is down 3% since the start of December. And a lot of individual stocks within the sector are down far more.

For folks holding consumer-staples stocks, the change of pace was welcomed.

But the consumer-staples rally is likely winding down, at least in the short term...

One of our favorite ways to gauge trader sentiment in our DailyWealth Trader service is with the bullish percent indexes (BPIs). A BPI tracks the percentage of stocks in a sector that are trading in a bullish pattern. It ranges from zero to 100.

In the chart below, you'll see the popular Consumer Staples Select Sector SPDR Fund (XLP) – the black line – and the consumer-staples sector BPI – the blue line.

Over the past two years, the consumer-staples BPI reached overbought territory four main times. The past three times were all in 2020... And XLP either dropped hard or pulled back within the next couple of months.

The fourth time is right now. XLP jumped 11% from December 1 to January 4... And on Friday, January 7, the consumer-staples BPI reached 91 – well into overbought territory. Then, last Monday, the BPI turned lower for the first time since the end of November. It closed the day below 88... 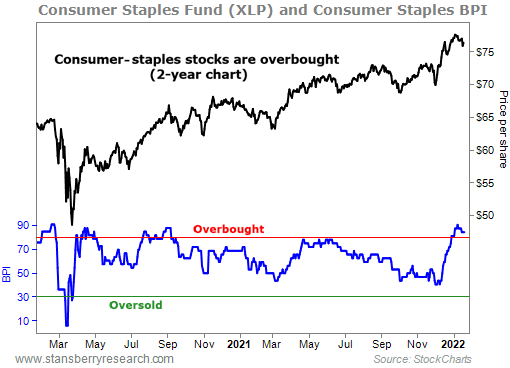 The turn lower from 91 to 88 represents a change in momentum. And it's a sell signal for the sector.

These signals don't always play out immediately. But most of the time, they serve as a good trading alert.

If you hold consumer-staples stocks as long-term investments, this isn't a reason to panic and exit your positions. The sell signals in April and September of 2020 led only to 6% and 7% drops in XLP, respectively, from peak to trough. So for your style of investing or trading, you'll likely be able to ride out the volatility.

If you caught the jump in consumer-staples stocks as a short-term speculation, though, now is likely a good time to book your profits...

Or, if you're considering buying or placing a bullish trade within the sector, you'll probably get a better opportunity in the days or weeks ahead.

Editor's note: In DailyWealth Trader, Ben and Drew share income-generating techniques, recommendations, and more to help you navigate the markets. Recently, they've covered a big uptrend forming in commodities... explained how to buy two top cryptocurrencies at a steep discount... and discussed how to trade sectors that are falling back to Earth. Learn how to access it all with a free trial subscription right here.

"Most folks want other people to like and agree with their investment ideas," Ben writes. But it's often an indicator that the trend will reverse soon when everyone agrees about an asset. And that's exactly what we saw recently... Read more here: Two Ways to Profit as This Consensus Bet Reverses.

When so many investors are piled up on the same side of a trade, it can be scary to bet against the crowd. But it's usually the right move. And it's exactly the kind of setup we're seeing in one asset today... Learn more here.

Today’s company is steady and “boring”…

Crown (CCK) is a $15 billion leading packaging company. With operations in 47 countries and 33,000 employees, Crown supplies the kind of containers you usually never think about – like soda and beer cans, bottle caps, food packaging, and aerosol cans. It may not be flashy, but this “boring” business model is paying off… Crown reports that global beverage can sales volumes grew 3% in the third quarter. Net sales grew 17% to $2.9 billion year over year. And the company repurchased $759 million in shares year to date through October 22.

As you can see, CCK shares are in an uptrend. They’re up roughly 140% over the past three years, including dividends. And as Crown continues to provide packaging around the world, that solid performance should continue… 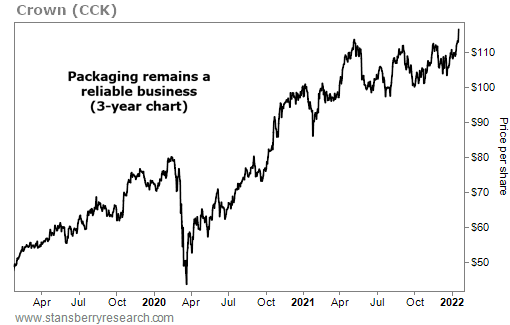