Steve Jobs' visionary status was built on reacting to and learning from the things around him...

Growing up in Silicon Valley, Jobs was fortunate enough to have access to a computer in NASA's Ames Research Center. He started with computers at such a young age. And that led Jobs to spend his life dreaming about what computers could do.

His love of computers led him to cross paths with his future business partner... As teenagers, Jobs and his childhood friend Stephen Wozniak began to build electronic devices together.

Computers were prohibitively expensive at the time. So like many tech hobbyists, they decided to build them from scratch for much less money.

From that passion project, the two Steves realized they might be able to build computers at a reasonable cost for other people.

Just eight years later, they formed Apple. It took time to pay off – but visionary ideas often do. And it set events in motion that led to a new technological wave...

The Apple I was the first computer that Jobs and Wozniak built. It was a failure, selling only 175 units total.

However, a year later, they released the Apple II, which became one of the first successful mass-produced computers.

Thanks to the popularity of the Apple II, Apple gained significant attention in the community. Between 1977 and 1980, Apple grew its sales by 252 times and quickly became the leading computer manufacturer in the U.S.

But it was the next visionary leap that would truly transform the company – and our lives. In short, Jobs knew he had to make computers more accessible...

He could see that most people would find computing inaccessible if the first thing they saw when they turned it on was a green or white line of code on a blank screen. These prompt-based operating systems expected too much knowledge from users just to get started.

Jobs knew PCs weren't yet at a point where they could see true mass adaption. Then, when he visited the Palo Alto Research Center ("PARC") in 1979, he finally realized what was missing...

He booted up Xerox's (XRX) new Alto computer – and found that he didn't have to enter any lines of code. Instead, it had a graphic user interface ("GUI") operating system controlled by a mouse. Users could simply click through icons instead of memorizing lines of code.

Xerox never sold Alto's GUI as a commercial product. Convinced that it was destined to be an expensive workstation, Xerox executives only sold the Alto and its successor, the Xerox Star, to universities and research centers. In today's money, it was priced at about $45,000, well outside the budget of most at-home users.

Jobs knew that was the wrong idea. He knew computers were bound to be everywhere at some point... but only if they were easy to use.

So, he abandoned Microsoft's (MSFT) MS-DOS platform on which the Apple II had been built. He developed Apple Lisa, naming the operating system after his daughter... and launched it in 1983 as the first GUI-controlled personal computer available to the masses.

Unfortunately, Apple Lisa was a commercial failure. In what would become a pattern for Jobs, he was so far ahead of the curve that it took the market years to catch up to him.

But the following year, Apple launched the Macintosh...

It was the first mass-production PC with a GUI-based system, a built-in screen, and a mouse. The Macintosh offered many new features for users: The icon-based GUI helped users navigate easily, the menu bar allowed easy access to apps, and the "Finder" helped find documents and applications.

The Macintosh was a smash hit. It was termed "the first $2,500 impulse item" because of how it brought the GUI to the masses before everyone recognized they needed it.

For the rest of the 1980s, Apple continued to thrive on the back of Jobs' vision with Macintosh...

He had such foresight about what was needed that Apple was able to ride on the back of his innovation for almost half a decade after he was pushed out in 1985.

But without Jobs' innovative vision to push the company forward, Apple's profitability started to decline in the early 1990s.

Jobs' "final prophecy" is now starting to play out...

The inventor and business magnate's final prediction came only months before he passed away in 2011. He said the next phase of technological development would bring a "new era." It was an inflection point that would repeat the transformative progress of the digital revolution – and move us beyond it.

We're entering that new era now. And if you think you know what that new technology looks like, you might be surprised...

The rest of the market today is focused on cryptocurrencies, 5G, electric and self-driving cars, the blockchain, artificial intelligence, virtual reality, non-fungible tokens, space exploration, and cloud computing... But they're missing the bigger picture.

These are all digital technologies. And although most investors don't realize it, they are largely yesterday's news.

Much like his original vision for PCs, Jobs' final prediction didn't get much attention at the time. Few people understood what he meant.

But today, with so many tech stocks crashing, it's becoming clear that Jobs' "final prophecy" is coming to life right now.

That means it's time to invest beyond the "old" new wave of tech. And it's crucial to do so now, while no one is paying attention. Just think... Since 1983, before the Macintosh (or even the Lisa) came out, Apple's stock has returned an incredible 146,888%.

When you're ahead of your time, no one gets it. They don't even see the trend is possible. But the market has already seen the best days of the digital revolution...

If this visionary's last prophecy was right, what's coming now will be much, much bigger.

Editor's note: In a recent presentation from our friends at Altimetry, Joel reveals Jobs' final prediction... explains exactly how it will transform the economy and your investments... and why early investors are set to profit from a historic wave of stock market wealth. He even shares the name and ticker symbol of his favorite way to get in (no e-mail address, credit card, or phone number required). Get the full story here.

The past few years have shown that one type of tech business is a great investment. And even though this company isn't the next new thing, it could be a massive winner as the current trend plays out... Read more here: This 'Better' Software Business Is Flaunting Its Data Advantage Today.

Using conventional metrics, it's hard to justify how Amazon became the e-commerce giant it is today. But by revealing the truth about its profitability, Joel reveals why this behemoth is still growing... Get the full story here: Amazon's Profitability Is an 'Iceberg' Under the Surface.

Today, we’re looking at a company that benefits as the population ages…

Regular readers know our colleague Dr. David Eifrig has been bullish on health care stocks for years. As Baby Boomers age, they will need to spend more on medical care – creating a massive tailwind for businesses in that sector. Today’s company is a perfect example…

McKesson (MCK) is a $40 billion global health care behemoth. It distributes medicine, lab supplies, and equipment, while also providing software, consulting, and other services for pharmacies, doctors, and drugmakers around the world. McKesson’s sales hit $69 billion in the most recent quarter, up 10% year over year. This was driven by an 11% revenue boost in the U.S. Pharmaceutical segment – up to $55 billion in the period.

As you can see in today’s chart, MCK shares are up more than 50% over the past year… And they recently hit a fresh all-time high. As health care remains paramount during the pandemic, this uptrend should continue… 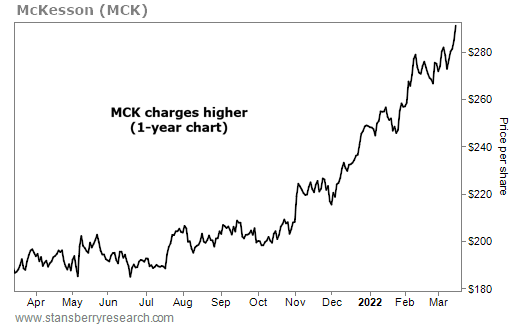