Stock Market Bulls Have Disappeared
By Brett Eversole
Tuesday, May 3, 2022

Individual investors are the least bullish they've been in 30 years.

I'm not kidding. That includes the COVID-19 bottom... the housing collapse... and even the dot-com bust.

You've got to go all the way back to 1992 to find a time when these folks were less excited about buying stocks. And as contrarians, that negativity is worth noting.

Markets tend to bottom when no one is excited about buying. That's where we are today, based on this indicator. And according to history, it'll likely lead to near-20% gains over the next year.

There are plenty of ways to track investor sentiment. The simplest way is this... Ask them.

The American Association of Individual Investors ("AAII") Investor Sentiment Survey falls under this category. It's a weekly poll of individual investors. Respondents indicate whether they're bullish, bearish, or neutral on stocks over the next six months.

Simply put, the poll asks folks how they feel about the market. And it has been doing exactly that for more than three decades.

Not surprisingly, the poll is a useful contrarian indicator. It tends to show that investors are less bullish and more bearish near market bottoms.

Earlier this month, the survey showed the lowest bullish reading in 30 years. Take a look... 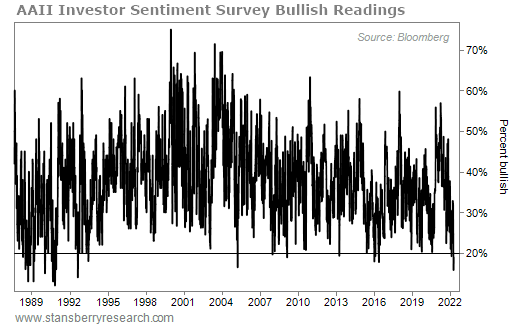 We haven't seen a bullish reading this low since 1992. And there have only been a handful of other readings below it... ever. All of them took place in the late 1980s and early 1990s.

It's crazy to think about. Stocks are just 14% below their all-time highs. But investors are less bullish than they were at any time in the past three decades.

Again, this is good for us as contrarian investors. That's because stocks tend to do darn well after a bullish survey reading of 20% or lower. Take a look...

This is a rare setup. It has happened just 2% of the time over more than 30 years. But it's a surefire way to make outsized gains.

Stocks have risen 7.8% in a typical year. But by investing after an AAII bullish reading of less than 20%, you can crush that return...

Similar setups have led to 11.7% gains in six months and an 18.2% gain over the next year. That's more than double the standard return for stocks.

Even better, this strategy is near perfect. Stocks were higher a year later in 37 of 38 instances. That's an incredible 97% win rate.

Simply put, when bulls disappear, stocks rally. Investor bullishness is at a 30-year low right now. And that means higher stock prices are likely on the way.

The trend is down for now. But know this...

Bad times – like we're experiencing today – are the market setups that lead to big gains in the future. So when the trend reverses, you need to be ready to step up and buy.

"Folks today want their money parked where nothing bad can happen to it," Sean Michael Cummings writes. And with investors keeping their money on the sidelines, now is the perfect time for us to jump in before the trend reverses... Read more here: The Music Is Playing, but No One Wants to Dance.

"Instead of being fearful, I want you to be greedy," Steve says. Bullish sentiment among individual investors has plummeted recently. But history shows this could be a setup for a massive rally if we ignore the noise and invest... Learn more here: Why Stocks Could Nearly Double by 2024.

Today’s company has been struggling to regain its footing…

We’ve often mentioned that the U.S. government spends a fortune to maintain a military presence around the world… so much so, that we refer to defense contractors as “offense” contractors. But today, this offense contractor is struggling after having to foot the bill on one of its deals…

Boeing (BA) is a $90 billion plane maker. It provides the U.S. military with attack helicopters, fighter jets, and more. But the massive decline in air travel during the pandemic hurt its commercial division… as did the 18-month grounding of its 737 Max. Then, to make matters worse, Boeing recently said it lost more than $1 billion in costs related to its new Air Force One fleet and its new T-7A trainer jet for the Air Force. The company posted $14 billion in first-quarter revenue, down 8% year over year.

As you can see in today’s chart, BA shares are falling. They’re down roughly 60% over the past year… And they recently hit a new all-time low. As the airline industry slowly returns to normal, Boeing will have to remain patient… 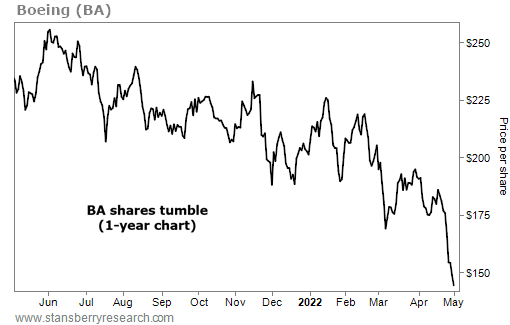