looks wise â until its utter foolishness is revealed..." />
The Fools Can't Find a Risk They Don't Like
By Dan Ferris
Friday, February 11, 2022

Buying what's popular is not a mistake – when you're buying almost anything other than stocks...

You buy a Ford F-150 pickup truck or a Samsung smartphone because their popularity is a sign of their quality and consistency.

But in financial markets, "following the herd" only looks wise – until its utter foolishness is revealed.

Right now, we're seeing exactly what that looks like...

The ARK Innovation Fund (ARKK) is now officially a loser...

Simon Lack of SL Advisors pointed this out in a recent blog post, titled, "ARKK's Investors Have In Aggregate Lost Money."

In the post, Lack does the math to show what any experienced stock market participant knows... More investors join a manic bull run at the top than at any other time.

The situation with ARKK is no different. The fund focuses on disruptive tech innovators. That made it a magnet for foolish investors who were ready to pile in at exactly the wrong moment. As Lack wrote...

[B]ecause inflows to ARKK followed strong performance, as is usually the case, it turns out that the cumulative P&L on ARKK is negative. [The total cumulative profit earned by ARKK investors since its inception] peaked last February at just under $12 [billion] and has been in steep decline ever since. At the beginning of this year, it crossed into negative territory. The average dollar invested in ARKK has lost money.

One more time... The average dollar invested in ARKK has lost money, despite the fund being a four-bagger since inception. That's because most of the money came in at the top.

The same thing happened to hedge-fund investors during the financial crisis. According to Lack...

By the [time the] 2008 financial crisis [arrived], the hedge-fund industry was big enough that in one year it lost all the earlier profits ever generated for investors.

As I often note, fools do in the end what the wise do in the beginning.

Lack's work adds nuance... When the market includes so many fools, they can turn any investment into a disaster simply by liking it enough all at the same time. And it sure seems like every fool in the world fell in love with stocks in 2021...

Last September, Bank of America reported $1 trillion had flowed into global equities up to that date from the beginning of 2021. That was more than the previous 20 years of flows combined.

Every last fool came out of the woodwork last year and went all-in.

Here's the thing the herd doesn't realize... After they've bet (not invested) every spare penny they have, there's nobody left to buy.

So, as the market tries to shake off last month's correction, this seems like a good time to discuss how to avoid being a fool...

The core of every successful investment strategy is avoiding risk. Otherwise, the strategy will eventually take on a risk it shouldn't and lose all the profit it made – just like all the fools who bought into the housing bubble before the financial crisis... and ARKK at its top a little less than a year ago.

We all know this... or we should. But how many investors believe it?

Tell me truthfully, when Warren Buffett says there are two rules to investing and Rule No. 1 is "Don't Lose Money" and Rule No. 2 is "See Rule No. 1"... do you really believe him? He's looking to make money, not merely avoiding losing it... right?

The two-rule adage is one of the all-time great investment truisms. However, it involves more than Buffett's folksy midwestern wisdom suggests.

What follows might earn me the title of Captain Obvious... but I would prefer that to Captain Obfuscator.

The two-rule adage really means something like, "You can't make money in the market without placing your capital at risk. But you need to know the difference between a risk worth taking and one not worth taking, and there are a lot more risks you shouldn't take than you should take."

That's the obvious part. Now, here's where it gets a little more complicated...

"Learning to identify the good risks is more about avoiding the bad ones than most people realize... To be successful, you have to do a lot of work that results in not taking any action. Also, a catastrophic loss can wipe out years of compounding and must be avoided."

Doing a lot of work that leads to taking no action is an especially big problem for most investors. People want action. They want to buy and sell every day. And they want to make a lot of money and feel great about it all the time.

But investing doesn't work that way...

Investing is a creative endeavor. And creative endeavors often mean doing work that doesn't generate any concrete result. (Just as an example, famed architect Frank Lloyd Wright designed more than 1,000 structures in his life – but only 400 of them were ever built.)

Most people find this seeming lack of action uncomfortable. So people overtrade their accounts and lose too much money taking bad risks... rather than avoiding the bad risk by putting in a lot of work just to "do nothing."

Here's what I mean. When it comes to researching stocks, you'd be lucky to find that 40% of all the stocks you look at are worth owning for the long term. If you're truly embracing Buffett's two-rule adage, it's probably less than 4%.

The actual percentage isn't what's most important. What matters most is understanding that it's desirable and healthy not to want to buy most stocks most of the time...

That's particularly true for those stocks being snatched up in a speculative frenzy when fools are betting more in a year than in the last 20 years combined.

These days, fools can't find a risk they don't like... Make sure you're not one of them.

Editor's note: Inflation just hit its highest levels in 40 years. And as a result, Dan says a lot of investors are about to get completely blindsided. But you can protect yourself... The last time inflation rose this quickly, gold skyrocketed 1,300%. If you invest in gold the way he recommends – hint: not through popular gold fund GLD – it could be the cornerstone to protecting your wealth... Check out Dan's recent interview to learn more.

When investors are pouring record amounts of money into any asset, no matter how expensive, you can be sure that we're in a bubble. And when it bursts, you need to be prepared for the fallout... Get the full story here: Speculative 'Can't Lose' Psychology Is On the Loose.

No matter what the markets are doing, it pays to be prepared. Even the best investors don't know what will happen in the future, so you need to make sure your portfolio is ready for anything... Read Dan's five basic strategies for enduring any market environment here.

Longtime readers know we’ve mentioned that the U.S. military is often involved in conflicts around the world. It spends billions on the weapons and technology needed to fight these battles… turning to defense contractors so much that they may as well be called “offense” contractors. Check out this example…

Raytheon Technologies (RTX) is a $140 billion military supplier. It produces precision weapons, military electronics, and other products demanded by our armed forces… And it’s regularly one of the Pentagon’s prime contractors. In December, the Department of Defense awarded Raytheon a $578 million contract to produce missiles that will help protect Navy ships. As Russia masses troops on the Ukrainian border, nobody’s about to call for weakened military spending.

As you can see in today’s chart, RTX shares have soared in recent weeks. They’re up more than 30% over the past year… And they recently hit a fresh 52-week high. As tensions continue to loom overseas, this “offense” contractor should have no shortage of business… 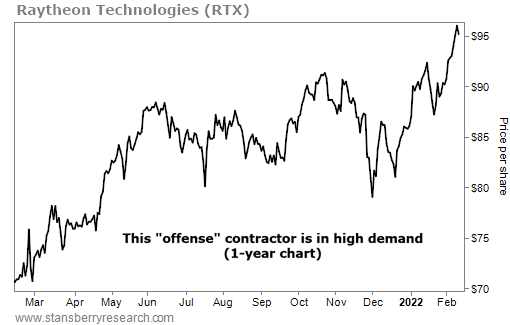