Stocks Are a 'Fat Pitch' Once Again
By Steve Sjuggerud
Thursday, June 4, 2020

Since World War II, nobody has batted over .400 in Major League Baseball. Nobody, that is, except Ted Williams.

Many sports fans are aware that he accomplished this feat. But most fans don't know that going into the final day of the 1941 season, the odds weren't in Ted's favor...

Ted had so far achieved a batting average of .395 for the season. With not one, but two games scheduled for that day, he'd have roughly eight chances to improve his average.

If he broke .400, his name would be in the history books as one of the best batters to ever step up to the plate.

Ted's success wasn't simply rooted in athletic ability, though. He was a data cruncher. And the way he approached the batter's plate can surprisingly teach us a lot about investing, too... especially now.

Ted had two things going for him beyond his obvious athletic ability...

First, as many sports fans know, his ability to "see" the ball was legendary. He had 20/10 vision. That means he could see from 20 feet away what a "normal" person could see from 10 feet away.

Second, and less talked about, is that Ted was basically a number cruncher. He wanted to know how he could put the odds in his favor each time he stepped up to the plate...

To do this, he compared his chances of hitting the ball based on where a pitch crossed the plate. He was looking for the "sweet spot" in the strike zone.

Ted knew if he could stop swinging at pitches he couldn't hit well, he could increase his chances of getting a hit. By thinking critically and working hard, he could improve his odds.

To put it simply, he tightened his personal strike zone. He only swung at "fat pitches." And it led to one of the highest batting averages in baseball history...

On that fateful final day of the 1941 season, Ted recorded six hits on his eight at-bats. He finished the regular season with a .406 batting average.

Only a handful of players had achieved a batting average that high before him. And after the 1941 season, no Major League Baseball player would repeat it.

I would perform far better as an investor if I followed Ted's lessons. I crunch plenty of numbers. But every now and then, I swing at bad pitches.

The better plan is to survey the market... and only make bets when the odds are in your favor. Today, doing that leads to a surprising conclusion...

The odds of making a profit in stocks are dramatically in our favor right now.

That might seem crazy given the COVID-19 panic that's still gripping the world. But I look at it a bit differently.

Right now, most folks are scared. They're selling, expecting the worst to happen.

The reality is that things are getting less bad. The COVID-19 health crisis data isn't great... But it's less bad than it was two months ago. Similarly, the economic numbers are bad... But they're less bad than what we saw in April.

On top of that, the market is soaring. The S&P 500 is now in a clear uptrend after jumping 38% from the March bottom.

Longtime readers know I always follow the trend. And my friend, the trend is up. Who are we to argue?

Ted Williams made history by only swinging at the best pitches. As investors, we can improve our returns by doing the same... only buying when the time is right. When we have a "fat pitch."

I know it's scary out there. But that "fat pitch" is here now. Take advantage of it.

"Could the next sharp fall be right around the corner?" Chris Igou asks. After the fastest bear market in the history of U.S. stocks – and an ultra-aggressive rally – lots of investors are wondering what stocks will do next. Thankfully, recent market action gives us a little insight into what to expect... Read more here: What to Expect After the Major Rally in Stocks.

The choice is yours: Either invest when you feel the market fits your investment bias... or put money to work when the data shows the odds are in your favor. While it's scary out there today, the data tells us that we could be looking at further gains ahead... Get the full story here: What's Really Going on With Stocks and the Economy.

Every day, more folks embrace online payments, electronic money transfers, and other cashless transactions. It’s convenient and secure… And with folks worried about the coronavirus, it’s much cleaner than going to a store and handling a lot of bills and coins. Take a look at this financial-technology giant…

PayPal (PYPL) is a $185 billion electronic-payments leader. In addition to its namesake service, its numerous other products include Venmo and Xoom. These products have enjoyed growing demand for years, but it shot up amid COVID-19. In April, more than 7.4 million people signed up for new accounts… a monthly record. And on May 1, it processed more payments than any other day in company history.

PYPL shares have been soaring for several years. And they’ve shot up about 80% just since their March lows. The coronavirus has forced many people to try PayPal’s services for the first time – and they’ll likely stick around… 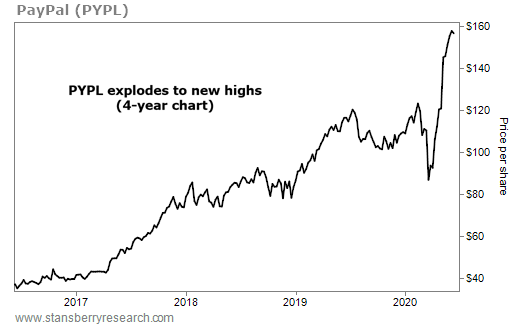