It's often tough to separate the two, though. Most folks have strong political opinions. And it's easy to drag those into your investments.

Imagine you're a green-energy activist. You might love the idea of solar energy, so you put your money to work in First Solar (FSLR) – a leader in the industry.

But if you'd bought it at the stock market bottom in 2009, you wouldn't be sitting on massive profits today. Instead, you'd have lost more than half of your initial investment.

Similarly, if your political interests aligned with fossil fuels, you might have invested in the coal industry. That again would have been a bad investment decision based on politics... especially if you invested anytime in the last seven years. The entire coal sector is down around 70% from the latest peak in 2011.

The simple fact is that you don't want to make individual investment decisions based on your political beliefs. It clouds your judgment and makes it hard to see mistakes.

Still, that doesn't mean we can't learn anything about the markets from politics. In fact, it gives us one of the most impressive market indicators out there.

Importantly, it says we're about to enter the best couple of years for stocks. The biggest profits are likely to come over the next 12 months... And it could mean huge gains as the "Melt Up" unfolds.

Stocks are about to boom – potentially for as long as two years – thanks to our current spot in something called the "presidential election cycle."

It has nothing to do with President Trump's next tweet or a piece of legislation. Instead, it all comes down to the lessons of history we've learned from elections.

You see, on a broad level, politics does have a surprisingly large effect on financial markets...

It's a bit hard to believe until you actually see the numbers. But once you do, it's hard NOT to give this wild idea some credit.

Again, I'm talking about the presidential election cycle. This doesn't have anything to do with who's in office, but when they're in office.

This indicator tells us that certain years of a president's term tend to be dramatically better than others for the stock market. You can see the full details in the table below... 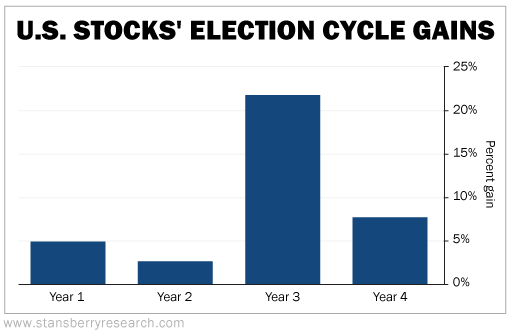 As you can see, there's a BIG spread between yearly gains in the presidential election cycle. And the third and fourth years are the best, by far.

We've typically seen gains of 21.6% during the third year. Year four is the second-best performer, leading to 7.7% gains, on average.

(We use quarterly data in this analysis, which uses September 30 as "year end." Based on that, we're about to begin the third year of President Trump's first term.)

Again, it doesn't matter who's in power – Republican or Democrat. The year of their term has the greatest impact on stock market returns.

This is great news today. That's because year three is about to begin. It officially starts at the end of the month. And that means we could be in for two more years of fantastic gains.

Of course, this isn't foolproof. Bad third years have happened too, and you get plenty of variability in the results. Stocks have soared as much as 39% during year three... But they've also fallen as much as 48%.

Still, the message from this indicator is powerful:

We're about to enter what is typically the absolute best 12-month period to own stocks. And we could see up to two years of fantastic profits, thanks to this election-cycle indicator.

With the Melt Up in place, this is one more reason to be excited about the opportunity to own stocks now. We're about to enter the market's best 12-month period for profits. Don't miss it.

"Investors usually don't understand that big global events are often NOT big stock market events," Steve writes. As he explains, politics and global relations do matter – they just don't always matter to your investments... Learn more here: North Korea Versus the 'Melt Up.'

Stocks are going up. And one group of stocks is outperforming the broad market right now. For more details on exactly where to put your money for the biggest gains during the Melt Up, read more here.

According to the U.S. Census Bureau, all Baby Boomers will be older than age 65 by 2030. And – as our colleague Dr. David Eifrig has said for years – America’s aging population is sure to drive health care stocks higher. Older folks rely more on medicine, testing, and trips to the doctor. Today, we’re looking at a business that supplies the industry…

And as you can see, BAX has more than doubled in price over the past three years. This marks a new multiyear high for the stock. Doc’s bullish call on health care stocks continues to be a safe long-term bet for investors… 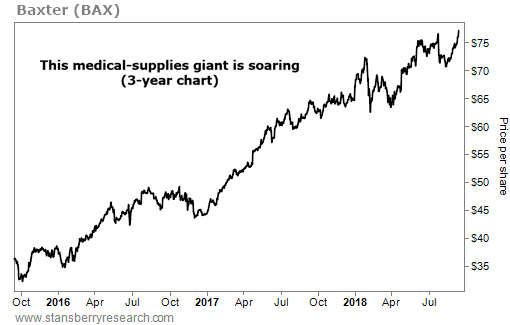