The Best Example of How Coronavirus Panic Could Play Out
By Brian Tycangco
Tuesday, March 10, 2020

That's the CDC's best advice on how to avoid catching the new coronavirus. And while it's simple, this advice makes a lot of sense.

The simple act of washing your hands with soap for 20 seconds is the first step – and likely the most important step – in stopping any virus dead in its tracks. Yet before the outbreak of COVID-19, this common-sense practice was just an afterthought.

Now everybody is doing it... And when it comes to bigger preparation measures, most are actually overdoing it.

That's called panic. Panic is what empties the shelves of cleaning products at Costco and Target. It's what shuts down travel and turns busy commercial centers into ghost towns.

It's also what drives markets down fast and hard... and creates big opportunities when the dust settles.

Those opportunities don't come along very often. But when they do, it's important that we stop panicking and take a look at what's really going on.

Fortunately for us, we've got a road map for how things could shake out. All we have to do is look to where the virus first got started... China.

First, China is getting back to business. Despite what you're hearing in the news, the country where it all started is slowly returning to a sense of normalcy.

New infections are down to a trickle compared with just two weeks ago. China is seeing fewer new cases than several countries, including South Korea, Iran, and Italy. And the number of Chinese patients who have recovered now surpasses the number of people currently infected.

Meanwhile, Starbucks (SBUX), which has nearly 4,300 outlets in China, has reopened 90% of its stores. And nearly all of the country's migrant workers have returned to their home cities since the Lunar New Year concluded, which had been a major source of worry for potential spread.

Second, delay doesn't mean destruction. What I mean by this is that demand for a lot of things – particularly big-ticket items and travel – is taking a hit. But only temporarily.

People who were looking to buy a new home before the outbreak will likely resume their search after the epidemic blows over. Consumers will return to the malls... cars will roll out of the assembly lines... students will return to school... and Apple (AAPL) stores are going to be packed again.

Third, China's stock market is doing great. While most major markets are down dramatically so far in 2020, the Shanghai Stock Exchange Composite Index has only posted small losses. And since the end of the Lunar New Year, it's jumped 8%. Take a look... 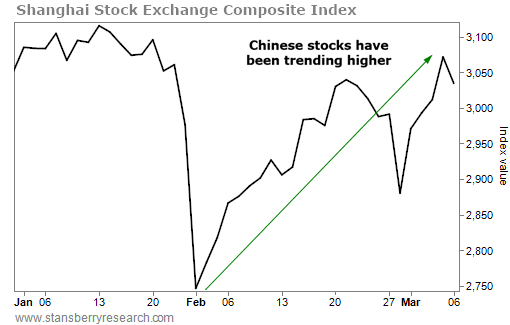 It's not obvious to most people yet. But China's powerful recovery could be a road map to how the U.S. and other markets fare in the coming months.

China took the worst hit from COVID-19 first. Its markets fell hard as a result, and its economy took a hit. But now things are settling down. And the Chinese stock market is responding.

In China, the panic is over. The country's markets have become more stable as a result. And if we take a step back from the media panic, we can see that better days are ahead.

I expect the U.S. market will see a similar recovery in the coming months. And if that's how this plays out, we'll look back at this time as one of the biggest buying opportunities of the Melt Up.

"Volatility is back, and the fears driving today's market action are scarier than ever," Vic Lederman writes. But acting erratically and panicking can lead you to selling at the exact wrong time. That's why now is the perfect time to practice putting your mind at ease... Read more here.

"If you're worried about stocks, you're not alone," Chris Igou says. But the conditions driving the current Melt Up are still in place. And that will keep fueling the boom once perception turns around... Learn more here.

Market Notes
THE COST OF MISSING OUT

When a company misses out on a powerful trend, it can send its share price tumbling…

Regular readers know we love investing in leaders of secular trends. Game-changers like streaming and mobile payments have reshaped industries in a lasting way – creating many market winners. These trends serve as a tailwind for growth… and can even give companies a leg up on the competition. But when a company gets left behind, its share price suffers…

BlackBerry (BB) pioneered the use of the Internet and e-mail on cell phones in the early 2000s. But the company hasn’t kept up with the recent innovations from Apple (AAPL) and Samsung. As a result, BlackBerry has exited the smartphone business altogether. Instead, it’s focusing on a software business that only brought in $1.1 billion in the last 12 months… compared with the company’s peak revenue of $20 billion in 2011.

As you can see in today’s chart, BB shares are hitting new lows. The stock is down more than 50% over the past year alone. It’s yet another example of why you should invest in companies leading powerful trends – and stay away from the ones falling behind… 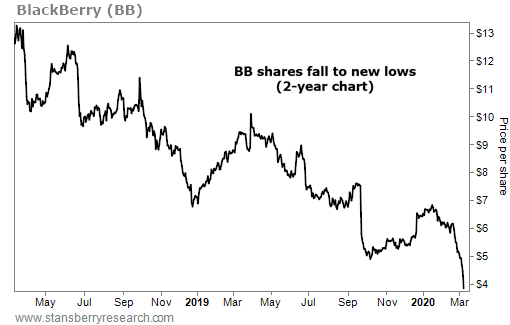