The 'Melt Down' Won't Happen Until This Changes
By Chris Igou
Tuesday, March 3, 2020

If you're worried about stocks, you're not alone.

Last week was the worst for the markets since 2008. It was a brutal sell-off. And it has a lot of folks wondering if the "Melt Down" is already here.

But that isn't the case, as I'll share today. And it's because of the very "DNA" that makes a Melt Up.

It's the setup that's driving today's bull market. Without it, we wouldn't be in the thick of a Melt Up... And the Melt Up can't end until this key measure changes.

Importantly, it hasn't changed in the recent correction. Instead, the DNA that drives the Melt Up is hitting all-time highs. And that should keep fueling today's boom.

Asset bubbles all have one thing in common... easy money. That's what makes the broader market environment extremely favorable for investors.

It happened in the late-1990s Melt Up... It happened again during the U.S. housing boom... And importantly, we're seeing it again today.

These easy money environments sparked incredible blow-off tops. And while it might seem crazy given the recent market action... I expect a huge boom to happen again this time around.

Still, you might be wondering... what exactly is "easy money?"

A simple way to see it is to look at the Bloomberg U.S. Financial Conditions Index Plus (BFCI+). It shows just how easy investors have it today.

The index tracks the stress of the financial system. It looks at indicators in bonds, equities, housing, money markets, and more to gauge the cost of credit.

If borrowing costs are high, it means there's a lot of financial stress on the markets. A low cost of borrowing signals easy money for investors.

The higher the BFCI+, the lower the cost to borrow money – so the higher the index ranking, the less financial stress there is.

Today, the BFCI+ reading is the highest on record... going back 30 years. Check it out... 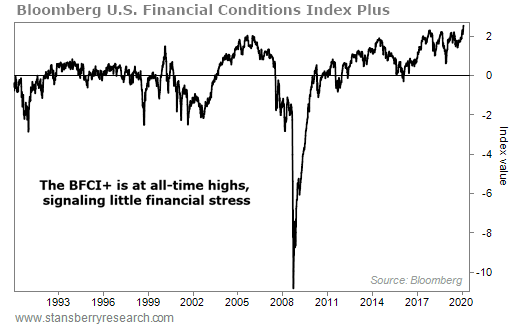 This is the easiest time to borrow money that we've seen in decades. These conditions have helped this 11-year bull market run so long... And now, they make up the very DNA of today's Melt Up.

Importantly, we saw similar conditions during the last few booms. Money was easy in the late 1990s and mid-2000s. And both times it led to a massive Melt Up... first in dot-com stocks and then in real estate.

Money is "easy" again today. And I expect it to propel stocks even higher from here.

Now, don't get me wrong. Eventually, the easy money will run out. That will trigger the inevitable Melt Down. But we aren't there yet...

That's why I don't expect the recent correction to turn into a full-blown Melt Down. The conditions simply aren't in place for that to happen.

The easy money continues to flow. The cost of borrowing is as cheap as it has been in decades. And the Melt Down can't happen until that changes.

You can't successfully manage your portfolio by panicking. Instead, you need to know what you can do when fear takes hold... Read more here: These Two Steps Will Help You Manage Fear.

"There could easily be months, or even a year or more, of gains ahead of us," Vic Lederman writes. And if you get out of the market too early, you could miss out on some of the biggest profits before the end of this bull market... Learn more here: Don't Board Up Your Home Yet.

Today, we’re looking at a company that’s struggling with debt…

Regular readers know we love capital-efficient businesses. They don’t have to reinvest heavily in their businesses to grow. Instead, they can use their earnings to reward shareholders through dividends and buybacks – or even pay down debt. But when companies have high debt loads and expenditures, look out…

Anheuser-Busch InBev (BUD) was formed when brewing giant SABMiller merged with Anheuser-Busch in 2015. The combined company was left with a mountain of debt. As of December 2019, AB InBev had about $100 billion in “net debt” (total debt minus cash), versus about $20 billion in “EBITDA” (a measure of profitability). Simply put, the net debt-to-EBITDA ratio can be a good indicator of how leveraged a company is. And AB InBev’s ratio sits at 4.5 times… which we consider to be dangerously leveraged.

As you can see, investors are getting tired of waiting for the company to pay down its debt. Shares have fallen nearly 30% over the past year alone… And prices recently hit their lowest level since 2011. It’s another reason to avoid companies saddled with debt… 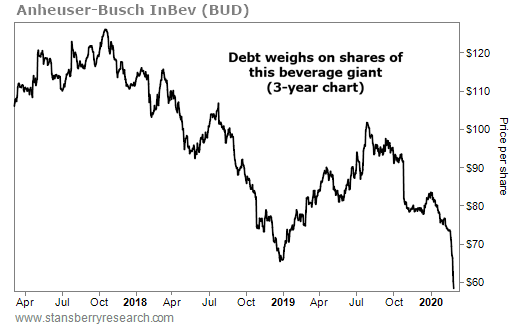