The Best Way to Take Advantage of a Weak Dollar
By Brian Tycangco
Thursday, September 3, 2020

We can turn on the AC though... or dive into a pool. And there are similar ways to turn a falling dollar into investment success.

The U.S. Dollar Index ("DXY") is down 10% from its recent high in March. That peak was just before the Federal Reserve drove down interest rates to a record low.

Now, the U.S. dollar is the weakest it has been since April 2018. And as an investor, you need to take notice...

When the dollar is weak, everything America imports becomes more expensive. And we all know America loves to buy stuff made by other countries.

It's not just stuff made by China, either. When combined, imports from Canada, Mexico, Japan, and Germany are worth twice the value of goods shipped in from China.

If the dollar had held its highest value reached in March, America's import bill would be smaller by tens of billions...

But it didn't. Instead, it fell 10%. Now, everything that Americans buy abroad is that much more expensive in dollar terms.

It's also why, despite China's increasing purchases of U.S. goods, the trade deficit between the two countries isn't going down nearly as fast.

Like the hot weather, most people will complain about the weak dollar. But instead of complaining, I recommend that you act. And I don't recommend you buy gold...

Since March, gold has gained roughly 34% in dollar terms – much higher than the 10% drop in the U.S. dollar index. Silver has done even better, soaring by about 140%.

But there's another asset that does well when the dollar is falling. Moreover, unlike gold or silver, this investment's rally is just getting started.

I'm talking about stocks in emerging markets. These economies tend to do well when the dollar is trending down – as it is today.

That's because most emerging market economies export commodities and natural resources. So a falling dollar means they make more money for exporting things like gold, silver, iron ore, and copper... as these assets rise in price.

These countries also tend to have large debts denominated in U.S. dollars. In times like these, they can pay less of their own currency to service their dollar debts.

Finally, emerging markets typically don't have an advanced manufacturing industry. They buy finished goods – like automobiles, televisions, and laptop computers – from overseas. And these goods are usually priced in U.S. dollars.

A falling dollar is a win-win-win for emerging markets. And those benefits can boost their stock markets in a big way.

You can see this by looking at the iShares MSCI Emerging Markets Fund (EEM), an exchange-traded fund that tracks emerging markets. When DXY lost 17% from March 2009 to April 2011, this fund rallied 136%.

But these gains in EEM were both outdone when DXY fell 24% from April 2003 to November 2007. That time, EEM soared 365% during the same period, while gold managed to only double.

Keep in mind, these powerful rallies in the emerging markets took, on average, about three years to play out.

So, even with the dollar down 10% and emerging market stocks up 45% since March... this predictable trend of profits is just in its infancy. But it won't be for long.

P.S. Given what's happening to the dollar, you'll probably do just fine buying a broad emerging market fund. But you can do much better... likely making hundreds-of-percent returns... if you buy the right stocks today. I recently put together a presentation explaining why today's opportunity is so good. You can check it out right here.

There's more than one tailwind behind emerging markets today. In fact, thanks to one recent change, this emerging market could see major gains in the near future just from its tech stocks... Get the full story here: This Opens the Floodgates to the 'New Nasdaq.'

"Most folks believe that keeping a large chunk of their savings in cash is prudent," Vic Lederman writes. But the Federal Reserve is changing the rules on us. And hoarding cash no longer means saving money... To see what that means for investors today, read the full story here: The Fed Just Changed the Definition of Saving.

Market Notes
THIS RESTAURANT IS SURGING ON 'LESS BAD' NEWS

Once a stock has sold off, investors can make big money from even a partial improvement. Steve calls this strategy “bad to less bad” trading. We’ve seen lots of stocks get “less bad” this year, and this restaurant is one of the biggest winners…

Chipotle Mexican Grill (CMG) is a $40 billion fast-casual restaurant chain. COVID-19 precautions closed restaurants around the country, and investors fled restaurant stocks in a hurry. But even in its roughest quarter – the months of April, May, and June – Chipotle stayed profitable… And thanks to a 216% gain in online ordering, sales slipped less than 5% to $1.4 billion.

CMG shares fell more than 50% in less than a month earlier this year… But since these March lows, they’ve nearly tripled to a new all-time high. Even with sales down, Chipotle’s “less bad” performance brought investors piling back in… 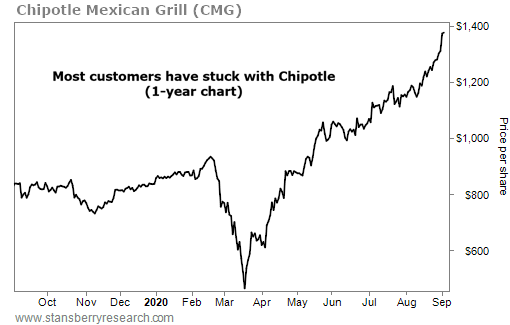